Going through some files recently, I came across a City of Minneapolis cordon count from 1948 and 1949. It shows how many people entered and left downtown on a single day in May. I also have a metro-wide traffic study from 1949, which happens to be the year I was born. Among other things, it shows daily traffic volumes on quite a few city streets. We all know the metro area is much more populous than it used to be, that traffic congestion has increased, and that transit use has fallen. I thought it would be interesting to learn a little more about how these changed during my lifetime.

When it comes to traffic volumes, the big difference between 1949 and now is the creation of the freeway system. It has diverted huge volumes off the local streets, so I wondered if the streets were busier than before the freeways. In most cases the answer is yes, they’re busier, but not always. Some actually carry less traffic than they did 68 years ago. Here are some examples. 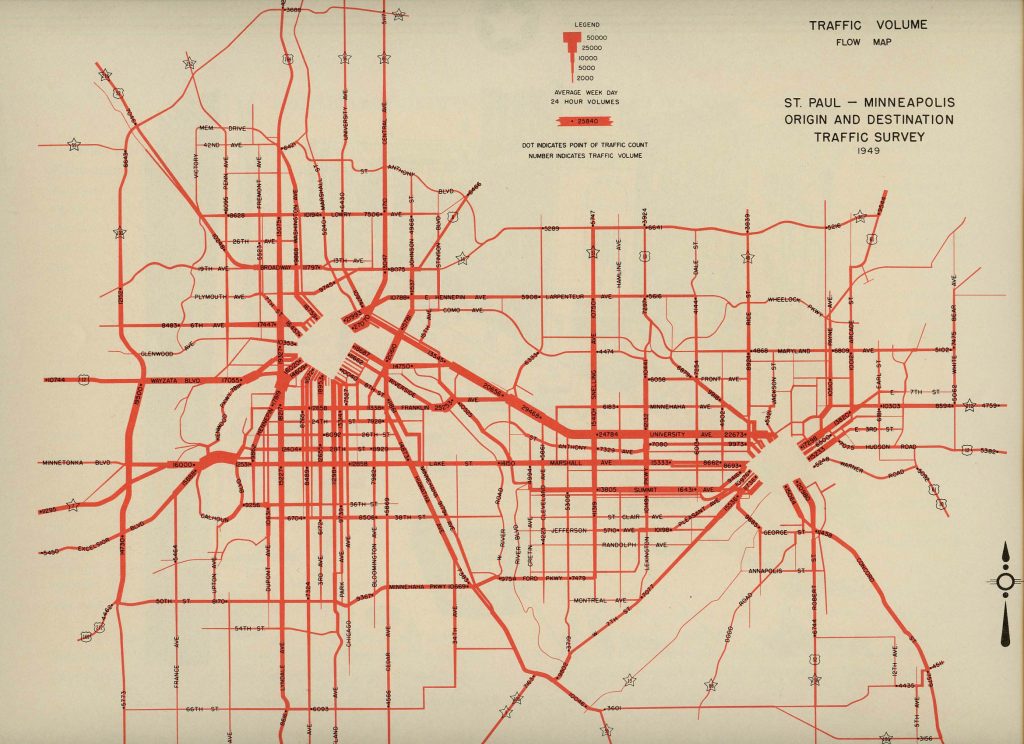 There is a clear pattern. Former trunk highways that have been replaced by parallel freeways frequently show a drop in volume. No examples are more obvious than between the downtowns, where I-94 has diverted the traffic. University Avenue, Marshall Avenue, Summit Avenue and the Franklin Avenue Mississippi River bridge carried much higher volumes than they do today. Because of the river and the railroad yards in the St. Paul Midway, there has always been a bottleneck just east of the city limits with few route options. That’s why University at Raymond Avenue formerly saw almost 30,000 cars per day, but now only 17,800. On the traffic volume maps you can also see how drivers found back road options as they tried to avoid University Avenue, because it was so congested. 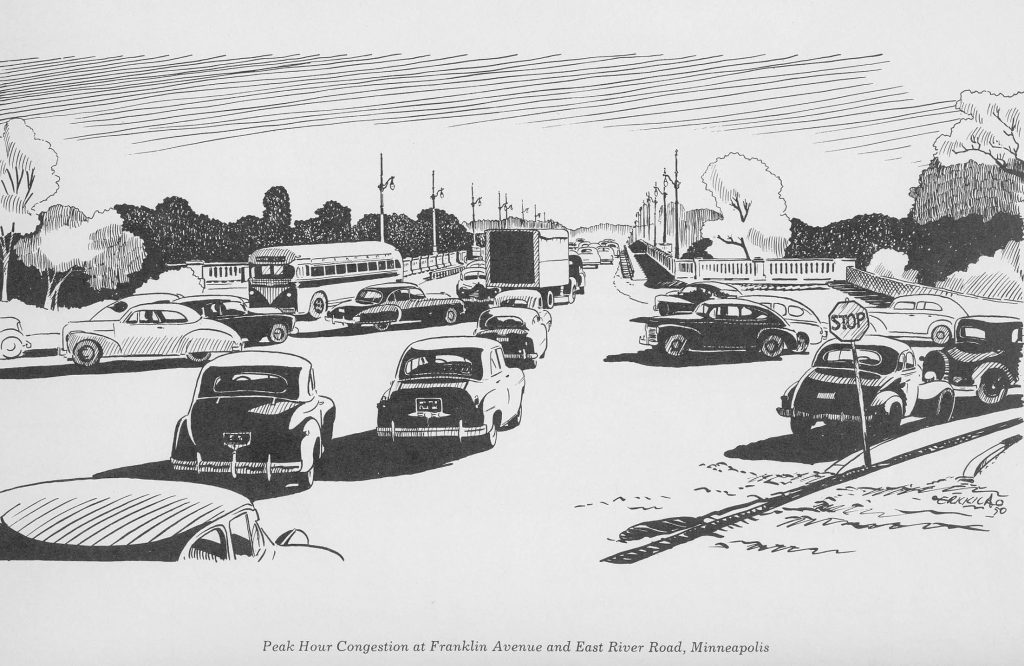 Before there was an I-94, this was rush hour at the east end of the Franklin Avenue bridge. From the 1949 traffic study.

Other examples of lower volumes are the 3rd Avenue and 10th Avenue river bridges in Minneapolis because of I-35W, and Como Avenue (formerly Hwy. 10) at Dale Street because of I-35E.

Transit modal splits then and now

There’s no question that transit ridership has eroded considerably since 1948. Back then the annual total was 188 million, slipping to 165 million in 1949. That’s probably a bit low, because it didn’t count the several small suburban bus companies. That’s for a metro area of just under 1 million population. Today the metro area is 3.5 million and the entire transit system is carrying about 95 million. According to the 1949 traffic study, transit carried 34 percent of all the trips that stayed within the metro study area. According to the Metro Council’s 2010 Travel Behavior Inventory, that number is now 3 percent.

The decline, however, did not occur evenly across the metro. Transit retreated to its strongholds, which are work trips, school trips, downtown-oriented trips and trips originating in the neighborhoods within 4 miles of the downtowns. The 1949 study surveyed transit riders and found that 62.5 percent of trips were for work or school. In the most recent Metro Council Travel Behavior Inventory, 86 percent are for work or school. For the population as a whole, work and school trips combined are 39 percent of the total. Transit clearly does better when the trip is part of a daily routine, and paid parking is involved.

It’s a little difficult to get an apples-to-apples comparison of transit rush hour trips to the downtowns, but we can come reasonably close. In 1948, a Minneapolis cordon count of motorized, non-truck trips shows a downtown modal split of 56% AM peak and 58% PM peak for transit. That declined in 1949 to 52% AM and 54% PM. In the 2010 Travel Behavior Inventory it was 39.6% AM and 41.5% PM. That’s pretty respectable and it may have creeped up since then given the opening of the Green Line LRT. The all-day downtown modal split was 27 percent.

Downtown St. Paul didn’t hold up as well. From the 1949 traffic study we can determine a transit modal split in the peak periods of 48.5 percent. That declined by 2010 to 20.7% AM and 27.9% PM. This shows how employment density, 160,000 jobs in downtown Minneapolis versus 40,000 in downtown St. Paul, makes a difference. That said, there is no 40,000 concentration of suburban jobs in this metro area, let alone with paid parking. St. Paul is still transit friendly compared to the burbs. It even achieved an all-day downtown modal split of 19.2 percent, compared to low single digits in the suburbs.