Park and Portland, as you may have heard, are in the process of being restriped to add a peak-hours-only transit lane between Lake St and 14th St. This isn’t covered in the web presence for the $239 million project, but it is happening. At the time I’m writing this, Park has been restriped, and Portland is happening next weekend. As a walker, cyclist, and transit user who lives between Park and Portland in Elliot Park, I’m concerned about the lack of process surrounding this redesign.

I attended a meeting in my neighborhood a couple of weeks ago where there were some representatives from MNDoT informing us of the impacts of the construction season on our neighborhood. A lot of time went in to discussing street closures and impacts on businesses downtown, which seemed reasonable. There was a brief mention of a restripe to add a transit lane to Park and Portland, but no diagrams or details were provided, and the meeting moved on.

If I had seen such a diagram, I would have lost my dang mind. Here’s what a group was able to request from MNDoT, less than a month before the restriping was to occur: 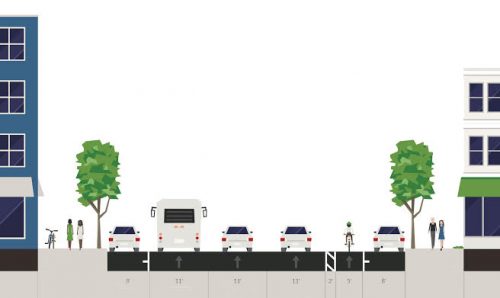 I rode Park north from 26th to get home after the restripe, and it was noticeably less safe. 16 wheelers park on Park around 22nd St regularly. Before the restripe, they were sitting on the edge of the buffer into the bike lane, still visible on the road. Now, they’re taking up half the bike lane, because a standard trailer is 8 feet 6 inches in width. Add wheels, mirrors, and a few inches for parking and instead of the 8’ allotted the trailer is taking up 10+ feet, eating up the meager 2’ painted buffer on the left side. 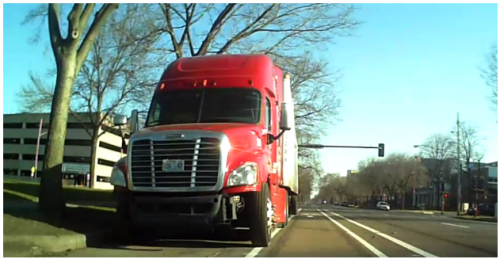 I will file 311 tickets for these vehicles, but honestly I do not have much hope they will be enforced. And on the other side of my 2’ painted buffer, there are cars which frequently travel in excess of 45 mph despite the 30 mph limit. Recently, someone was killed on Park by someone driving 60 mph through a red light. It’s also worth noting that these streets travel through communities of color – nearly all impacted blocks between Park and Portland are >50% non-white.

All this, for an absolute joke of a transit lane. There’s nothing on the street to indicate that it’s a transit lane, not even paint. It’s a lane for cars and I guess busses will use it at some point. It doesn’t look like the we are even asking cars to stay out of that lane when possible under the current setup. The 9 will probably not use it, making stops every other block and adding to the confusion, but the express busses will have to fight with the cars for use of the leftmost lane.

Even assuming the number of cars on Park and Portland doubles during rush hour, there is not a need for a third travel lane. Where there currently is a third lane, north of Franklin, it is not a safe place to be when it’s busy, cars go way too fast there, and the sunken holes in the pavement from the gas pipes that make me swerve deserve their own blog post.

One of the two lanes south of Franklin could have been given over to the transit vehicles leaving the other for car traffic and the impact to car travel times would be minimal at worst. But because MNDoT decided to skip the community engagement part of the process, there was no opportunity to voice my concerns or to ask the engineers to evaluate the streets for the needs of the people who live in my neighborhood and other connected neighborhoods against the needs of rush-hour commuters.

Should I be the victim of an accident, take this blog post and sue everyone accountable. Put the money toward preventing more deaths like mine by improving cycling infrastructure.

That’s enough doom and gloom. Here are some things we can do about it:

One relatively easy thing to do to mitigate the danger of having increased travel on these streets is to change the timing of the lights to keep traffic at safer speeds. The timing of traffic lights on these streets could to be slowed to the posted speed limit. Email your councilmember – the affected wards would be Ward 6, Ward 9, and Ward 7 (for maybe a block).

When the time comes to re-stripe again, 3 years from now, when the majority of construction on 35W is over and there are once again a more-than-adequate number of lanes for car travel on the freeway, those of us who are still here have an opportunity to not just restore the safer lane setups, but to improve them: Our Streets has a blog post from 2012 about how we could improve the streets – and, we have 3 years to prepare for it. The commissioner for the majority of the affected area is Peter McLaughlin, and his opponents this year are Megan Kuhl-Stennes and Angela Conley. Contact them and ask them to support a safer Park and Portland in 2021, such as the one proposed in the above blog post. I also ask if this is something that Our Streets would like to push for once again – we have an opportunity to make something good happen at the other end of this car-tastrophe.

50 thoughts on “Park and Portland Restriping”