Here is Part 1 in the series.

We took the first Northstar headed out of town, at the crack of 11 am. We just barely made it to the platform in time: I had to rearrange some of my pack, and it took us a couple tries to find how to get down to the station from the street and not end up inside Target Field proper. Probably if we’d arrived a few minutes earlier, the staff would have pointed us to the ADA place to board our bikes, but as it was, the step down and gap between the platform and the train car was pretty strenuous to haul a fully loaded bike across.

We found one bike already buckled in. There’s officially room for 2 bikes per car, but the conductors let us buckle in one bike, and lock the second one to the first. Here, finally, I found a sign posted on the inside of the train saying that it wouldn’t run on Memorial Day. I had been half hoping that it might, as a backup plan, but no such luck.

I love trains, though. Shortly after departure, I noticed that I’d never seen the city from these angles before. There were some really great pieces of street art on the bridges over the rails, and some quality aesthetic choices made by the designers of the stations as we got further out. The tiny skyways to connect the two sides of the tracks are marvelous. It hurt to see the big new developments that had sprung up next to the train stations, though – these people could be commuting to jobs in the city, but I wouldn’t wish a 5-runs-a-weekday Northstar commute on anyone. The big empty parking lots didn’t help either. Still, there were train station reunions happening on the platforms at almost every stop, and you can’t help but have your heart warmed by people being welcomed back home.

We got off the train at Big Lake, and saw a handful of other cyclists disembarking the train there too. It seemed like quite a few people were taking the train out of the city to take a countryside ride that day! We sunscreened up, caught a quick coffee and a snack, and headed west, zigzagging across roads and taking some lanes when we needed to until we got out of Monticello. Motorists were generally pretty polite, which was unexpected but very welcome.

At first, the extra weight on the bike isn’t so bad! You don’t corner so good, but that’s to be expected. You get a little extra momentum once you build your speed, so it takes longer to slow down when you’re coasting. Plus, it’s new, so it’s automatically cool and exciting. Somewhere around the 8 mile mark, though, our loads, the slight-but-constant headwind, and the warm weather caught up with us. We found a nice flowering tree to lay down under, drank a lot of water, and pondered the economics of having exactly two cows, like the place in front of us apparently did. Resuming our journey, we made it the rest of the way mostly without incident, appreciating the birds and the landscapes.

We got to the ranger station at Lake Maria, and checked in. The ranger informed us that bikes were not allowed on the trails, so we would have to leave them up front. I panicked! This was not what we planned for! We were going to have to make multiple mile-long treks to get all our gear up to the site!! But, she got a couple of people in DNR green vests to talk to us. I convinced them that we wouldn’t be biking on the trail, just pushing our bikes, and they saw that our street tires wouldn’t harm the trails at all. Common sense ruled the day: we were allowed to walk our bikes with us up to the site. And it was beautiful. 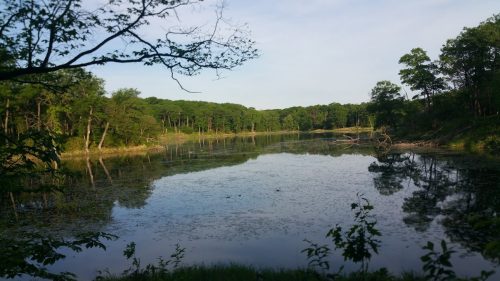 The view from our campsite.

We unpacked, and spent the rest of the day (and the next day) being extremely lazy, napping and reading. We saw Canada Geese, a beaver, lots of mosquitos and dragonfiles, and were serenaded to sleep by frogs. It was great. 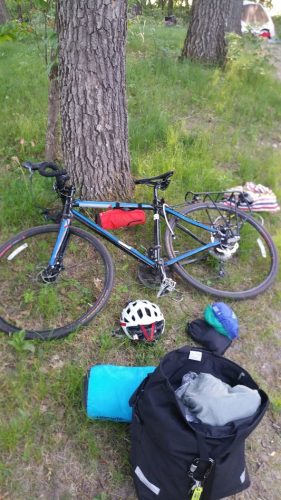 Next time: The trip home!

2 thoughts on “My First Bikepacking Trip! Part 2 of 3”