Naturally, the comments – both on Facebook and on the local news sites – are displeased. Accusations are being flung that this shows a lack of civic pride and patriotic spirit.

Now is the moment. The moment… for a civic mascot for St. Paul.

You may have recently seen the CityLab article on Japan’s wacky city mascots. Per that article:

Thousands of municipalities all over Japan have their own mascots, typically designed to reflect local produce, wildlife, or landmarks. In many cases, they create a bizarre hybrid of all three. Cartoon images of these characters enliven posters and street signs, while roly-poly costumed incarnations waddle around summer festivals or hand out prizes in schools. They promote tourism, generate revenue from memorabilia sales, and are a source of regional pride.

Several streets.mn contributors were recently discussing what mascot would apply for St. Paul. This was shortly before the #mprraccoon incident, with the daring trash panda making national news for her struggle to exist in an urban landscape not built to her needs.

But the raccoon is not a good mascot candidate, in and of herself. First, the City of Coon Rapids already has a raccoon costume that they make some poor jerk wear on the summer parade float, waving furrily in the hot sun alongside Miss Coon Rapids and other notables. (We bet it is a more enjoyable outfit to wear during the winter festival.) Second, the raccoon was relocated to Shakopee, which seems to counter St. Paul civic pride (“The most livable city in America!“).

But for livability, there is Pig’s Eye Parrant. As the first person of European descent to live within the borders of what would eventually become St. Paul, he had vision. He knew livability. And he found it, right along the river, where he trapped furry creatures and distilled his own liquor for sale and trade. He was an entrepreneur! The area was known by his nickname until 1841, when a Catholic priest showed up and gentrified the name.

So, thanks to Andy Singer, we have a proposed mascot of civic pride for St. Paul to soothe the wounds of a fireworks-less Fourth: 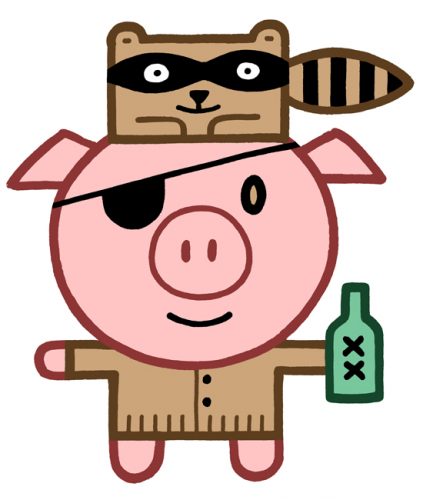 A drawing of a potential Japanese Anime style mascot for the city of Saint Paul that is a cute Pigs Eye with a live racoon hat and a bottle of booze, by Andy Singer

Note the homage to entrepreneurship! To the #mprraccoon! It would make a great parade float costume, and look great on a t-shirt, as a stuffed toy, as magnets and even painted on water towers!

However, we suspect that after a few dozen public hearings, much as Father Lucien Galtier thought naming a town after a bootlegger was maybe uncool, we bet the people of St. Paul would descend into madness, discussions of city-wide garbage collection, and possibly even questions about where Pig’s Eye would park. Eventually, a compromise civic mascot would emerge: 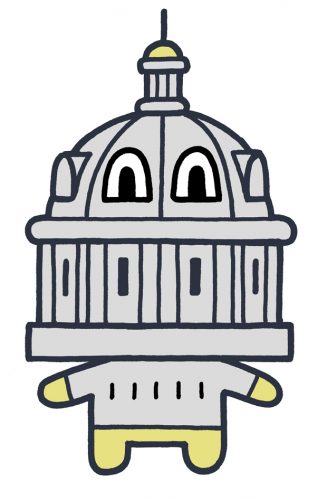 A drawing of a potential Japanese Anime style mascot for the city of Saint Paul that is a cute capitol building, by Andy Singer

Now, it’s not that we don’t love the Capitol – Cass Gilbert did excellent work on it! But, what would you rather see waving at you from a parade float? What would my kids rather get their picture taken with? And where’s the raccoon, anyway?

Happy July 4th, y’all. May your civic pride overflow, and may no one in your July 4 parade collapse wearing a fur suit.

8 thoughts on “On Civic Mascots, Civic Pride & the City of St. Paul”