Following my post on potential Twin Cities rapid transit routes, which you can find here, next is the topic of regional/commuter rail in the Twin Cities region. Minnesota has one example of regional rail; the Northstar Line between Minneapolis and Big Lake in the northwest region operating on existing BNSF Railway track.

How do two similar sized cities have such a huge difference in commuter rail ridership? The Frontrunner operates all day in both directions, and instead of terminating in the central business district trains continue through to other suburban areas. After the morning rush hour Northstar trains layover in Downtown Minneapolis until the evening rush hour, wasting a whole day when they could go back and forth between Big Lake and Minneapolis or continue west to Wayzata on BNSF Railway’s secondary mainline. The Northstar is nearly nine years old, and still hasn’t reached its intended destination of St. Cloud.

However, not only do you need more trains and routes to make regional rail successful. You also need stations in areas where people live and work, and you need good transit connections at these stations. In terms of serving existing developments the Northstar has mostly failed at this except in Minneapolis, Ramsey, and Anoka. Downtown Elk River is on the route, but Elk River Station is a few miles south, and Big Lake Station is a mile away from Downtown Big Lake. The planners seemed to prefer stations in undeveloped areas for large park & rides and the possibility for development rather than building stations where there is already development or to revitalize downtowns. Ramsey Station was built with that philosophy, and now has the COR (Center of Ramsey) developments walking distance to the station. Fridley Station is acceptable as there are people living around the station, and last year bus services were launched from Fridley Station to major employers in the area. It would be optimal to schedule some Route 10 buses to connect with Northstar trains, as University Avenue is a mile away from Fridley Station, which would allow a one transfer ride to Northtown Mall or other destinations along the University and Central Avenue corridors.

A regional rail station outside of Oslo in the northern suburban area of Kjelsås.

Above: A regional rail station outside of Oslo in the northern suburban area of Kjelsås. There are a few bus routes directly serving the station with frequency as high as every 10 minutes throughout the day. There are also diverse housing options very close to the station.

Regional rail can be successful in Minnesota, and despite the Northstar not reaching ridership projections it has done adequately with the bad hand it was dealt. To have a successful regional rail system, I looked to Oslo, Norway where I lived and studied for four months. The regional rail system is easy to understand with local trains typically operating shorter distances and serving more stations, while regional trains typically operate longer distances and serve fewer stations. Their regional rail system is complemented by numerous intercity routes going to Norwegian and Swedish cities. The schedules for the routes are easy to understand as its typically every half hour to an hour, but this depends on if its a local or regional service. Within Oslo the routes meet each other, so there is high frequency in central Oslo. If we want a successful regional and intercity rail system, then that is how we should implement it.

Above: Potential regional rail routes in the Twin Cities

Most routes use existing freight railroad right-of-way, but there are exceptions using abandoned railroad right-of-way or new right-of-way. New right-of-way includes along Interstate 494 and Highway 212 between Minnetonka and Eden Prairie to serve Southwest Station, along Highway 13 between Savage and Eagan to serve Burnsville Transit Station, along University Avenue in Fridley to serve Northtown Mall Transit Center, and along Highway 52 between Inver Grove Heights and Rochester in order to have a direct route to Rochester without acquiring properties.

These services are intended to be used for longer distance travel, whereas rapid transit routes that may follow close to regional rail routes are intended for shorter distance travel. For example a person who lives in Wayzata and works in Edina could travel by regional rail without having to transfer in Downtown Minneapolis, and it would be quicker and more reliable than current bus service. Another example is a person who lives in Northfield and works at Burnsville Center can take a regional train to Lakeville and transfer to the Orange Line or a local bus.

Frequency for each route could range from every 20 minutes to only 3 roundtrips per day. For example the Dakota Rail Corridor between Minneapolis and Hutchinson could have trains every 20 minutes as far west as St. Bonifacius, but only a single digit number of trains per day further west to Hutchinson.

There are of course numerous challenges facing such a system besides current unwillingness from the political and public realm to secure better funding for transit and reunite for regional interests instead of individual community interests. As we have seen with Southwest LRT and Bottineau LRT, BNSF Railway and Twin Cities & Western have been difficult to negotiate with on using their right-of-way and impacting their operations.

Unfortunately I doubt any railroad would help contribute funding for a regional rail route on their tracks (they can feel free to prove me wrong), even if there is a guarantee of upgraded track and signal infrastructure among other improvements such as grade crossing separation, grade crossing improvements, and more track capacity. However with that guarantee its optimal the freight railroads would approve, or at least have reasonable demands.

Another issue is train schedule coordination, in which freight railroads don’t have a set schedule like passenger rail does. Although Amtrak has priority, if the route has limited capacity and a freight train is coming on a single track line, then the Amtrak train has to move onto a siding. Planning each regional rail route has to take into account the daily operations of the freight railroad including what industries they serve, how many railcars are there typically on each train, what is the speed of each train, etc. With this information we can understand what track improvements must be made and how to coordinate schedules.

When the typical American thinks of passenger rail, they think of a diesel locomotive pulling coaches. However self-propelled railcars should be the main use on a Twin Cities regional rail system as they’re lighter, more efficient, quieter, and perfect for routes that don’t have the demand for a train pulling coaches that each can seat 100 passengers. Similar to our light rail trains, but larger, self-propelled railcars are common on European and Asian regional rail systems. The two common types are diesel multiple units (DMUs) and electric multiple units (EMUs). The Federal Railroad Administration has slowly begun to let self-propelled railcars on American rail lines with the implementation of Positive Train Control and relying on crash management systems in the event of a collision instead of building trains like tanks that are heavy and inefficient. With improved battery technology and alternative energy technology such as hydrogen power, using diesel rolling stock may not be needed to save on the cost of installing overhead wires. 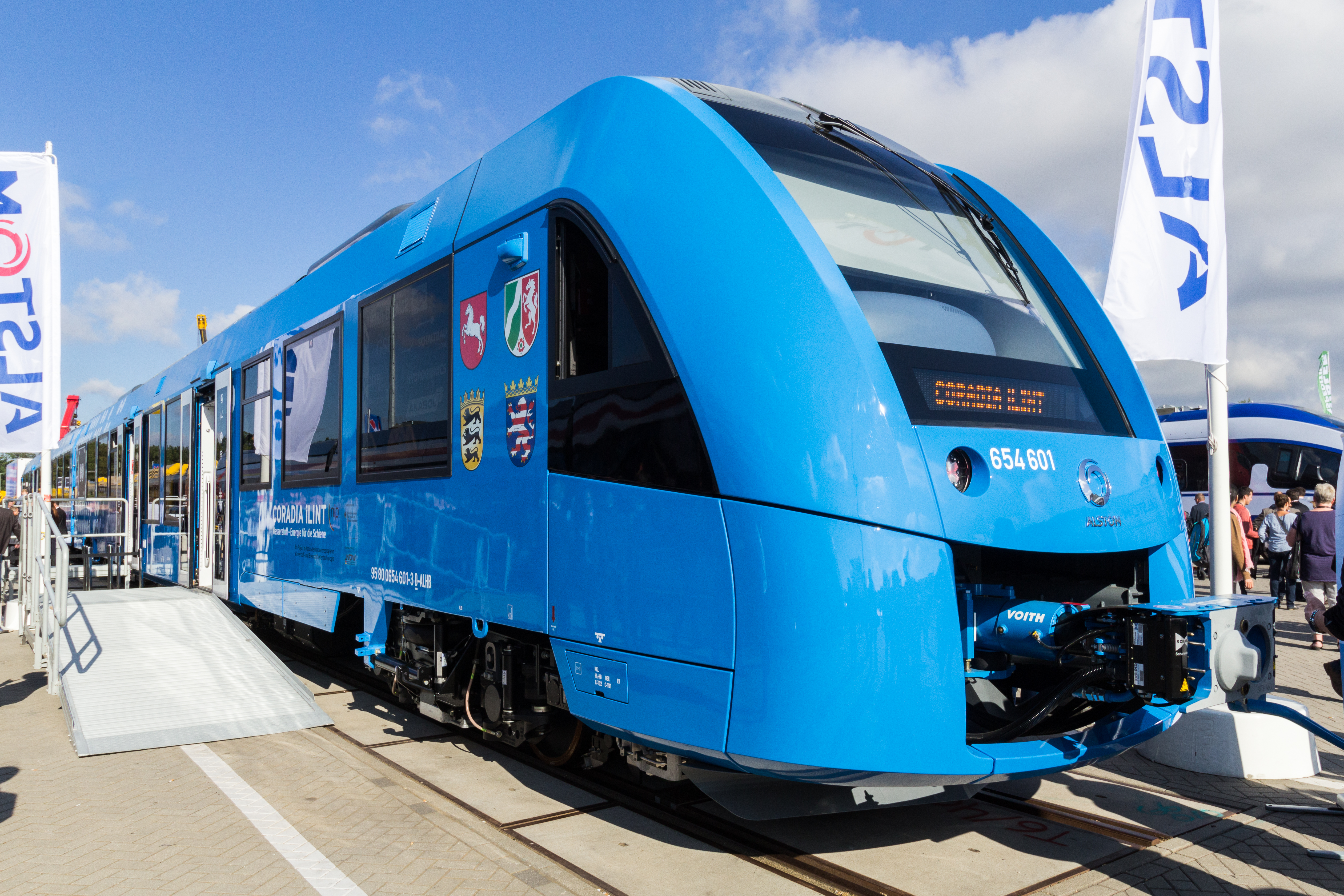 Above: The Alstom Coradia iLint, the first hydrogen powered train.

A Norwegian State Railway’s Stadler Flirt EMU in the small town of Movatn. The regional rail system in Oslo isn’t just for commuters, its also an important way of making nature outside the city accessible.

The Twin Cities regional rail system may look like it would encourage sprawl, but with or without it the Twin Cities will continue to sprawl unless policies are put into place to slow down or halt our continuing sprawl into third ring suburbs and exurbs. Part of the reason for a Twin Cities regional rail system is to keep development closer to downtown districts and transit stations instead of the status quo of developing as far as the eye can see.

While the idea of an extensive regional rail system in the Twin Cities may seem to radical to some, there are plenty of similar sized cities such as Oslo that have regional rail systems and are an important part of a multi-modal transportation system. Rapid transit routes, while also important, have little direct benefit to towns and rural areas. Regional rail can revitalize old downtown districts that were born due to access by rail, can encourage people living in areas dominated by the automobile to try transit, and can encourage the conservation of land in a region that is continually sprawling.

Last but not least will be potential intercity rail corridors in the Twin Cities and Minnesota, which I will cover in my next post.

86 thoughts on “A Regional Rail System for the Twin Cities”