High property wealth and homeownership is the connecting thread among those strongly opposed to the Minneapolis 2040 Comprehensive Plan.

The Strib recently reported on rumors that city planners will scale back on the nationally heralded plan to legalize fourplexes citywide. The new plan could instead allow for triplexes everywhere. This, among other compromises, shifts the plan to satisfy those with concerns about modest (prepare for scare quotes) “density” increases in their traditional single-family neighborhoods.

This is despite the significant public support for the plan. After the closing of the public comment period, director of long-range planning Heather Worthington was quoted in MPR: “For every person that has given us a comment that would be contrary to the current plan, we’ve received several that would be supportive or told us it doesn’t go far enough.”

Meanwhile, the opposition has referred to themselves as a “marginalized group,” while using the phrase: “nothing about us, without us”. They may be in the minority, but it’s a powerful and rich minority that has long had influence at City Hall. Their cries of a corrupted process results from recent elections that have put a more progressive faction in charge of the City Council. Their feelings of disempowerment are all relative; they remain some of the most privileged people in the city. As the map below shows, their position could be characterized as: “nothing for anyone else, without us”.

One highly visible aspect of this debate are the yard signs. You’ve seen them: the red yard signs with the apocalyptic messages, attacking the Minneapolis 2040 comprehensive plan. Even though a scaled-back second draft of the plan is about to be released, the anti crowd is still calling for the whole process to be shut down. But these yard signs provide a unique opportunity to analyze the characteristics of those most strongly opposed to the plan.

Who are the Minneapolis 2040 opponents? 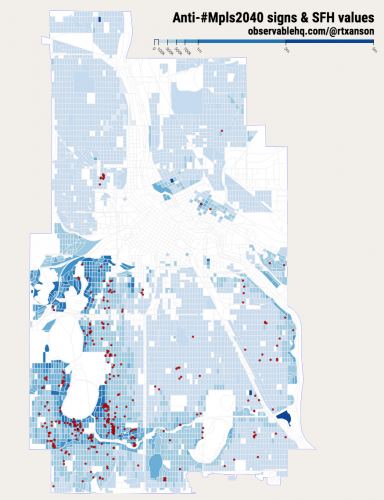 Over the course of the summer, I recruited a team of yard sign canvassers who have been noting the locations of anti-Minneapolis 2040 yard signs during their travels around the city. This includes some concerted attempts at finding signs in North and Northeast in order to eliminate any geographic bias. The address data was connected with Minneapolis property assessor data to provide a look at the type of properties that these signs represent. Of 330 signs, all but one was successfully connected with property records, the exception appears to be missing from the city assessor data.

In the map, the red dots represent the locations of “anti” yard signs. The shading of the city blocks represents the average value of single family homes on that block. Average values range from $0 to upwards of $5 million. A familiar correlation of wealth and politics arises from the combination of these datasets.

To view an interactive, zoomable map with some supporting tables, click here.

Some trends in the signed properties

To save you a pile of boring charts, here’s an overview of trends in the property records that these signs were connected with.

If yard signs are any indication, opposition to the plan is not representative of the whole city. The most signs appear in Southwest wards (wards 13, 10, 11, 12 together account for 83% of observed signs). These are the wealthiest parts of town. North Minneapolis, Northeast, and large chunks of Southwest are underrepresented in signs, and no doubt, underrepresented in the process as a whole. The only signs that could be found in North are in Old Highland, an area known for its preservation of historic homes built back in the very early days of Minneapolis. 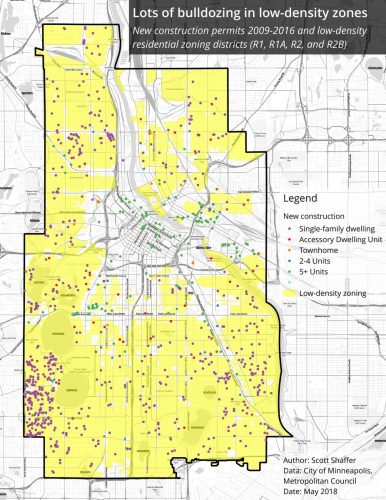 The average sign-holder enjoys the the best schools, the highest quality of living, cleanest air, abundant grocery stores, restaurants, jobs, and easy commutes to some of the biggest job centers in the state. They also enjoy greater participation in local political processes, having had very little chance at being disenfranchised from it, or disenfranchised from property ownership and the associated wealth. Their neighborhoods have not experienced bulldozing by eminent domain, and will not in the future — something that the yard signs warn us of. On the other hand, they do currently see a significant amount of bulldozing for new single-family mansion construction. They are overwhelmingly white (property records don’t tell us this, but neighborhood demographic data does). They are masters of process, as seen from the disproportionate number of successful appeals for property tax reductions in this part of Minneapolis.

While some sign-holders may certainly have worked hard to achieve property ownership, this is not an option for everyone, and over the past decades it has become exceedingly difficult within the cities. A plan to legalize fourplexes citywide represents a goal toward affordable renting in a city with rising rents, and improved access to ownership, in a city with strong disparities in homeownership. Who could honestly oppose goals like these, unless they are fine with the status quo?

The number one policy goal in the Minneapolis 2040 plan is reduced disparities. It’s important to consider the disparities in access to political participation. Even if the opposition is small, and constrained largely to a segment of well-to-do single family homeowners from Southwest, policymakers appear poised to give this wealthy minority more power in the process than is fair. Even if support for the plan overwhelmingly outnumbers opposition, there are still plenty of people not “in the room” on these decisions. Deciding in favor of a noisy subset of an already small subset of people in the room is not in line with the progressive goals of the plan.

Fill out the form with the street address, and attach a photo. I will periodically confirm and update the live map.

51 thoughts on “Minneapolis 2040 Opposition: A Look At The Signs”