This past weekend Star Tribune metro reporter Eric Roper wrote about the census tract that includes the Mall of America and Bloomington’s South Loop being classified as Opportunity Zones. He notes that in the 2017 tax code overhaul, Congress created Opportunity Zones to offer tax advantages for investments made in designated distressed areas.

The designations stay in place until December 31, 2028, according to this LISC FAQ. This is in addition to existing tax credits such as the Low-Income Housing Tax Credit and the New Markets Tax Credit, but LISC thinks the U.S. Treasury Department could change its guidelines about the compatibility between those tax credits and Opportunity Zone tax advantages.

Side note: Distressed communities made it into a Map Monday back in 2016 when the Economic Innovation Group published the Distressed Communities Index.

The state of Minnesota’s submitted list of distressed areas selected census tracts from all around the state. Minnesota’s Department of Employment and Economic Development (DEED) has a website that lists all census districts and includes an interactive map (which are enough to make me lose a hour or two). Here’s my screenshot of every census tract in the Twin Cities. 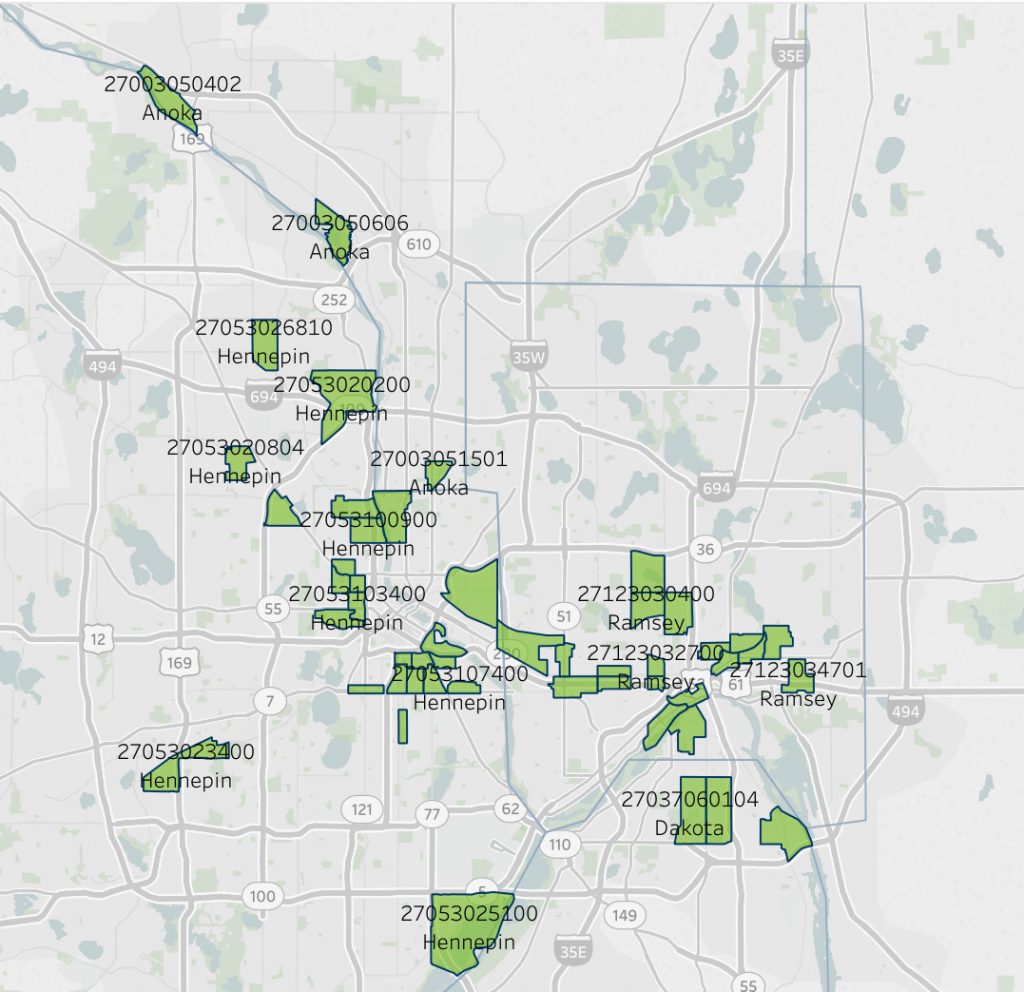 Technically, if we are expanding the Twin Cities beyond the standard Met Council seven counties to include the wider economic region, then River Falls, Wisconsin, has one Opportunity Zone, as do Red Wing, Cambridge and North Branch, Minnesota.

Seeing this map of designated “distressed” census districts brought to mind one of my recent Hennepin Minus Minneapolis posts. Three Rivers produced a map of Hennepin County (excluding Minneapolis) by income under $50,000 per acre. I immediately opened both maps side by side to compare how well the Hennepin suburban tracts fit. Compare for yourself!

As I compare the two maps, I think designating the Mall of America/South Loop is questionable compared with some nearby census districts in Richfield that weren’t selected. I wonder which criteria were balanced here. The other suburban Hennepin County tracts — especially the Crystal, Robbinsdale, Brooklyn Center and Brooklyn Park tracts — make a lot of sense.

I live in Hopkins. In fact, in checking this map I learned I live in an Opportunity Zone (27053023400 in the lower left of the map). Huh! I have many thoughts and questions about my Opportunity Zone and can’t resist jumping into the weeds:

Eric Roper notes in his story that the Brookings Institution rated Minnesota among the top states for selecting distressed areas (link is a .pdf). Congress’ program has been criticized as sometimes being used for redevelopment. From a broad overview, the Twin Cities selections are mostly a good fit, though I wish planners had used a more precise unit than census tracts.

Interested in exploring an interactive map of all the Opportunity Zones around the country? I found this map.

I’m intimately familiar with the Hopkins and Saint Louis Park context, but I’d like to hear from those of you who know more about other designated census tracts. I can imagine some of you have thoughts about South Wedge being an Opportunity Zone! What do you think?