January 2018 I tried a self-challenge: “January version of the 30 days of winter biking self-challenge.” It helped me get used to biking in the winter regularly and stop having fear of biking to/from the SE part of Saint Paul, where I live, to near downtown St Paul, where I work. It helped me beyond my expectations; it turned out it was exactly what I needed to do for my least favorite month during my least favorite season: get outside more.

Fast-forward a year later, I wanted to do the challenge again (now simplified to either 30 or 31 days of winter biking. But more publicly, get more people to do it with me. Amazingly, some people started to follow me on Twitter from Canada and kept up every single day, despite their weather being much, much snowier than in Minnesota. Also, they had no idea there’s an annual “April” version! I had to tell them the April one was the real one and I copied it for January just to help me get used to biking in the winter more.

I digress. I did end up biking all 31 days of January! I was acutely aware that it was unseasonably “nice” for the first 2/3 of January, which made me worried about what winter would be like when we finally had traditional winter weather. I can now say that I’ve biked in -35F wind chill (the next day was the record cold weather and I opted to carpool that day) and I’ve biked in a fast-accumulation snow storm. A 30-minute bike ride home from work took 100 minutes but I made it safe and only fell once when I was standing next to my bike, on a hill that was glare ice. We (my bike and I) tipped over.

My favorite part of the 2019 30/31 days of winter biking was to see how many other people were doing it, enjoying it, and sharing their adventures on social media and at my work. My co-worker Jen responded to a few questions I posed to her:

How did you make it through the end of January’s cold snap? For the days I rode in, I dressed in layers that I know work for me down to these temps (heavyweight thermals, fleeces of varying thickness, snowpants, softshell jacket, gloves, snowboots, face mask, goggles, and gloves). I conceded defeat on Wednesday (took the day off) and Thursday morning (took light rail in) because I stop biking when the air temp (not windchill) is below -20 F. At that temperature mechanical issues are inevitable and I’d rather not have to deal with them; mechanicals are even more of a hassle to deal with in the cold.

Did you have any problems with gear or clothing where you had to adjust a bit compared to other bike rides? For most winter biking excursions, I can get away with just my regular eyeglasses. However, when it’s that cold I have to wear googles. This presents a problem because they fog (and internet defogging tips don’t work for me) so I end up having to take them off so that I can see. I’m farsighted, so it kind of works and is better than the alternative of not seeing at all, but it is annoying to the point where I’m seriously considering getting prescription goggle inserts. Other clothing adjustments were just a matter of doing strategic layer swap-outs.

Did you see anything neat that you wouldn’t necessarily see on a bike? As I was walking to the light rail station on Thursday (day after the record cold snap), I couldn’t help but notice all the air crystals. It looked pretty neat and other-worldly seeing it in the air and on parked cars. I’m not so sure I would have had much opportunity to focus on it had I been riding-usually I’m more focused on what the traffic is doing and where I’m going (scanning for snow mounds to avoid and potential ice patches) than I am on natural phenomena.

Day 30 of the January winter biking challenge was – 25 F with strong winds, which made it feel much colder. I prepared by putting on several layers of winter gear and started my daily commute to work. After slogging through deep snow drifts on the Sam Morgan bike trail, I looked up and saw the branches of the trees completely whitened by frost, likely from the nearby steam plume. This particular journey was made more precious by the extremities of cold, creating a unique world that I’m grateful I got to experience. 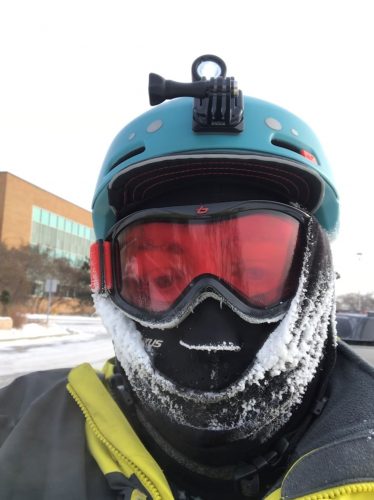 Jenny knows how to bike in the winter.Some of my favorite winter biking photos from January came from Michele at Nice Ride: 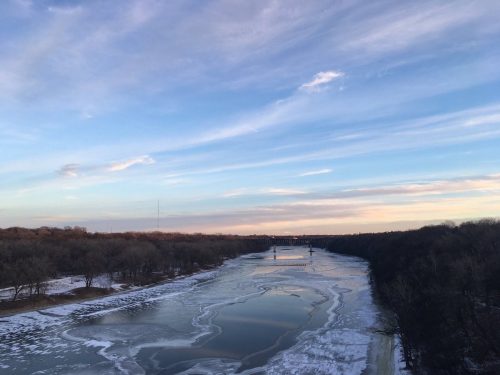 The best photos are captured by bike. 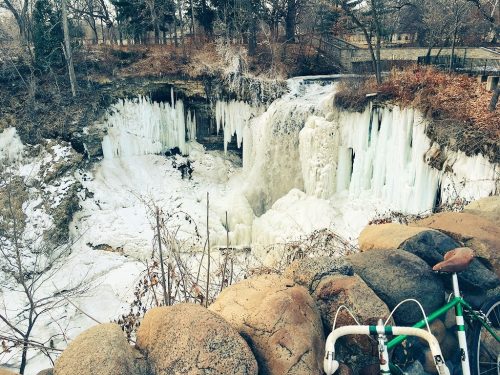 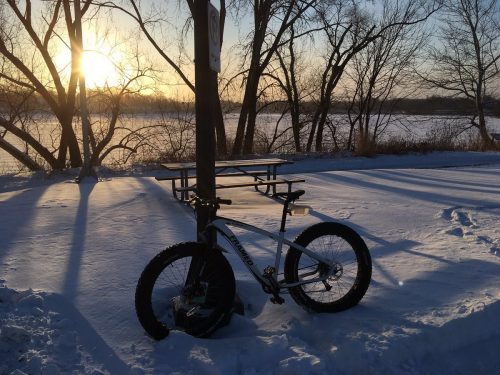 Might have set my personal best/worst #wintercycling temp this morning. Thanks to @SaintPaulParks for the clear paths around Como, and to @melissawenzelMN @eBikeSTP and all of you #everyday riders of bikes for inspiration #mysaintpaul #mnwx

Here are my own photos, one for every day of January: https://photos.app.goo.gl/skdQsnAGaRYCxMtf7

Since January ended with cold and snow, I’ve been taking it a easy and not pressuring myself to bike every day. But I can now bike in nearly every winter weather condition, and also know that I do have limits and it’s okay to NOT bike beyond my limits.

Side note: my Pedego electric assist bike performed phenomenally (or as we owners like to say “normal”) with the cold and snow. People sometimes don’t believe you can use an e-bike in the winter. Just clean it regularly and take the battery inside with you if your bike is parked outside.

Lastly, while I still don’t love winter, I am getting better about embracing the season and feeling more comfortable biking year-round. I still need to slow down, allow extra time for winter weather, but you know what? Auto drivers (should) do that too!