Background on the Issue with BNSF

BNSF could be opposing the Blue Line Extension simply to get more money from the Metropolitan Council to share their land, but there are two other possible reasons why BNSF is opposed to the Blue Line Extension. One is Hennepin County blocking a new railroad connection from being built in Crystal, and the other is safety concerns with light rail trains operating next to freight trains.

In regards to the latter reason, there are numerous light rail lines in the United States and Europe that operate on or along tracks used by freight trains. The BNSF tracks would be upgraded as part of the Blue Line Extension project, so as long as the rail infrastructure is well-maintained there should be little concern over a derailment. A crash-wall could also be built between the freight and light rail tracks, which is what BNSF demanded for the Green Line Extension just west of Downtown Minneapolis. Currently freight trains on this route, known as the Monticello Subdivision, operate at between 15 and 30 miles per hour. With upgraded rail the speed limit would likely be the same as the route is only used by a single local freight train per day. That freight train serves local industries between Brooklyn Park and Albertville, and on very rare occasions a train serves the Monticello Nuclear Plant. 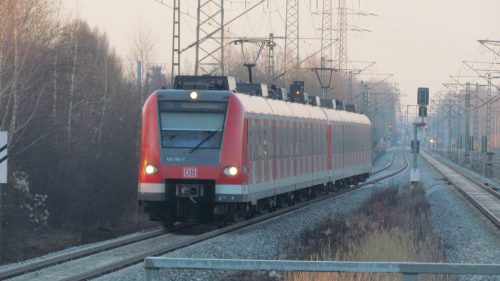 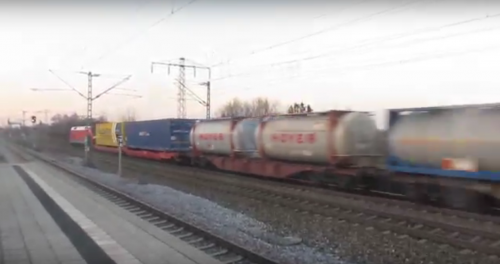 Above: One of numerous examples in Europe of lighter-weight passenger trains sharing tracks with freight trains is Munich’s S-Bahn. While the freight trains are lighter than American freight trains, a collision or derailment would still be a big and potentially deadly mess. 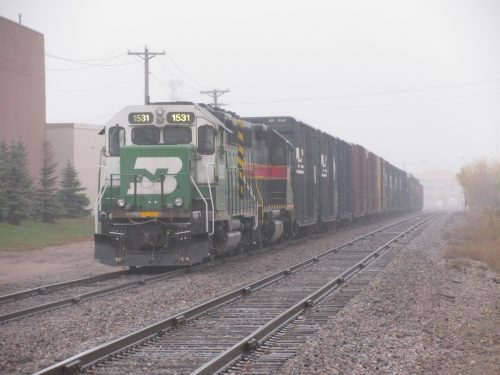 Above: The local freight train on the Monticello Subdivision near the Maple Grove/Osseo border.

With the above information in mind, it’s likely that BNSF’s reasoning is to get back at Hennepin County for blocking their Crystal Connection, but we don’t know for sure since they haven’t publicly stated so. In 2015 the Crystal Connection was planned connecting Canadian Pacific’s busy Paynesville Subdivision from the west to BNSF’s lightly used Monticello Subdivision to the south.

Two or three properties would have had to be acquired for the Crystal Connection. The purpose of the Crystal Connection was to relieve freight traffic in the busy Northtown Yard area in Northeast Minneapolis, and when it was proposed, oil traffic spiked. With the Crystal Connection, a certain number of Canadian Pacific freight trains would be detoured away from Northeast Minneapolis and would instead go through Robbinsdale, Golden Valley, and Downtown Minneapolis. This would likely include oil trains, and that’s part of the reason why Hennepin County snatched the land BNSF needed for the Crystal Connection. Another reason is Canadian Pacific’s freight trains can be a mile long, and would block several road crossings for an extended period. Grade-separation of crossings could be done, but it would be expensive and require multiple property acquisitions. After Hennepin County purchased the land, BNSF and Canadian Pacific instead expanded track capacity through Northeast Minneapolis. It was a victory for the county, Crystal, Golden Valley, Robbinsdale and Downtown Minneapolis, but this decision may have come back to haunt them.

In addition to Hennepin County buying the land where the Crystal Connection was proposed, the state imposed restrictions on the railroads’ eminent domain powers, specifically stating that the railroads cannot take land owned by Hennepin County. However since railroads are federally protected, it’s questionable if this state law would trump the railroads’ authority. BNSF and Canadian Pacific gave up on the Crystal Connection plans, so we don’t know for sure if they could’ve bypassed the state law.

As the fate of the Blue Line Extension is unknown, let’s look at potential alternatives.

The BRT option would replace the Blue Line Extension with BRT along a similar route. The service and infrastructure would be similar to the proposed Rush Line and Gold Line in the east metro in which most of the route has dedicated bus lanes and high frequency service all-day in both directions. The routing would be Olson Memorial Highway or Glenwood Avenue, Penn Avenue, West Broadway, Bottineau Boulevard, and West Broadway again to the Target North campus. This would be cheaper than the Blue Line Extension, and would be able to share ABRT stations with the C Line. However, it would likely not be as fast as the Blue Line Extension and would be more susceptible to traffic congestion and inclement weather. Ridership would be lower and it would be less likely to attract development.

This would be similar to the alignment of the already-built Blue Line along Hiawatha Avenue in South Minneapolis. Instead of operating along a freight railroad the Blue Line Extension would operate along Bottineau Boulevard between Robbinsdale and Brooklyn Park, and then the original planned alignment on West Broadway to the Target North campus. Between Downtown Minneapolis and Robbinsdale the Blue Line Extension would operate in a tunnel under North Minneapolis.

While significantly more expensive than the current proposed alignment, it would directly serve North Minneapolis, likely have higher ridership due in part to directly serving North Minneapolis, and avoid BNSF’s land. It would also lead the way in an eventual downtown LRT tunnel that will be needed if we want to add more light rail routes in downtown and/or increase frequency of the existing light rail routes.

This option would have arterial BRT (aBRT) or a streetcar line operating between Downtown Minneapolis and Downtown Robbinsdale via West Broadway. While cheaper than the Blue Line Extension, it would not reach as far north and would be of little benefit for Golden Valley, Crystal, and Brooklyn Park. However, whether or not the Blue Line Extension is built, aBRT or streetcar on West Broadway is still recommended. 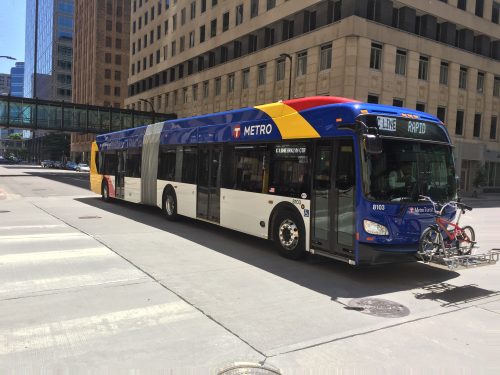 Regional Rail on the Monticello Subdivision

There are two possible routes for this service: entirely along the existing right-of-way, or one or two detours off the railroad right-of-way to directly serve major activity centers in Maple Grove. Rolling stock would be diesel multiple units (DMUs), bi-mode units (multiple units that can run on diesel and electric), or battery-electric multiple units (BEMUs). 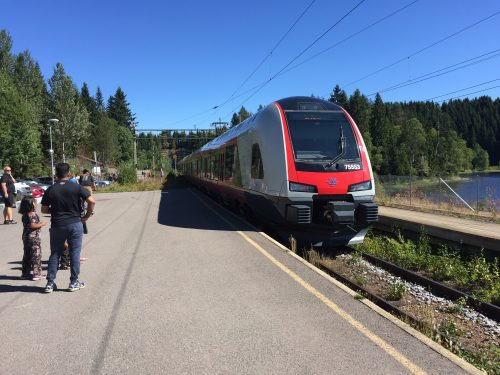 Above: An EMU regional train in Norway. With advances in battery technology electric trains could be used without needing to install expensive overhead wires on the entire route.

This would require increasing track capacity on the Monticello Subdivision, particularly on segments where BNSF serves shippers. It would also have to be approved by BNSF, and if BNSF wants the Crystal Connection the regional rail proposal would have the same luck as the current Blue Line Extension. Expanding track capacity for regional rail could also provide relief in freight traffic congestion if the Crystal Connection is built, but grade-separating all or most crossings in Crystal and Robbinsdale would likely be needed to reduce auto traffic congestion and allow emergency responders quicker and easier routes across the tracks.

Moving Forward by Going Back

If the Blue Line Extension is cancelled, my recommendation is aBRT on West Broadway to Robbinsdale, regional rail to Monticello, and bus service improvements in Brooklyn Park and Maple Grove that should eventually lead to BRT or LRT along the I-94 North Corridor. aBRT on West Broadway should move up higher on the priority list of aBRT projects, unless funding for the locally preferred alternative, streetcar service, can be achieved before funding for aBRT service. All of these routes would provide similar service and coverage as the Blue Line Extension except for North Hennepin Community College and Target North Campus in Brooklyn Park, but that issue is easily solvable with regular bus service improvements.

Unfortunately with our bureaucratic process, we can’t simply shift to a different mode and/or route on a dime. That needs to change. Environmental studies and community engagement are important, but it shouldn’t take years to do that. If the Blue Line Extension is cancelled that will be several years of planning wasted on top of the millions of dollars we’ve already spent on the project without moving a single piece of dirt.

aBRT or streetcar on West Broadway should be a simple planning process, as there only needs to be communication with stakeholders, determining an alignment in Downtown Minneapolis, and determining the best locations for stations. I-94 North BRT or LRT is more complicated, but we know for sure that the alignment should be on the west side of the freeway and preferably not in the trench, in order to improve accessibility despite the higher cost than running in the median. Regional rail from an infrastructure standpoint is simple; rebuild the entire route and build stations in town centers and activity centers. What isn’t so simple is what the railroad wants, and if BNSF wants the Crystal Connection that would complicate the process.

For any future transit projects in which land near or on railroad right-of-way will be used, it’s important that the impacted railroads are consulted in the beginning of the planning process in order to know if they will allow it, and what their concerns are. On a Federal level, there needs to be legislation requiring freight railroads to work with transit agencies on solutions to transit projects, instead of the status quo of simply saying “no” and allowing transit project to become stalled or killed.

18 thoughts on “The Blue Line Extension in Limbo”