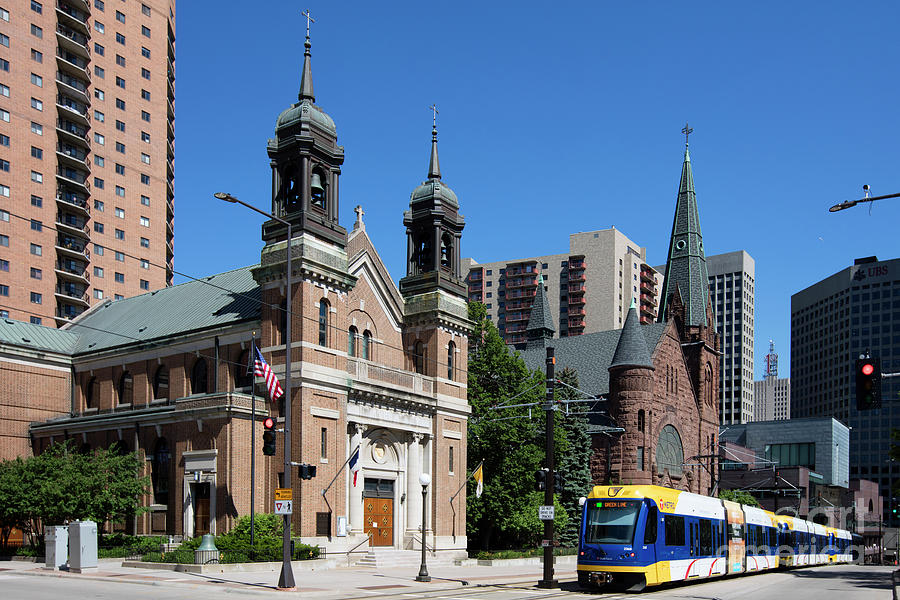 The Metro Green Line undoubtedly has been a boon for the cities of Minneapolis and St. Paul, catalyzing development throughout the Central Corridor. In a few places, however, implementation of the metro’s premier light rail route didn’t create the safe, pleasant multimodal environment that all users could enjoy.

In celebration of the Green Line’s fifth anniversary of operation, here are five ways the Central Corridor could be improved for cyclists, pedestrians and others not in cars.

#1 – Make walking more convenient. Everyone who uses the Central Corridor is a pedestrian at some point in their trip. In addition to enduring the noise and potential danger of motorized vehicles, pedestrians moving to or from the Green Line also have to spend a lot of time just waiting to walk. The signal timing is hardly pedestrian-friendly. Along University Avenue, waiting for pedestrian right-of-way at three intersections can add around four minutes to a 0.4-mile walk. (If this seems oddly specific, it’s because I’m speaking from personal experience rather than broader trends.)

Throughout the corridor, traffic lights are phased to maximize the smooth flow of cars, to the detriment of everyone who’s not in a car. It’s annoying enough to wait on a light to change when it’s sunny and 70; in inclement weather, that minute or two of waiting starts to feel a lot longer.

If the Central Corridor is going to act as a neighborhood hub rather than a divide, it needs to welcome people who aren’t in vehicles. One important step is speeding up the signal phases so people aren’t waiting more than 30 to 60 seconds to keep going where they want to go.

#2 – Make biking safer. A bicyclist seeking infrastructure to travel east or west across St. Paul (see screenshot above) can use one of the following:

Notably absent from this list is University Avenue. Though it’s home to an incredible variety of restaurants (my favorites being On’s Kitchen, Fasika and SugaRush Donuts), coffee shops, music venues, housing developments and more, the avenue has no obvious way to bike from, say, Workhorse Coffee near Raymond Avenue to Trieu Chau, a worth-the-trip Vietnamese restaurant conveniently located between the Dale Street and Western Avenue stations.

The counterargument to adding bike lanes next to places people want to go is often “but you have that [one bike lane/greenway/sharrow] four blocks away just for you!” This premise is flimsier than a bike tube that’s encountered one too many Twin Cities potholes. Everybody just wants to get where they’re going along the simplest path possible, and the intermittent hodgepodge of bike infrastructure traversing St. Paul is a far cry from a comprehensive, easy-to-use network.

Adding a (protected) bike lane with floating bus islands on University Avenue seems like an obvious way to fill in the gap of east-west bike infrastructure. If drivers complain about losing precious travel lanes, well, I-94 is built for them, and it’s only four blocks away.

#3 – Speed up the transit. The Metro Blue Line is fun to ride because it goes fast. Part of the reason for its speed is the environment in which the train operates, passing through largely industrial areas and having few signalized intersections to contend with, while the Green Line operates in a more densely populated area. The Blue Line also has transit signal preemption working in its favor, changing red lights to green or holding green lights when a train is on the way.

The Green Line has predictive priority, meaning traffic lights are alerted to the train’s schedule so that their phasing, in theory, can be adjusted to reduce the need for trains to stop. In practice, it feels as though the Green Line is beholden to the whim of traffic signal phases. (Though I have no data to back this claim, I often watch or wait as the train stops at a red light near Snelling Avenue, Lexington Parkway and many other streets throughout St. Paul.) I dream of a world in which the Green Line is given signal preemption throughout the corridor, and the downtown-to-downtown trip speeds up from a languorous 45 minutes to something closer to 30.

That also could smooth out the difficulties with transferring between the Green Line and the A Line, particularly during peak times, that are presumably the result of unpredictable traffic delays caused by the lack of signal priority.

#4 –  Calm down the traffic. Shorter signal phases, new bike lanes and the expected slowing of traffic caused by traffic signal priority would all serve to slow motorized traffic that currently flies down University Avenue unimpeded. Even so, room for improvement would remain.

Cars zipping by at 40 miles per hour when there’s no traffic (and sometimes when there is) create noise and an unpleasant environment for anyone who’s on foot, using a wheelchair or riding a bike. Adding treatments like colorful crosswalks, street trees and other plantings, and amenities like recycling receptacles would all help calm traffic. Slower traffic enhances safety for all road users and often helps smooth out traffic flow, thereby benefiting drivers as well.

Additionally, many intersections along University have absurdly large turn radii, like at Franklin Avenue (pictured above), allowing cars to make quick turns and reducing drivers’ ability to react to impediments to turning, such as people in the crosswalk. Implementing curb bumpouts and other intersection treatments would encourage cars to slow down before turning and reduce crossing time for pedestrians (also helping with suggestion No. 1!). #5 – Eliminate the traffic! This post focuses on my dreams for the Central Corridor, so why not go big? Close some blocks or segments of University to car traffic, allowing only pedestrians, bicyclists and transit users, similar to Nicollet Mall in downtown Minneapolis (pictured above) or the Washington Avenue transit mall on the University of Minnesota’s East Bank.

Businesses along the new transit mall could open patios where once there was space only for cars. A car-free environment would reduce noise and pollution, creating a healthier and more pleasant atmosphere for everyone in the corridor. Pedestrians could have a conversation without raising their voices above the din of traffic. Bicyclists could get across town in a straight line instead of an inefficient, inconvenient zigzag. Businesses could apply for grants to invest in facade repairs, patio tables, umbrellas, plantings and other improvements.

These changes could make the street come alive, creating a new University Avenue for everyone to enjoy. Of course, streetscape improvements aren’t the only thing needed for a thriving Central Corridor. What are your dreams for the area?