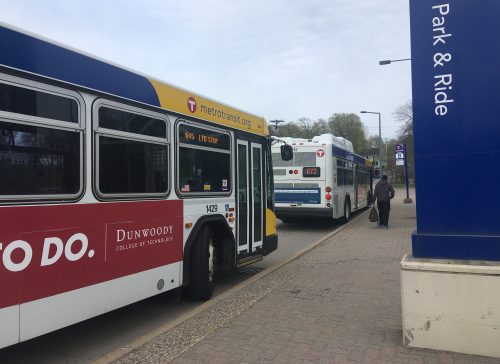 Metro Transit buses wait for passengers at the Wayzata Park and Ride on May 6, 2019.

Join the Events Committee for one final ride on the midnight bus from Wayzata on Friday, August 16!

Two years ago, as part of Metro Transit’s restructuring of transit service to better serve the West End, they introduced the 645 for workers along the 394 corridor. The 645, like the 675 it replaced, operates from Mound to Minneapolis with three major differences:

The three additional eastbound trips are:

One of these trips – the midnight bus from Wayzata – will be eliminated starting August 17. As of press time, Metro Transit didn’t respond to requests for comment as to why the trip was being eliminated, or even how the trip came about in the first place. However, their website mentions that it is being eliminated because of low ridership.

However, a source from inside the agency – who I will not name – mentioned that the Wayzata Chamber of Commerce reached out to Metro Transit to add a midnight trip so Wayzata workers could get home. And Metro Transit obliged.

According to the same source, the Wayzata Chamber of Commerce also originally requested a 2am trip. However, Metro Transit decided not to move forward with it because of the lack of transfer options in Downtown Minneapolis. The Chamber did not comment about the upcoming changes when I called them on Wednesday.

None of us – as far as I know – have been on the midnight bus, so we don’t know how it’s doing. Which is why we would like to invite you to ride it with us from Wayzata!

On August 16, we will meet at 7th & Nicollet at 9pm, by the northbound stop. We will then head over to Marquette & 7th to catch the last bus to Wayzata at 9:15pm. That bus will arrive at Wayzata shortly after 10pm, which gives us two hours to wander and get the last of the Happy Hour from Wayzata Bar & Grill.

Then, just before midnight, we will head over to the Wayzata Park & Ride, where we will board the final midnight bus. That bus will take us back to Downtown Minneapolis by around 12:50am, just in time to see the parade of overnight buses lining up at 7th & Nicollet.

If you come and wonder who to look for, look for myself in a transit-oriented t-shirt (or if it rains, donning a rain bucket hat) or Jeb in a purple polo.

Map of the route from Downtown Minneapolis to Wayzata on the 645. Source: Google Maps 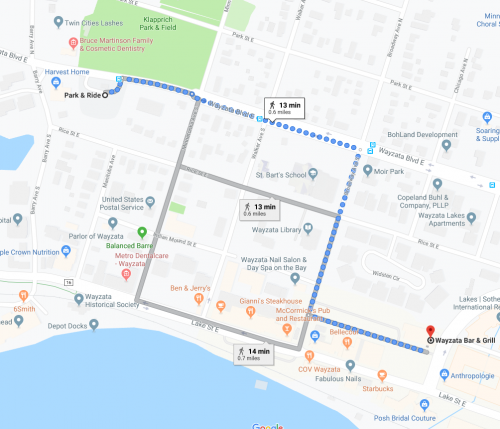 What Routes Operate After Midnight?

You may be concerned about being stranded when we get back. No worries; some routes will operate past midnight. All trips depart at 1:10am from 7th & Nicollet unless otherwise noted.

2 thoughts on “Friday, August 16th: Join Us For Happy Hour + One Final Ride On The Midnight Bus From Wayzata”