Another Kmart has closed. This one leaves behind an 11.5 acre site just outside downtown Rochester. The property was sold for $7M back in January, before Kmart had even closed. The parcel itself is weird, the current plan is disappointing, and the public process for such a large site in the supposed Destination Medical Center area has been…lacking.

At 6:00 PM on October 15th, people gathered at the offices of WSB & Associates on the far northwest side of Rochester. They were there to discuss the current (and only) proposal for the 11.5 acre lot in southeast Rochester, currently occupied by a vacant Kmart. The plan, as proposed at Tuesday’s meeting, is to tear the building down, and pave the whole thing. The massive parking lot will be leased to the Mayo Clinic to create a 1400-space park and ride that is free for employees. As far as I can tell, there is no other alternative being explored.

As someone who has planned and staffed plenty of public meetings in my career, I know there’s no great time to ask people to come to you (the answer, of course, is to go to them). Not only did the project team select dinner time on a week night, the meeting occurred at the exact same time as the Rochester ped/bike advisory committee meeting happening downtown. In addition, the project team ALSO managed to find a location that may have been the furthest possible location from the site while still being in Rochester. 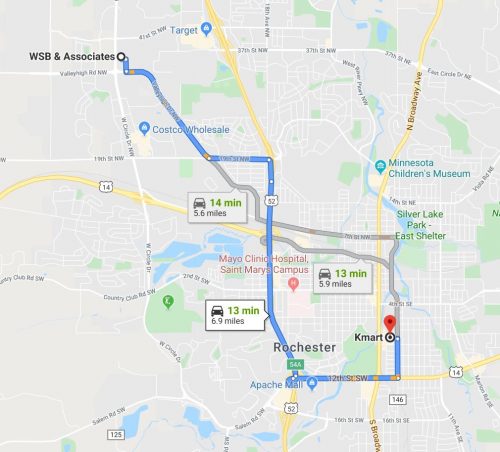 There isn’t a SINGLE meeting location a little closer to the site?

Rochester isn’t huge. But COME ON.

To make matters worse, the meeting was poorly publicized. City ordinance only requires the property owner to inform residents living within 350 feet of the site.  This Post-Bulletin article from less than 24-hours before the meeting seems to have been the only public notice beyond what was required. Unless you count this photo from Snappy Stop’s Instagram

Kmart is (was) in southeast Rochester, just a few blocks from the center of downtown.  The South Fork of the Zumbro River is both a feature and a barrier in Rochester. As are Broadway, and several active rail lines. And in the vicinity of Kmart, they all come together to create some interesting dynamics. So this isn’t a “rebuild the former grid” slam dunk like a lot of other urban big-box stores.

From my childhood memory, the stretch of Broadway between 6th Street SW and 9th Street SE is a vast expanse of nothingness that I witnessed primarily from the back of a school bus on my way to and from the Fridell Building. When I was in 9th grade, Rochester’s two high schools were so over crowded that the school district converted an office building into classrooms. For half the day, 9th graders from both high schools would come together for basic courses (Social Studies, Math, etc). The other half of the day would be at their home school. But, I digress. In reality, that stretch of Broadway is only 1600 feet long, parallels the South Fork of the Zumbro River and provides access to Soldier’s Field Park.

The site has a lot of potential, as do these couple of blocks of Broadway. It’s within the Destination Medical Center boundary, and is within the “Downtown Waterfront” subdistrict according to the property information available from Olmsted County. I haven’t kept up with DMC efforts, but that has to mean something, right? When Camegaran, LLC, a real estate company based in Hastings, bought the site, their representative was quoted as saying the property was “strategically located” and could be put to a “higher and better use.” 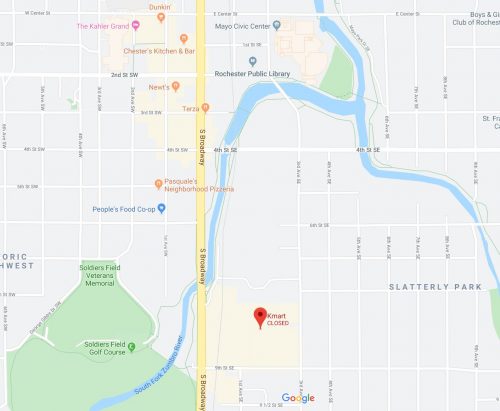 The Rochester Kmart site, in context

Usually, when there’s a super block with a big box store this close to a downtown, you can find the old parcels on historic maps, and/or there are roads that dead end into the site. Not the case here. Kmart is on Block 1, Lots 1 & 2 in the 1970 Bracken Mead Second Subdivision. Kmart was built in 1970, so before this, we can assume the space was probably farm land (that had most likely been stolen from it’s original Dakota occupants). 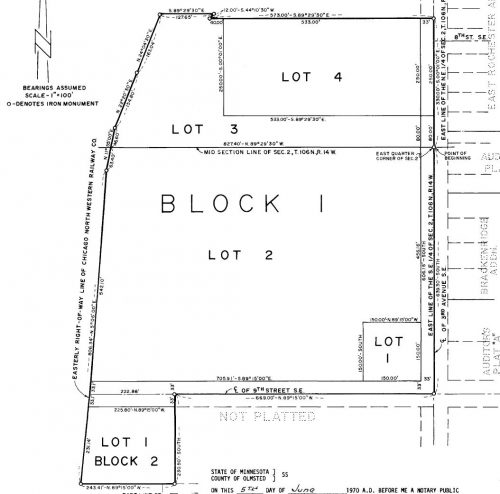 Lots 3 and 4 of this block have since been broken up in different ways, and the area between the Kmart lot and 4th Street SE is primarily either Associated Milk Producers or parking for Mayo Clinic staff – that might matter later. The west side of Block 1, Lot 2 was chopped off at some point, to create a long, weird sliver along the rail line. There’s also an uninspired strip mall between the rail line and Broadway. These definitely matter, because although the site is “along Broadway” the only viable access is really from 9th Street SE or 3rd Ave SE. To be frank, I’m surprised Kmart lasted as long as it did – you can hardly see it from Broadway. 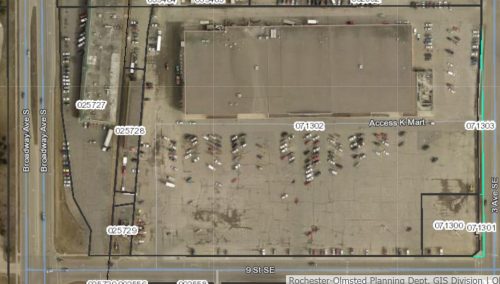 The long sliver created for Snappy Stop and Pawn America is honestly kind of impressive.

After hearing about Tuesday’s meeting, and feeling nostalgic for my previous job that occasionally included sketching up ideas for how to add permeability, walkability, and human scale retail to abandoned big box sites just like this one, I sat down to draw some stuff up for this very post. It’s usually drawing a couple of lines to punch through a couple of abandoned through streets, picking A streets and B streets, and adding a bunch of parking internal to the blocks (or maybe a well screened parking ramp?). The hardest part is usually convincing communities to take big risks and put back what was there. And, since this is just for fun, I don’t even have to do the second part!

But, uh, this one’s tough. So, to be continued…

5 thoughts on “Another Kmart, Another Controversy – Part 1”