Adjoining areas are similar, but each view is unique—even viewing the same site from a different angle. In broad terms, this fourth visit to Lynnhurst was similar to the first, which I described as “Some parkland, a school, a church, a restaurant, and a whole bunch of single-family homes.” (Indeed, the second and third days were also close to that model.) Yet the details matter, as do the vantage points. For example, at the start of this final walk I saw different aspects of the Mount Olivet campus than I had on the first walk.

The main loop of my route, shown in blue on the map, started and ended at the intersection of 50th Street West and Logan Avenue South, the point marked as A and B. (The red lines indicate forward-and-back spurs off the main loop.) Walking initially east on 50th Street, the church’s main parking lot was on the south side of the street, but on the north was something far more interesting: a well-preserved example of a 1950s rambler-style duplex, now used for Mount Olivet’s Counseling Service. 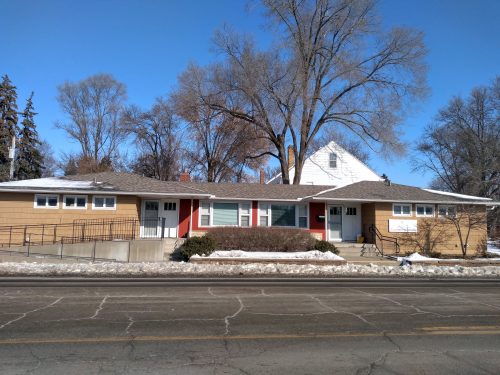 Nearing the corner with James Avenue, I passed between the two gothic church buildings I had seen on my first walk, the older and smaller 1700 Chapel on the north and the newer and larger main building on the south. This time, though, I turned south on James Avenue, which allowed me to see the southern wing of the main building. It blends with the gothic portion by being faced with similar stone, but it is set apart by the boxy shapes of the modernist international style. Indeed, as I moved from seeing the eastern side of the building to catching sight of the southern side, the contrast between the two variants of modernism made me recognize another tie-in with the gothic: the tall, thin windows set into grouped concrete slits in the upper level of the main eastern facade. 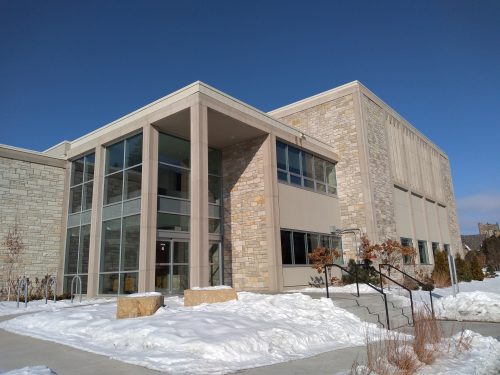 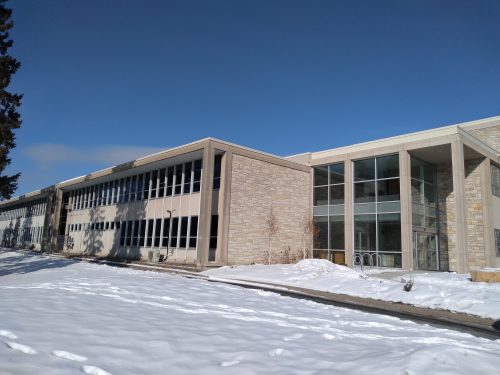 South of the church, James Avenue crosses over Minnehaha Creek. The view from the bridge revealed not only a strip of parkland hugging the frozen creek, but also the lovely railing of the bridge itself. The pattern of arches is more complex than would be apparent at a rapid glance, and the surface oxidation fits the color scheme of a winter day. 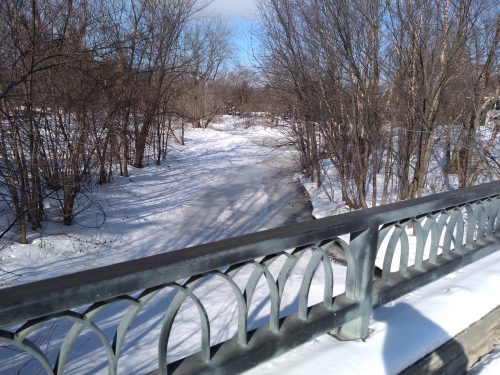 South of the creek, I looped through a residential area similar to what I had seen on other days. At any rate, the houses were similar. However, the combination of the weather and the residents’ creativity had produced some other, more ephemeral structures that were specific to this walk: first a snow person on Knox Avenue, then a much larger and more sophisticated assemblage of ice and snow where my 51st Street spur crossed over James Avenue. 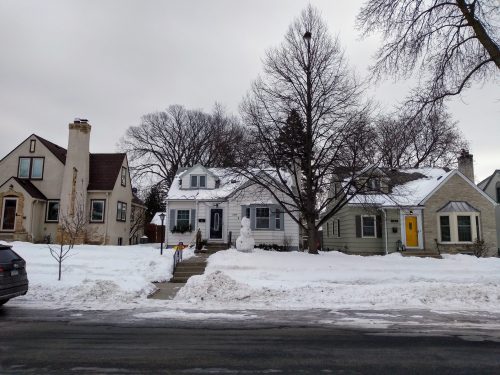 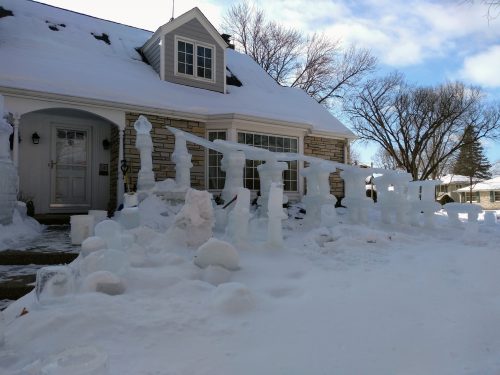 After the eastward spur on 51st Street, I turned west toward what is essentially a single point where 51st Street, Logan Avenue, and Minnehaha Creek converge. In order to accommodate this unusual coincidence, 51st Street has a dead end for motor vehicles on each side of Logan, with a footpath continuing the rest of the way to the avenue. The footpath on the east connects just south of the Logan Avenue bridge over the creek, whereas the one on the west connects just to the north of the bridge. Thus, I walked that bridge twice, each time northward: once while proceeding west on 51st Street and again at the end of the walk while proceeding north on Logan Avenue.

Beyond allowing everything to connect up, this unusual pair of footpaths provided some interesting views. In particular, the one to the west of Logan Avenue provided a good vantage point from which to see the striking patio door on the south side of the house located there—a house with a Logan Avenue address, but no direct access from the avenue. 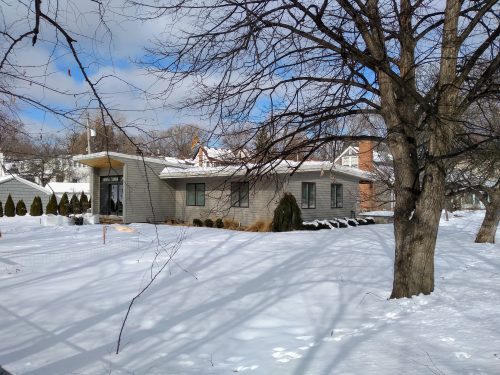 I continued west on 51st Street past my eventual turning point at Morgan Avenue into a three-block spur extending all the way to the neighborhood boundary at Penn Avenue. Already as I neared Morgan I could see the most striking aspect of this area rising to the west: a perfect sledding hill extending down from Newton Avenue to the creek. My route provided repeated opportunities to see this hill both before and after lunch, and each time there were groups enjoying it. (Indeed, it took some doing to take this photo at a time when none were visible: I try hard to protect the privacy of children.) 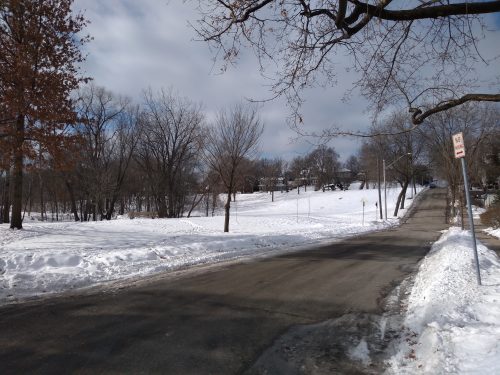 The same spur that provided this view of a large-scale feature also provided a view of a much smaller feature—not a hillside topped with houses, not even a single house, but a single column supporting the porch on a house. Seeing how the bricks had been laid in a helical arrangement is the sort of detail that makes me glad for a pedestrian’s pace. 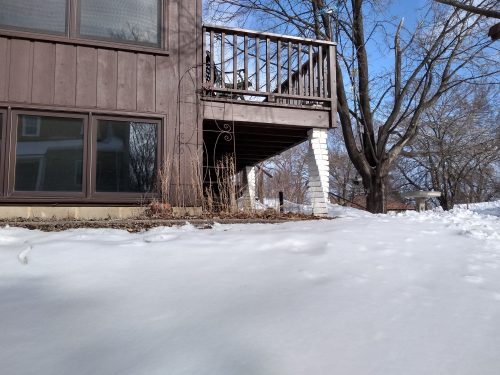 As I wound my way through the area north of the creek from Morgan Avenue to Penn, each house provided its own opportunities for appreciation. For example, as I headed south on Newton Avenue, a house just south of 50th Street stood out for its trim colors. A considerably more recent house across the tee intersection with 52nd Street is notable for its integration with the site, preserving large trees and the drainage pattern with an entry bridge. (This a tee intersection only for pedestrians; the block to the east of Newton is a footpath crossing the creek on a footbridge. I walked it as one of my spurs.) 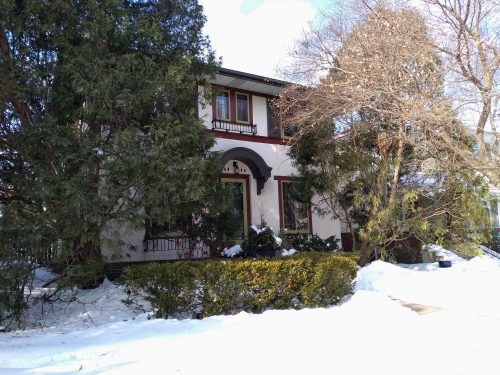 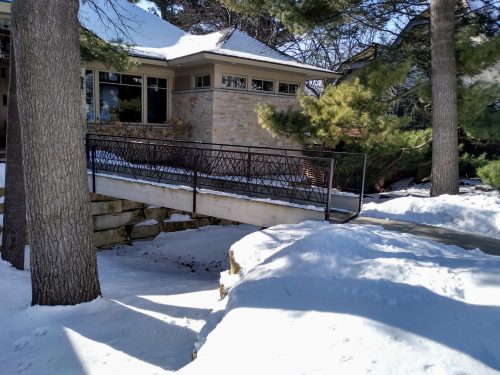 At the corner of 50th Street West and Penn Avenue South, a two-story building from the 1920s has three ground-floor businesses arrayed along 50th Street: Terzo, Paperback Exchange, and Sparrow Cafe. I’ve enjoyed many a meal at Terzo, but on this occasion it was out of the running due to the time of day and of year. (In warmer months, they serve lunch from their porchetteria window.) So instead, I had a Thai chicken sandwich at Sparrow Cafe, bright with the flavor of lemon oil. The word “bright” could also be applied to the cafe interior, which is surrounded by windows on two sides. That interior is dominated by an amazing mural by Broken Crow. I couldn’t photograph it without disturbing the other customers, but there is a detail on the cafe’s Facebook page and more photos by James Sanna on Patch. 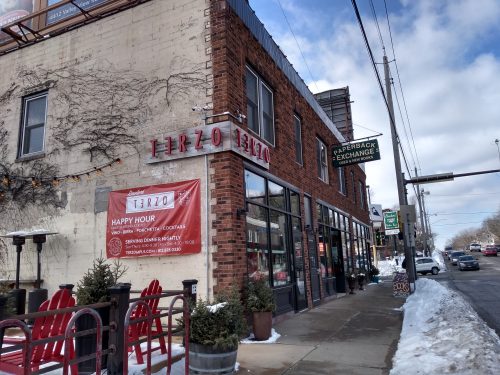 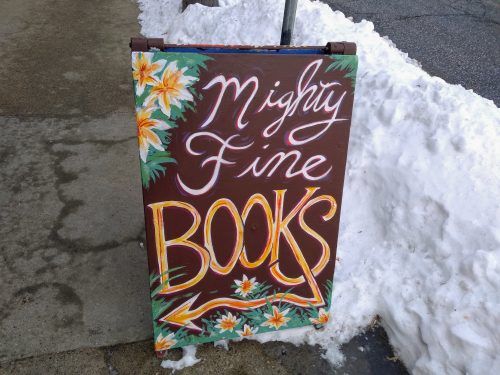 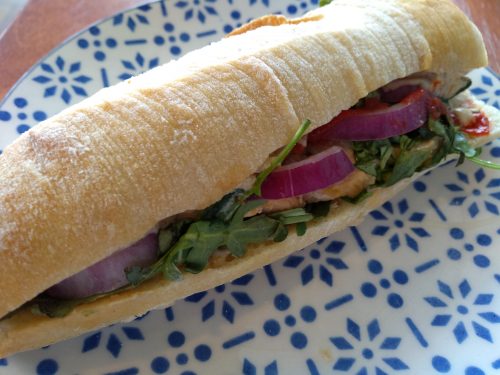 After lunch, I turned south on Penn Avenue. The retail node continues for a fraction of a block with Theisen Renovations (behind Sparrow Cafe in the same building), Lake Harriet Pizza, Lake Harriet Florist, and a Scuba Center (sharing a single-story building from 1950). After that, the avenue is lined with a mixture of duplexes and single-family houses until the next retail node, which is at the neighborhood’s southern border, 54th Street.

Out of those four blocks of houses, the standout is easily the one owned by the artist Mari Newman, who has made it her largest canvas. The front facade, shown in the first photo, features a bold stripe of color across the main-level fascia with smaller-scale designs filling in the porch windows, the door, and the siding under the windows. On the sides of the house, the stripe motif is extended beneath the fascia with the first three siding boards in pure black, then one in pure white, before giving way in the bottom five to the same multi-colored design as is visible under the porch windows. Finally, I caught sight of the garage, which combines the two styles. Each siding board has its own intense background color, but with a design in a contrasting color superimposed on it. 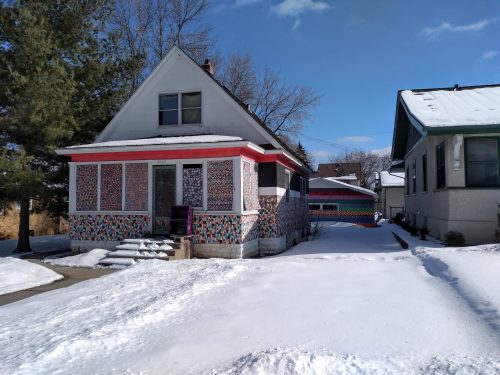 I am grateful for Mari Newman’s gracious permission to publish these photos of her work. When I spoke with her, she initially laughed off my request– her whole reason for creating art was to get it out into the world. I’ve heard that from other artists as well, but that doesn’t negate their right to retain some control.

Further south, I got another wintery view of the creekside parkland, and then at the southwest corner of the neighborhood, saw how a children’s publisher had updated a 1953 building. The solar panels just visible at the left of the photo don’t simply extend upward from the roof—they are cantilevered out from its edge, providing shade over a driveway electric-vehicle charging station. 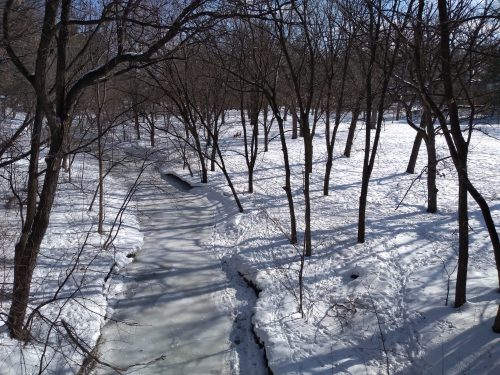 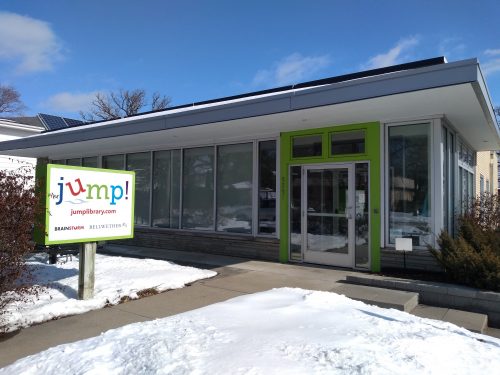 Before returning to my starting point, I needed to loop through the area south of the creek, aside from James and Knox Avenues (and the associated portions of 51st and 54th Streets), which I had covered at the start of the walk. The following four photos are from this portion of the route. The snow fort shown in the second photo has a clever engineering detail not visible from this angle: the roof is reinforced with a plastic sled. Aside from that, I’ll let the photos speak for themselves. 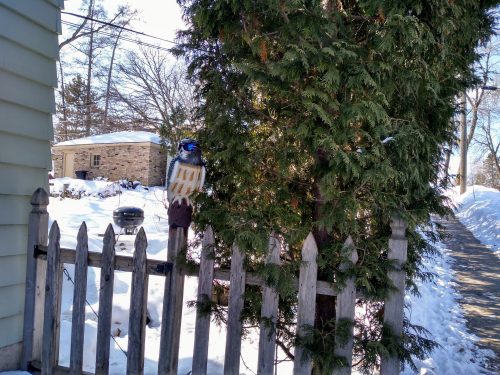 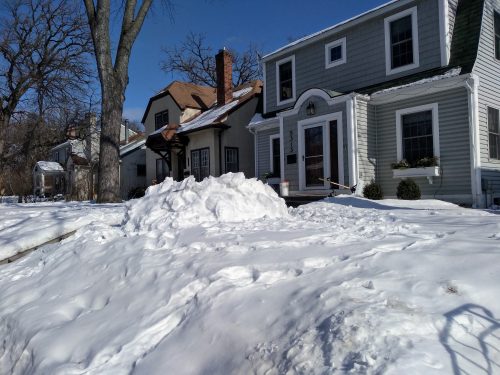 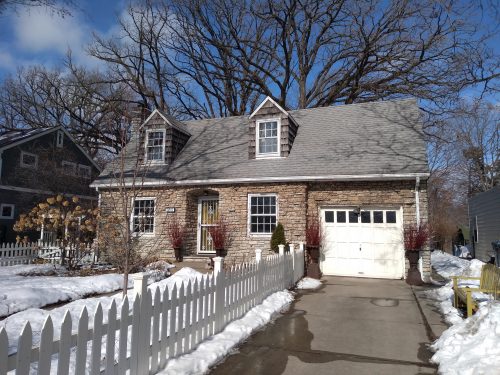 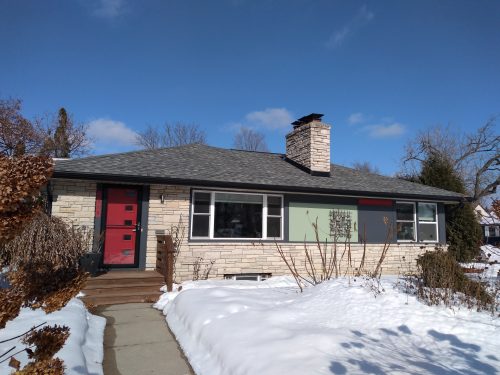 Editor’s Note: Max Hailperin is walking each of Minneapolis’ 87 neighborhoods, in alphabetical order. He chronicles his adventures at allofminneapolis.com, where the original version of this article was published March 7, 2020. We’re sharing them here at streets.mn.