My question is: if a city has a plowing policy for paths, but not a “bare path” policy, is it worth it to plow the path at all?

I live in Fridley, and 2013-2014 is the first winter where the city has decided to plow the paths. Previously they would just plow what few sidewalks the city has. Neither the path or the sidewalk plowing are bare path, so I look at them both through the same lens.

I tried riding these partially plowed paths on a bike with studded tires. When the snow has not yet been compacted to ice (the bone-shaking Walker refers to), it is quite a bit like sand. Riding on sand is difficult. I’m not an accomplished cyclist, but I managed to make my way to the barber shop and back. I had to walk my bike up a slight incline once I lost my momentum. Starting to pedal on the slope was nearly impossible since all I did was spin the wheel, kick up snow, and dig myself further in.

Bare path plowing isn’t just for bikes. Being sure-footed goes a long way to avoid fatigue. In Fridley, most of the people I see walking walk in the street. Mississippi St. is Fridley’s main street and one of the few city streets with sidewalks. There the letter carrier prefers to walk in the road, which is a harrowing 4-lane, no-shoulder affair. He walks up every meticulously maintained suburban driveway to deliver mail to the door – there are no mailboxes on Mississippi St. He just prefers to avoid the city maintained/neglected sidewalk.

By maintaining a “bare pavement” street plowing policy while neglecting paths and sidewalks, the city is sending a clear message to pedestrians: don’t walk. Walking in the street sends that message right back to the city: If you’re not going to fully plow the area where I’d like to walk, I’ll walk where it is fully plowed. 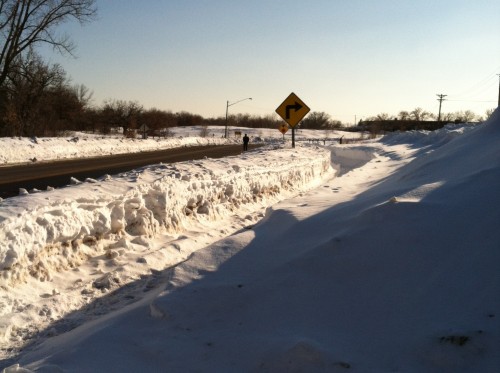 I prefer the Minneapolis approach where the residential property owner is responsible for clearing the sidewalk. Residents get it. If you want your sidewalk to be usable, you have to clear the snow as close as you can to the surface. Then when the sun comes out, it can reach the surface to slightly warm it and melt what’s left.

So is the question really: is it better to have a half-hearted plowing policy or instead enlist the city’s most prevalent resource, its citizens, to help out?

Which is more effective, having the plowing crew of two dozen workers clearing the sidewalks or having thousands of residents pitching in? Like Chuck Marohn says, the top-down approach is orderly but dumb, employing citizens may be chaotic, but it is smart. 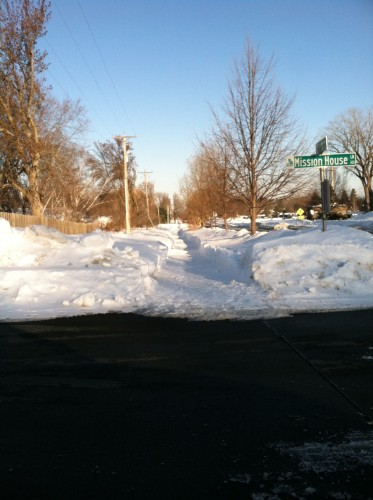 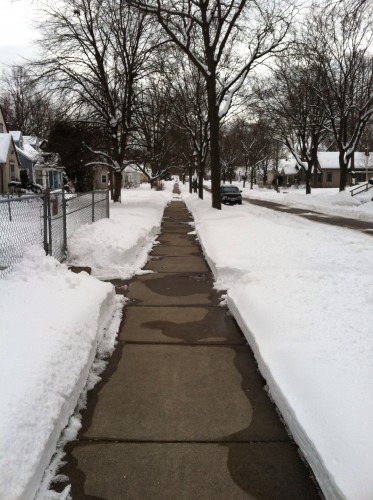