I’ve spent a bit of time in the St Anthony area recently, looking for homes and reminiscing about my runs along the river during college, attending the midnight opener for Snakes on a Plane at St Anthony Main, and memories of the church my wife and I were married in.  The area is quite beautiful, with some great date spots, places to grab a bite, or simply some utilitarian walking.  The commercial areas are starting to see some major investments in addition to the great concentration of existing retail, restaurants, townhomes, condos, and century-old residential to the east and west.  This development is even more impressive when you consider we’ve made no major transit investments recently (though the Nicollet-Central streetcar certainly won’t hurt).

However, it’s painfully clear poor street design hinders the area from becoming a truly welcoming environment to pedestrians, and one that fosters non-auto modes of transportation.  First, Hennepin, and Central Avenues stick out in particular, with University and Fourth not too far behind (but less terrible).  Let’s talk about how short-term changes can really make the public realm in this neighborhood worthy of the infill with street-fronting retail and transit improvements coming online. 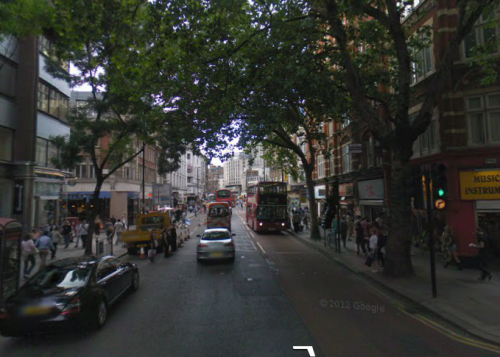 First, I’ll be referencing traffic counts from the Minneapolis Transportation Data site.  I’m going off the assumption that a 2-way street with up to 20k AADT can be 4-3’d without major issues, and therefore one ways with 10-15k AADT could be handled with 2 lanes (since there are no conflicts when making left turns).  I like to use personal experiences in great urban environments as gut checks to what can work here under ideal political and financial circumstances.  I was lucky enough to spend some vacation time on Charing Cross Rd in London last spring, and noticed how easily the street made do with two (quite narrow – 9 feet!) one-way lanes.  I checked traffic counts through Transport For London‘s site and found this exact point handles between 7,000 and 10,800 cars per day since 2003 (though counts have declined as London has emphasized bicycling and other modes in the last decade).  Keep these numbers is mind as we talk changes closer to home.

First Ave
First Avenue NE sees roughly 10,000 vehicles a day on its one-way path between 4th & 5th Streets, with the numbers bumping up a bit while crossing the river.  The rightmost lane alternates between on-street parking and right-turn lanes through the area.  I’ll be nice and simply say the combination of freeway spec lane design coupled with the lack of pretty much any sidewalk greening make First a hot & sunny (summer) / windy & desolate (winter), dangerous area for those on bike or foot. 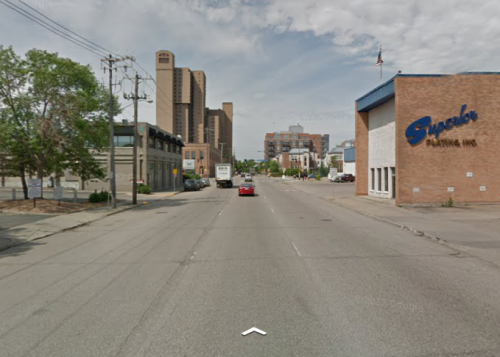 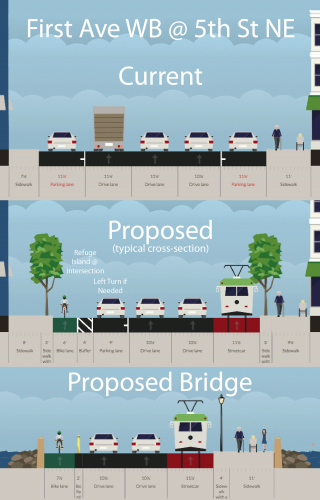 Three lanes seems excessive given current/future land uses and one-way daily traffic counts that have only surpassed 10,000 twice in the 8 times it’s been measured since 1999.  Add in the fact that sidewalks run between 8 and 11 feet wide, less than any individual travel lane, and you really have to question Minneapolis’ resolve to be a pedestrian-friendly place.  Take a look at the image on the right for what I propose, assuming the streetcar runs along 1st in the future (in the meantime bus routes 4 and 61 can use the dedicated space to build area ridership through slightly enhanced service).  The loss of parking on one side of the street is an obvious tradeoff, but I believe bike parking and Nice Ride stations paired with quality area bike facilities plus enhanced mobility via eventual streetcar service makes parking on both sides unnecessary in this district. I also included a proposal for how bikes, peds, streetcars, and vehicles cross the bridge, which can be mirrored for…

Hennepin Avenue
Between University & 4th Street, Hennepin Ave sees around 13-14k AADT; again, numbers vary between river and crossing Central, but they hover in this range. Hennepin is far better than First in how it treats pedestrians, limiting on-street parking on both sides with curb bumpouts that widen sidewalks, add trees for shade, and provide bike parking.  That said, sidewalks are still just 11′ wide and lack continuous tree cover in lieu of a third traffic lane. 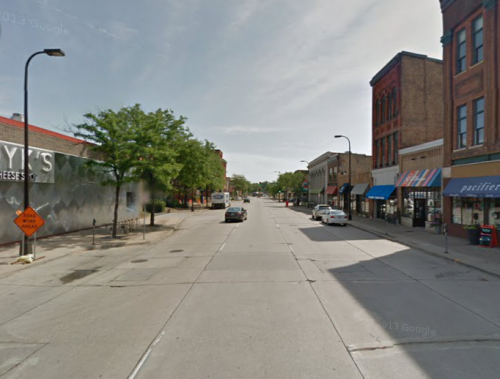 Much better, though still not perfect (image source: Google Maps) 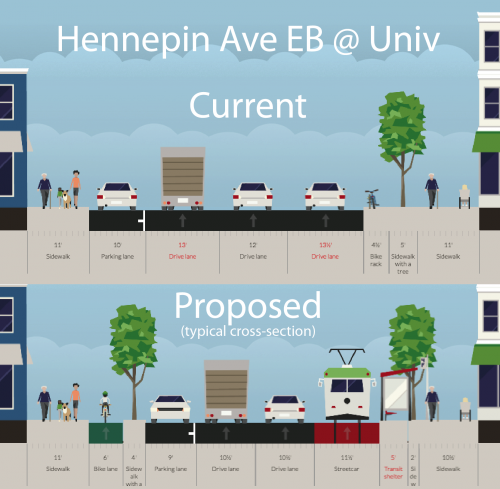 I propose using the forthcoming streetcar project, which will already inflict a little area pain, to make some changes in this strip (the area north/east of 7th St where Hennepin reverts to two-way will require some different tactics).   Re-do the east-ish curbside when rolling the streetcar through, removing parking and widening the sidewalk with newly planted trees.  The west-ish side can wait for change if utilities and storm sewers aren’t conveniently placed, but this is an excellent opportunity to complete the one-way cycle track pair (1st Ave being the other) by changing the  current bumpouts/parking to a raised cycle track.  The existing left travel lane becomes street parking, with a re-painting narrowing the rest of the thru-lanes (I’m not aware the last time Hennepin was reconstructed, but it seems to be in decent enough condition). 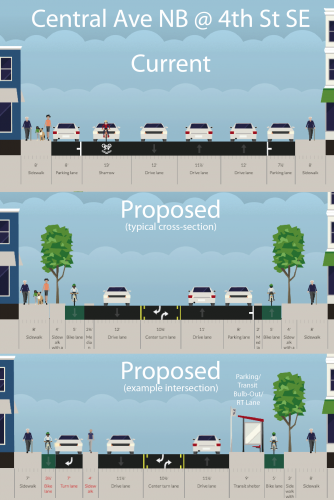 Between 4th & 5th Streets, Central sees ~14,500 two-way AADT, with numbers again varying between the river and further north, but all below 20k.  Central is definitely the least bad of the three, and looks to have been recently resurfaced, but the sidewalk is definitely cramped in many spots – quite the recurring theme.  It’d be great to leave room for a bus lane for a future Central Ave “E Line,” (assuming Chicago-Fremont and Lake St come first, but I think Central would best serve the area transportation needs via a 4-3 conversion with a raised cycle track on each side.  Minneapolis believes Central is a critical piece of the cycling infrastructure (so do I), so let’s do it right and skip the sh(itty)arrows.

Parking only on one side, not shown in lieu of bulb-out transit stop here. The 12′ travel lanes may seem blasphemous, but they include necessary gutter pans.  The right of way is just wide enough for a 12′ pedestrian zone adjacent to (but separated by trees) a passable cycle track.  This track can pass behind transit stops, and on the east side of the street be completely separated from right turning traffic.  Unfortunately, the west side cycle track would  share the right turn lane with vehicles – far from ideal, but better than sharrows for the whole corridor in my opinion.  Further north where traffic is lighter and right turns less frequent, right turn lanes can be eschewed in favor of protected intersection designs.

Alright!  Like the idea(s)? Hate em? Ideas for handling changes as you move away from the St Anthony Main core?  Let’s move the conversation forward and get the city/county on board with making this area safer and more valuable at the speed development will likely occur over the next few years.