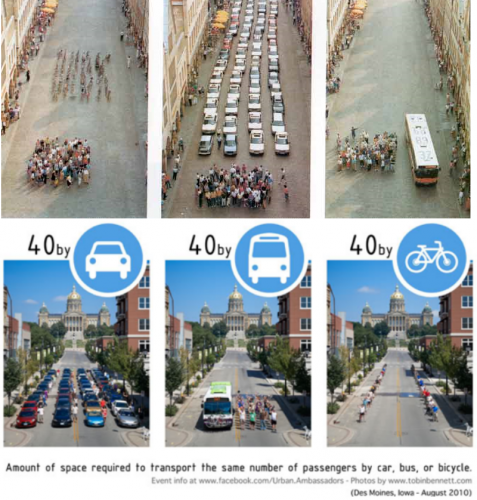 We’ve all probably seen some images floating around on Twitter or other blogs showing the public space various modes take to transport people. This is a powerful, visual way to highlight the inefficiencies of how we’ve laid out our streets and roads, but we still seem to lack the political will to make major changes in space allotment as we invest in transit projects or street redesigns.  As a comment points out in Nick’s recent post, Minneapolis (and other urban municipalities) completely miss opportunities to follow through on their stated goals to implement bicycle facilities.  To my knowledge, none of the arterial bus lines proposed by Metro Transit will utilize dedicated lanes, either. 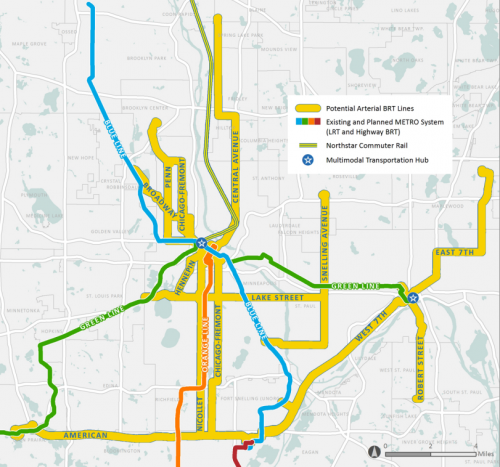 A good start, but nary a dedicated lane in sight.

Further, the graphic itself leaves open room for plenty of (somewhat legitimate) criticism, ranging from the fact that cars can indeed carry more than one occupant, to the fact that buses aren’t running continuously but rather every 7.5 to 30 minutes (depending on the route and time of day).  We need a slightly more detailed argument in our arsenal to make our public spaces both more efficient (moving people, cost to maintain, increased property values etc), and more pleasant to live, work, or play near.

The Technical Side: Efficiency

How many people can a lane move in a day or hour?  This is the primary question traffic engineers have tried to solve, and they’ve done so under the lens of moving personal vehicles rather than people, oftentimes sacrificing scarce space for even more lanes.  But how efficient is a lane designed for cars?  In theory, a group of semi-autonomous vehicles with moderate communication between each other (brake signals, a car’s body language, speed, etc) can flow through a lane at roughly 2,500 vehicles per lane per hour. 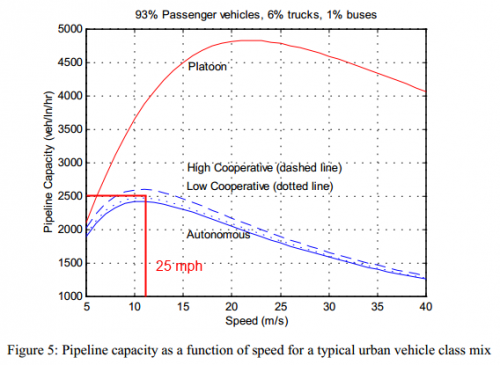 Of course, this assumes freeway lane sizes without the interruptions you’d typically see on an urban street – traffic signals, pedestrians crossing, side friction from parking cars and merging buses, accidents, etc.  It’s easier to simply evaluate what our city and county engineers have been able to accomplish from a lane capacity standpoint.  Below is a compilation of four of the busiest arterials in Minneapolis (each having at least 2 lanes in each direction), showing AM and PM peak hour traffic counts. 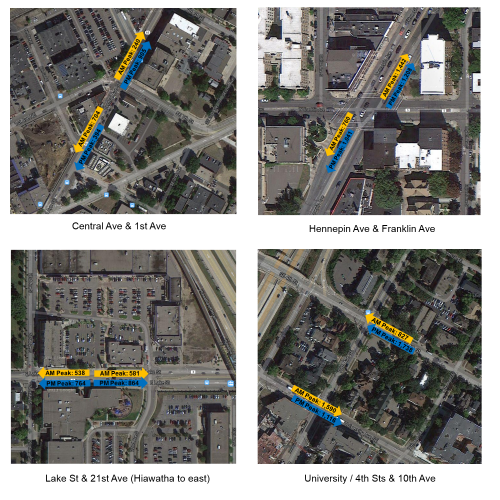 Consider this: with all our left and right turn lanes, timed signals, peak hour turn restrictions, and the rest of the ways we’ve engineered our streets as pipelines, these four streets average out to a maximum hourly throughput of 543 cars per lane, per hour.

Of course, we know that cars can carry multiple people, but during rush hours in America, the average occupancy of every car is just 1.13 people.  This isn’t a knock on drivers.  Carpooling is inconvenient at best- most commuters don’t live near co-workers, and may have personal obligations they’d like to take care of before or after work.  In any case, this means our average urban lane in Minneapolis probably carries at most 613 people per hour.

Let’s compare that to what I would call a world-class surface running transit system.  Imagine for a second we had the political will to convert a lane in each direction on every major arterial, be they parking or thru-lanes, to transit only.  Also imagine we had the (relatively marginal) capital to build the type of stations that allowed speedy boarding and comfortable waiting spaces (they’re already planning on this part anyway).  An articulated bus can seat 59 with room for 64 standing travelers.  At 90% and 50% capacity (for a net 70% bus capacity – quite comfortable and a reasonable for peak hours), respectively, these buses can move 85 people at a time.  If we were serious about transit, we’d run these every 5-6 minutes in peak hours and 10 minutes off-peak, giving us a peak hourly lane capacity of 850 to 1,020 people.  Of course, there’s a cost-benefit analysis methodology out there for considering BRT lane conversions – has it been used here in the Twin Cities?  How does the city regularly evaluate its space allocation for moving people around between bus, bike, rail, and car?

Before we start arguing if this would work from an origin-destination basis, consider that 42% of people who live in Minneapolis also work within the city limits, according to the US Census Bureau’s “On The Map” tool.  Despite that number, only 24% of Minneapolis residents biked, walked, or took transit to work from 2006 to 2010, to say nothing of those living in neighboring cities commuting in, or Minneapolis residents making short auto commutes out.  Convincing that sizable gap to make mode changes requires major system investments, but the other major draw will come from…

Allowing more people to live and more companies to locate in core cities requires the kind of place-making that draws people and families of all ages.  If we could replace 540 cars with a single bus every five minutes, how much quieter would our major streets be?  How much safer would families feel if auto traffic moved by at 15-20 mph rather than 25-35 mph because lanes had narrowed to 9.5 feet?  Would concerns of air pollution vanish?  Would people be willing to make the trade-off between personal and public space if our great parks were supplemented with the type of public living rooms we’d get as a result? 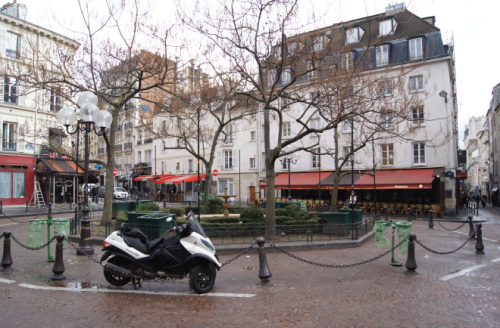 A cost-benefit analysis will never answer these questions.  Even the most hardened libertarian urbanist sees the value in creating welcoming, safe places – whether these are simply wider and well-designed sidewalks, parklets taking over on-street parking spaces, or new plazas that might result from reducing auto capacity in favor of other modes.  But this is what it takes to make living and working in a city more appealing (and worth the trade-off of space and privacy).  Let’s push our city leaders to take a more proactive role in redefining every foot of every major street under a different set of goals and objectives.