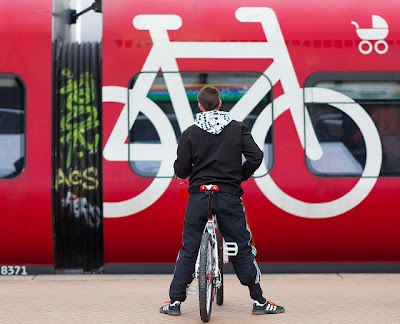 Children and bikes welcome on the train in Copenhagen

In a recent blog post, MPR’s Hart Van Denburg shared a video showing a Green Line route in it’s entirety. He also felt the need to mention the time it has been taking in test runs to ride the route from end to end. There is no need to speculate as to whether he personally was being antagonistic in mentioning this, the duration of the route has drawn the ire of demurrers on various comment threads.

Even were we to grant these trial times as the norm (even though they have already improved) the way the issue of run-times itself is framed evinces a crude and naive understanding of what the Green Line is and how it will be used. The Green Line is not a commuter line connecting the downtowns of our Twin Cities; a kind of slow, pathetic substitution for I-94. It is rather a metropolitan rail that runs through not a few dense parts of both cities which enables travel to many and various destinations all along the length of the line.

The University of Minnesota student who catches the LRT downtown to hit up a show at First Avenue will not ask herself how long it takes to get from Union Station to Target Field before hopping on. She will be glad of the convenience of not having to park; she will be pleased not to pester her inner judge as to whether she can drive home safely with one more beer; she will not have to rouse herself from conversation to feed a meter. Likewise the Northeast native will not bemoan the pace of the Green Line as he hops aboard for outrageously good soup at Ngon; for these are the common, everyday, pedestrian reasons that people will take the Green Line.

Because it is in a city. It is not running from a small town – misnomered for its small lake – to a baseball diamond, achingly slow and with too few trips to be of any use to anyone.

The suburbanite will continue to rail against anything that doesn’t look like a parking lot stretched thin. They wish to spend their whole life in them. Meanwhile I will grab the Green Line for punk rock shows at the Turf Club without a care or a thought to speeding travel between its extreme ends. If I do start to thinking about transit as I pull up to the Snelling station, I will probably only hope we build more and more of this kind of urbanized transportation.

61 thoughts on “The Green Line Is Not Commuter Rail”