“So what’s going on with that train stuff?”

Without Even Mentioning Light Rail

The contentious portion of our story begins in the 1990s, when the intersection of Hiawatha Avenue and Lake Street was reconstructed. What’s now the Midtown Greenway was previously an active freight rail corridor, with trains crossing Hiawatha Avenue at grade. Twin Cities & Western Railroad (TCW) was and is currently the primary user of the route, carrying agricultural and other products from western Minnesota to points east. Prior to the reconstruction, a decision was made to cut the freight rail crossing due to the high levels of car traffic on Hiawatha Avenue and the tricky geometry required to either elevate the tracks over or tunnel them under the roadway (page 3).

The freight rail route was moved to the Kenilworth Corridor, an area that’s been used a rail corridor and railyard with varying degrees of intensity since the 1870s. The Kenilworth Corridor splits off of the Midtown Greenway northwest of Lake Calhoun and sneaks between Cedar Lake and Lake of the Isles before breaking into an open area under the bluffs of the Kenwood neighborhood. The trains continue towards Downtown Minneapolis and cross the Mississippi River before swinging south towards St. Paul. A popular bike trail parallels the freight tracks throughout the corridor. 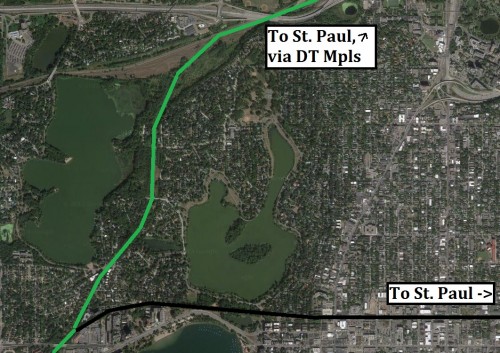 At the time of the freight rail reroute, the intention was to use the Kenilworth Corridor temporarily (one to six years) while a permanent route around Minneapolis was worked out through St. Louis Park. There was a Superfund site in St. Louis Park, the Golden Auto Site, that needed to be cleaned up right around the same time. There was, maybe, an agreement between St. Louis Park and Hennepin County that the county would assist with remediation at the Golden Auto Site in exchange for taking the freight rail. However, it would appear that no one got the final agreement in writing, which, in retrospect, is hilarious.

And the Light Rail?

Light rail has been proposed in the Kenilworth Corridor for literally decades. A vintage 1987 Star Tribune article about Kenilworth contains the phrase “…light-rail transit that could run between downtown and the western suburbs in a few years,” and other highlights. The planning process continued through the 1980s, 1990s, and 2000s. In the mid-aughts, the Minnesota Legislature overrode Tim Pawlenty’s veto and passed a bill allowing the seven county metropolitan area to tax itself to fund transit projects, and things got a little more serious. With the relatively easy to build (almost all the right of way was already acquired) Blue Line out of the way, and the obvious Green Line connecting Downtown Minneapolis and Downtown St. Paul in the bag, less speculative planning for the Southwest Corridor got underway.

A required alternatives analysis (AA) compared two routes (and others) for a southwesterly-oriented light rail route from Downtown Minneapolis to Eden Prairie. The AA is extremely hard to locate on any local government’s website, though approximately half an hour of searching did find it here.

Much has been written about the AA process on streets.mn and elsewhere. The cliff notes version is that one route (“3A”) followed the Kenilworth Corridor out of the west side of Downtown Minneapolis along existing Hennepin County Regional Railroad Authority (HCRRA) land to meet up with more HCRRA land in St. Louis Park, and took that out towards Eden Prairie. The other route (“3C”) had a couple variants, but essentially followed Nicollet Mall through Downtown Minneapolis, proceeded down Nicollet Avenue in a tunnel through South Minneapolis, to meet up with HCRRA land in the Midtown Greenway, and then head west out of the city. 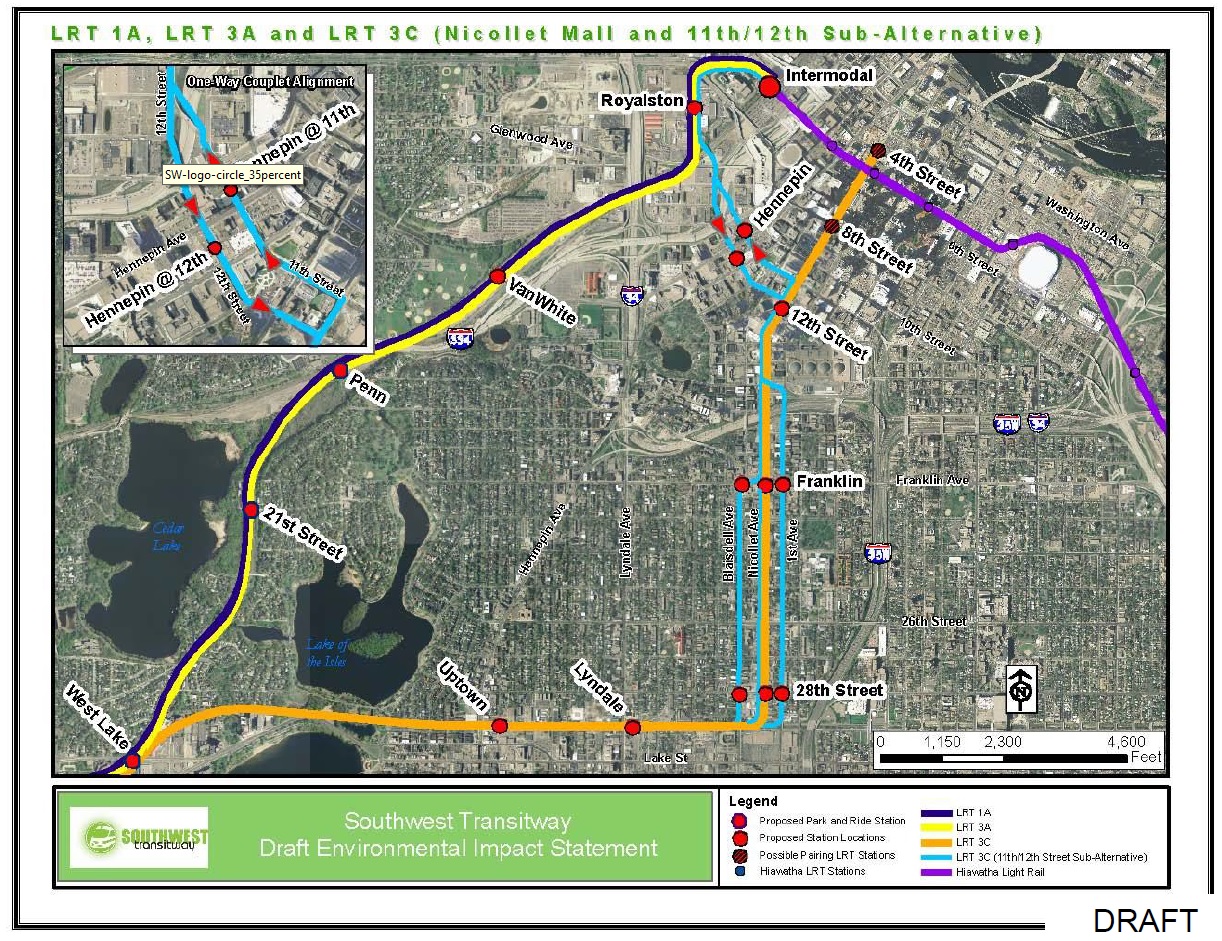 There are lots of numbers on the links above, but basically, 3A was projected to cost somewhat less than 3C and have somewhat higher ridership. Among other things, the AA included a station along 3A, here, in Kenwood, with 1,000 (!) projected daily boardings in 2030 (page 32) and a station along 3C at the Uptown Transit Station with about 1,600 (!?) projected daily boardings in 2030 (page 27). It also projected that the 3C Beltline Station in St. Louis Park would have several times more walk up riders than the Uptown Station (page 27). An observer prone to believing conspiracy theories might suggest that the process was intentionally steered to favor the 3A alignment, but no Deep Throat character has emerged as of this writing. Not too long after this all took place, the Cost Effectiveness Index, used by the federal government to evaluate the viability of transit projects, was reformulated.

3A was selected as the Locally Preferred Alternative (LPA) in 2009 and the real engineering work started. The plan was to put light rail in the Kenilworth Corridor and reroute the freight rail to St. Louis Park, but it came to light more recently that that would be considerably more complicated than we had thought. Putting the TCW freight trains on top of a two story berm would be required, and some amount of land would need to be taken, including chunks near St. Louis Park High School–potentially their football field. (Disclaimer: The author played mediocre football as a freshman at St. Louis Park High School)

St. Louis Park did not react positively to this development.

Earlier this year, we flew in some consultants from Kansas City for more study, but at some point the idea of the freight rail reroute fell out of popular conversation, setting up where we are right now. 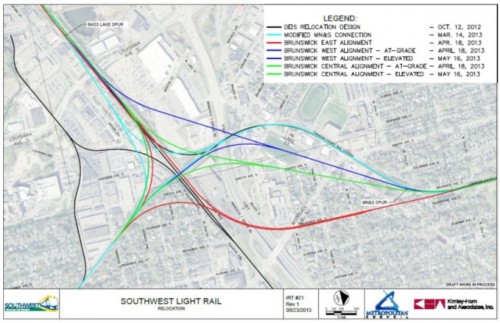 A Tunnel Under a Bike Trail!

After the consensus shifted away from a freight rail reroute, the conversation about “co-location” in the Kenilworth Corridor started in earnest. This went over about as well as the earlier conversations in St. Louis Park, but with a new dimension: money. The Kenilworth Corridor skirts some of Minneapolis’ most tony neighborhoods, whose residents also happen to be political donors–if you want, search for the 55405 and 55416 zip codes here. All that said, I’m personally hesitant to demonize the people in the Kenwood and Cedar-Isles-Dean neighborhoods any more than the people in St. Louis Park. Disregarding the train-crashing-into-the-high-school hysteria in St. Louis Park, the two groups’ arguments are essentially the same–they didn’t want trains in their backyards. There may be a term for that, but it’s kinda played out.

Unfortunately, the Kenilworth Corridor is not large enough to accommodate the freight trail, light rail, and bike trail without razing homes along the sides–notably, these townhomes. This was considered not great, politically. The pinch point is tight enough that you can only fit one set of train tracks and the bike trail in there. Simply moving the bike trail isn’t the answer. So a couple sets of tunnels were considered: a “shallow tunnel” and a “deep tunnel”. The deep tunnel would have dipped underground, subway style, for the length of the Kenilworth Corridor and cost a whopping $330 million dollars, and it was ruled out. The shallow tunnel would have had trains running below ground on both sides of the canal, but with tracks over the canal connecting Cedar Lake and Lake of the Isles, at a cost of $160 million dollars. There were some concerns that a shallow tunnel around the lakes would mess with the water table, but a study allayed those concerns. 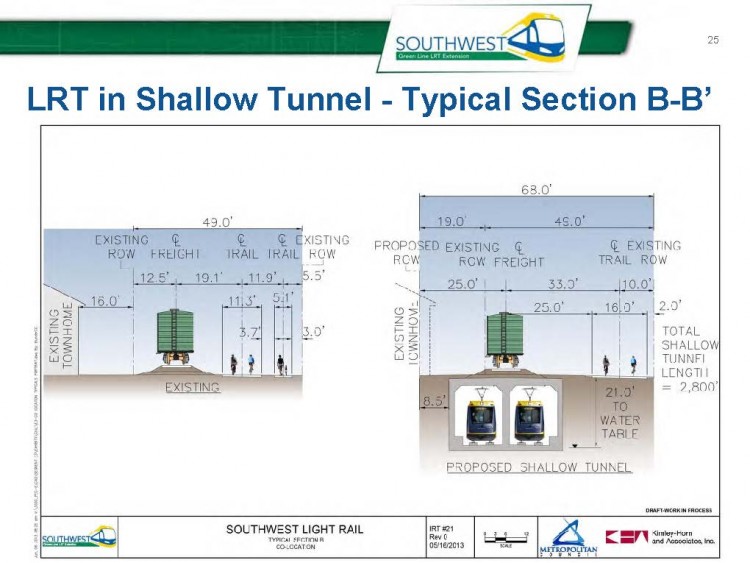 Last month, a deal was struck betwixt the City of Minneapolis and the Metropolitan Council, essentially scrapping the north shallow tunnel and using that money to restore a station and improve access to others. A potential lawsuit from either the Minneapolis Park Board or the folks in Kenwood is still possible, but the several sets of unsuccessful litigation thrown at the Green Line by the University of Minnesota, Minnesota Public Radio, and others suggests that the courts don’t look favorably upon throwing lawyers into the gears. The Minneapolis City Council still has not voted on the compromise plan, but there was a public hearing shortly after the deal was announced, setting the stage for a full council vote.

Yes, we did skip an Uptown alignment due to the expense of a tunnel under Nicollet Avenue, only to go with building a tunnel under a bike trail instead.

The general sense right now is that the project will probably be built. The Eden Prairie, Minnetonka, Hopkins, and St. Louis Park City Councils have all voted to grant municipal consent for the project. The extended extended extended deadline for the Minneapolis City Council to vote on municipal consent is August 30th, and they will probably approve it, and then we can move on to wrap up federal funding this fall.

For another, probably get things in writing, especially in the Go-Go 90s.

A huge amount of criticism has been directed at the political and planning process for the Southwest Corridor, largely because it’s been an enormous debacle (see above), but also because in America, trains are inherently controversial for whatever reason. When Steve Brandt wrote that Star Tribune article about the Southwest Corridor in 1987, there were people who hadn’t been born yet, and those people have since been born and now have their own kids that can walk around and talk about trains. It’s taken thirty years to be on the cusp of something that we knew we wanted to do during the Reagan administration. In that time, the costs of the project have gone up severalfold, the Midtown Corridor rail link was cut, and Eden Prairie has largely filled in.

Peter Wagenius, an aide to Minneapolis Mayor Betsy Hodges, had a pretty good quote about it all at a City Council Ways & Means Committee meeting last year:

There are folks who are extraordinarily invested in validating the process that has brought us to this point.

Regardless of how things have played out in Minneapolis City Hall in the past year, this is a pretty good way to sum it all up one sentence. We probably made a bad decision with the routing. Which isn’t an argument for the Nicollet Avenue alignment, because that alignment was not great, but rather an argument against building very expensive transit projects through parkland in cities in order to better serve suburbanites who will, for your $1.7 billion dollar investment, eliminate two car trips per day if they can park for free at a separately-budgeted $10 million dollar park and ride. And we kind of knew this five years ago, but we were already 20 or 25 years into the planning process, and it was really too late to change course without looking silly, or something.

At this point, the extremely elaborate and absurd Rube Goldberg machine of funding that we use to build transit projects prevents us from starting over with a new route. So what we could do is try to not repeat this process, if possible. Is it too late to stop the Blue Line (Bottineau) extension from cutting around North Minneapolis on Olson Memorial Highway, through Theodore Wirth Park on its way to a literal cornfield in Brooklyn Park? If it’s too late for that, what about the Gateway Corridor planning process, where we recently decided to go with $450 million dollars in bus rapid transit to run through mostly undeveloped areas of Oakdale and Lake Elmo? There’s a lot of room for improvement.

Admittedly, it’s very easy to sit on the sidelines and throw rocks at the process while professionals work under complicated circumstances and, at times, confusing political mandates. But policymakers should realize that if we continue to make objectively bad decisions with transit planning, we’re going to continue to have more debacles like this. We can and should do better for the future of our metropolitan area.