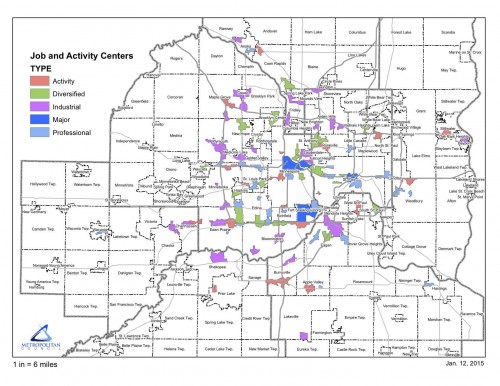 Employment clusters as mapped by the Met Council

Since Metro Transit purchased the privately-owned Twin City Lines in 1970, it has begun serving some of the many transit travel markets neglected by TCL’s downtown-oriented network of local bus routes. The first step was to extend those local routes to suburban shopping centers and residential areas. Simultaneously a very large system of rush hour expresses for downtown and University of Minnesota commuters was created. Next came a network of suburban transit centers connected by local routes that began to offer a skeletonized suburb-to-suburb service. Light rail and commuter rail soon followed.

Despite these achievements, there remains one huge market where transit seems unable to gain a foothold–the longer distance suburb to suburb trip. It’s not hard to understand why. To be economically viable, transit requires concentrated trip ends, and it really helps to have paid parking and walkability. The downtowns and the U of M have all of those things. So does the airport. The list ends there.

Within that short list, the sheer number of jobs dictates how much service can be supported. Met Council data from 2010 (it’s probably somewhat better today) show 133,000 jobs in downtown Minneapolis. That is enough to support express buses from every corner of the metro area. Downtown is fed by 17 local routes, 102 limited stops and expresses, and 3 rail lines.

Downtown St. Paul with about 65,000 employees has 13 local routes, 18 limited stops and expresses, and one rail line.

The U of M Minneapolis campus with a combined 70,000 students and employees (if I read the numbers right) has 11 local routes, 12 limited stops and expresses, and one rail line.

The airport/Fort Snelling/VA complex with 24,000 employees has 2 local routes, one limited stop and one rail line. Of course airport transit benefits considerably from the flow of airport passengers, Mall of America shoppers and VA Hospital patients who share the same services.

Would any of these clusters support more than a couple of local routes from the nearest suburban transit hub and maybe a reverse commute from the city? That’s how they are served today.

Transit service works best when trip ends are concentrated. The Met Council has calculated the number of jobs per acre for every employment cluster. Downtown Minneapolis has 77 jobs per acre. Downtown St. Paul has 69. The largest of the suburban clusters, I-494 from Hwy. 100 to France Avenue, has 30. Then it drops off quickly—the next three largest clusters average 16 jobs per acre. That number is pretty typical of the rest of the large suburban clusters. That kind of job density lowers the odds of transit being successful.

What would the express service look like? Since the single best candidate is the 494/France to 100 cluster, let’s see what the potential is.

Since the commuters arrive roughly evenly from all points of the compass, expresses would radiate in all directions to provide a one-seat ride. Let’s model the potential ridership by dividing the 360-degree travel sheds into corridors of reasonable width and see how many trips there are per corridor. I think an express bus serving a cone of 30 degrees in width would work, resulting in 12 corridors radiating from each employment concentration.

Given those assumptions, each 30-degree cone leading to this 43,000-job cluster would have 3583 round trip commuters. Compare that to downtown Minneapolis with 11,055 commuters in each 30-degree cone. Minneapolis sees about a 40 percent modal split, a number that is assisted mightily by expensive parking and high transit frequencies. Downtown St. Paul, with its lesser gravitational pull, only has about a 25 percent modal split.

Because of free parking, much less frequent service, questionable walkability and the probability of social ostracism (you’re weird if you take the bus), I believe it would be too optimistic to assign a 10 percent modal split to these services, so let’s assume 5 percent. That means a job cluster of 43,000, which has 3583 jobs per 30-degree cone, would see 179 of those commuters on transit. That’s 5 busloads per cone per rush hour, basically a 30-minute frequency if spread across the rush hour, with a couple of 15-minute buses at the peak of the peak.

We know from experience that large park-ride lots are the best tool to consolidate suburban trip origins, so starting these expresses at park-rides is a given. Choosing park-rides that are co-located with suburban transit hubs adds the potential for local buses to feed the express bus. Given the Twin Cities’ extensive network of bus-only shoulders, most new routes should be able to bypass traffic congestion. Combined with the traditional advantages of transit (lower cost and you can relax while someone else drives), one would think that a good bus service could be competitive.

On the employment center end of the trip, the express bus has to circulate through the employment center and provide convenient walking access to the individual employers. If the express terminates at the nearest transit hub, requiring a transfer to a circulator bus to complete the trip, that’s probably a deal killer. Few park-riders will put up with a transfer and few all-bus commuters will tolerate a 3-bus ride.

Even with these conservative assumptions, however, I’m skeptical that suburb to suburb expresses would succeed. Maybe to 494/100 to France, because it’s the largest by far. The others—very doubtful. A 15,000-job cluster with a 5 percent modal split would only have 63 round trip riders per 30 degree cone and that’s not enough for a viable service.

My gloom is enhanced by a history of failed attempts to serve this market.

Past and present failures

Suburb to suburb expresses have been tried before without success. In the 1970s three routes ran from the Burnsville Transit Center to east Bloomington and the airport, to central Bloomington and to the I-494/Hwy. 100 area. In the east metro, 3M co-sponsored buses between its Maplewood campus and White Bear Lake. Each route only ran a couple of round trips, so that worked against them. In all these cases ridership was anemic and the expresses eventually were discontinued.

Metro Transit has one long-running service, Stillwater and Lake Elmo to the 3M Maplewood campus with 12,000 jobs. 3M happens to be in the middle of the Route 294 express to downtown St. Paul, so the 3M passengers are gravy and not crucial to the route’s success. The service is decent—5 round trips (every 30 minutes) with auto-competitive travel time. And the result? Three daily passengers.

More troubling is the current case of Route 565. In early 2014 Target transferred a large number of employees from downtown Minneapolis to its Brooklyn Park campus. Many were established bus riders, so Target and Metro Transit collaborated to create a new express route from the southern Richfield park-ride next to Best Buy, center of a large employee concentration, non-stop to Brooklyn Park. Three daily round trips are offered and the route benefits from bus-only shoulders that run the length of its route on Highway 169, as well as on portions of Highway 62 and I-494. Furthermore, the fare is super cheap considering the 25-mile one-way trip length. 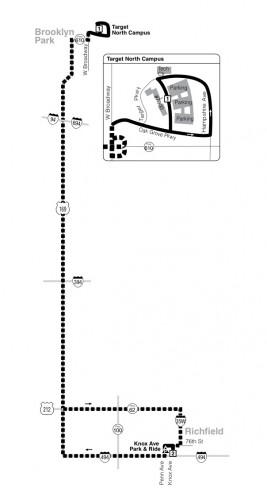 The results are extremely disappointing. Despite internal marketing at Target, only 17 employees make the round trip each day. That’s not sustainable and Route 565 will probably soon be history.

South West Metro Transit is also running to the Target North campus from Chaska and Eden Prairie with three AM and two PM buses. I haven’t heard how it’s doing.

Minnesota Valley Transit has started non-stop rush hour express service from Eagan to the VA Medical Center. This bypasses the Mall of America and the transfer to the Blue Line, reducing the travel time from 35 minutes down to 19 minutes. Once again, too new to know.

Suburb-to-suburb expresses are far down the regional priority list or not present at all. Not a single example appears in Metro Transit’s Service Improvement Plan. It raises the question of whether suburban landscapes can ever be retrofitted for successful transit to anywhere that is also suburban.

28 thoughts on “Suburb to Suburb Express Buses: The Final Frontier”