Since it is March with its basketball madness, streets.mn is looking to create its own March tournament bracket with streets.m(ad)n(ess) – Call for Nominations.  Commenters have been nominating a variety of projects and developments, but the Green Line seems to be an early favorite.

Putting the Target Layoffs Into Perpsective defuses panic following the news that Target Corporation would be laying off “several thousand” workers at the their downtown Minneapolis headquarters. The Minneapolis metro area also made national news with The Atlantic’s article The Miracle of Minneapolis claiming “No other place mixes affordability, opportunity, and wealth so well” which sparked responses about racial disparities and other ineqalities in the area. The Right Scale for Thinking Inequality unpacks some of the details about inequality in the cities of Minneapolis and Saint Paul, their suburbs, and the metro area as a whole. The Pedestrian Treatment is a brief invitation to brainstorming about possible locations for woonerfs (or woonerven) after Minneapolis announced its first woonerf in the Mill City Quarter housing development; commenters take up the challenge as well as clarify what’s a woonerf. 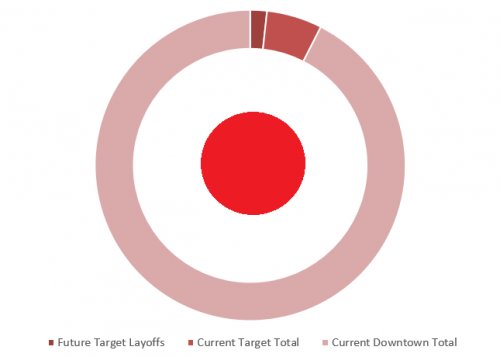 Target layoffs as a proportion of downtown jobs

Who Pays for the Transport Costs of School Choice? continues a discussion begun on the Transportationist blog called School Miles vs. School Choice. The Transportationist post criticized urbanists and neighborhood school proponents for placing proximity above other educational values; Who Pays? considers (and studies) the justification for using tax dollars to pay the costs if families “bypass their closest school (or two or three closest schools) in favor of a heightened educational experience elsewhere.”  This is the first post on the issue; the next will consider policy considerations at work in school choice and school transport discussions.

A Gallery of Traffic Signal Lenses and LEDs continues a series of posts about traffic signals. The Spotters Guide (part one and part two) is a “birdwatching guide” to the manufacturer, model, and approximate age of traffic signal equipment in the Twin Citiesas seen in the Twin Cities, which has been followed by posts on the history and aesthetics of traffic signals where part one covered vehicle signals in general, two and three were devoted to left turns and this one is part four.

Cyclist Compliance at Red Lights in Minneapolis studied whether cyclists stop at signals at 15 intersections in Minneapolis with high cyclist volumes (Six of which were also listed as having significant bike vehicle crashes) and the short answer is: Yes, 58% of the time.  This was the most commented post this week with discussion of how compliance with signals is related to cyclist choices for safety and a sidebar conversation about enforcement of having bike head and tail lights. 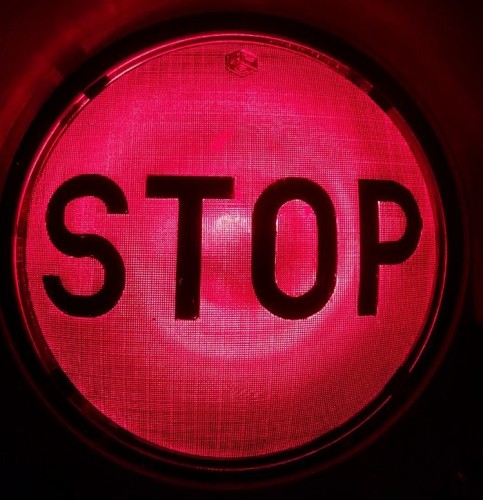 Stop! at the CH Command Lens

Although the Challenge ended yesterday, Roll With Us Transit Challenge: March 1-7, 2015, transit advocates urged state representatives and senators to “ride a mile in our shoes” before debating and deciding transportation funding affecting transit. Digging deeper into transit experiences, Getting to the Green Line: Seen through the Lens of a Wheelchair User guides us around obstacles and highlights issues wheelchair users and others with limited mobility face at stations, crossing streets, and just getting around. 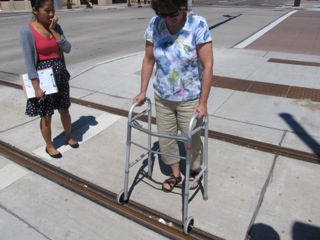 Past, Present and Future department

Several posts this week look at the history of places (and their people) to help us look at the present and future. Stone and Diamonds documents a bike tour last August through Saint Paul’s Lexington-Hamline, Summit-University, Midway, and Como neighborhoods stopping to meet Toni Stone (usually considered the first woman to play baseball in the Negro American League), visit the Wilder Foundation, and Joyce Kilmer’s fireplace. Tech High: A Tradition of Excellence, A Future in Flux goes to Saint Cloud to argue for preserving Tech High as a high school rather than building a new one at the edge. Historic Context for The Wedge’s Historic District provides the zoning and neighborhood backstory for recent developments in establishing a historic district in the Wedge. 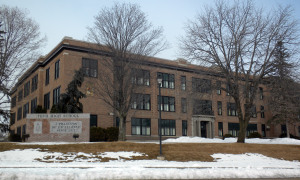 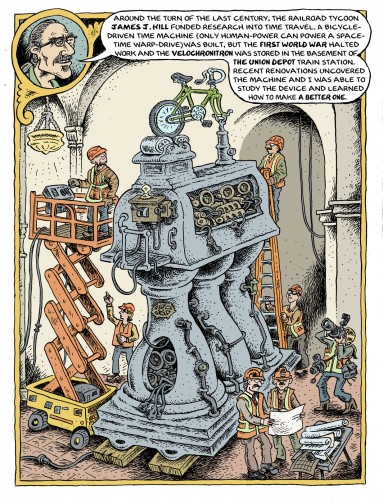 The Velochronitron by Ken Avidor

The snow is melting, hockey playoffs are underway (alas, the Gophers women’s team lost in the WCHA semifinals), and flowers are blooming further south; it must be almost Spring!  Have a great week!