Driving 28th Avenue from 38th Street to Minnehaha Parkway in south Minneapolis is a pleasure, a little too much so. Traffic is relatively light compared to so many busy streets in the city, the speed limit is 30 MPH, the road surface was repaved last year and is nice and smooth. The only likely place you have to stop is the signal at 42nd Street, but even there you have close to 50/50 odds of a green light. There is the occasional cyclist trying to cross at the Minnehaha Creek crosswalk. Otherwise 28th Avenue is clear sailing. Taken in isolation, smooth traffic flow seems like a good thing, until you consider all the people trying to cross or even access 28th Avenue. Testing some traffic calming measures such as four-way stop signs, curb bumpouts and alternative striping would be inexpensive and dovetail nicely with existing and planned land uses located along 28th Avenue.

The entire stretch of 28th Avenue between 38th Street and Highway 62 (the crosstown) should have its painted centerline removed in lieu of painted parking lanes and suggested bike lanes. There is precedent for this on 54th Street between Lake Nokomis and Portland Avenue (54th Street which has traffic counts of 4,300 vehicles per day, which is within the same range as 28th Avenue). Not only will this help improve safety for cyclists, a study released last year shows removal of the centerline slows traffic by an average of 7MPH. Seven miles per hour! That would move the average speed on the street from 35 to 28 or 32 to 25, which, in the event of an accident, could very well mean the difference between life and death. 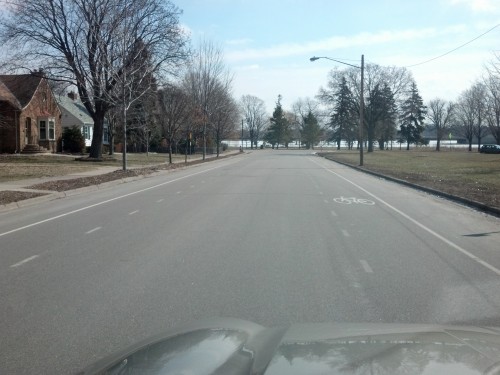 54th Street With Bike Lane and Without Centerline – a Slower, Safer Street!

I personally suggested this to Ward 12 Councilmember Andrew Johnson, and he checked in to it and replied that because the city has designated Nokomis Avenue (running parallel three blocks east) as an official bicycle route, it is not possible to paint bicycle lanes on 28th Avenue. I’m asking the city to reconsider. Nokomis Avenue is a relatively lightly traveled street with many existing four-way stop signs and is lined only with homes, whereas 28th Avenue has several major destinations, including Roosevelt High School, Roosevelt Library, Lake Hiawatha Park and two business nodes with many popular businesses. In other words, improvements to 28th Avenue would be meaningful and significant.

It has long been a source of concern about the danger that vehicles on 28th Avenue pose to pedestrians and cyclists in the crosswalk. In fact, it is drivers who seem the most concerned about hitting someone. A couple years ago the crosswalk signals had actuator buttons installed, which triggere a flashing light. Some will say this has helped, although I maintain the buttons are far enough from the path it isn’t worth the effort to use them. Occasionally when a car stops for a pedestrian or bicycle, a car following behind will pass on the right, creating an even more dangerous situation. The primary problem is the geometry and width of the roadway that leads to excessive speeds. 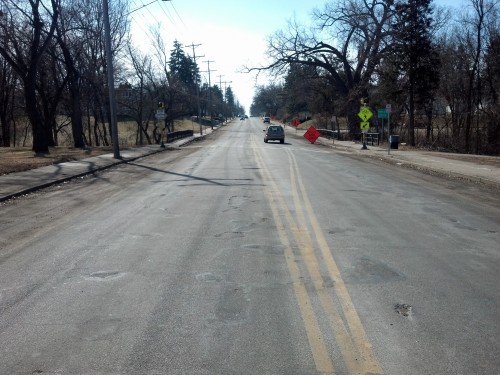 Last year the city painted what I understand is a mid-street pedestrian refuge, whereby traffic heading south is supposed to divert to the right. There are three problems I observe with this. The first is few drivers bother to swerve right, driving right over the paint instead (as the photo shows). The second problem is vehicles that do swerve around the “refuge” actually wind up closer to any pedestrians or cyclists waiting to cross. This is particularly troublesome when you consider state law states vehicles only have to stop for a pedestrian once they enter the crosswalk, which makes a lawful crossing all the more dangerous. Third, who the hell in their right mind is going to stop in the middle of this street in the first place? Would you? 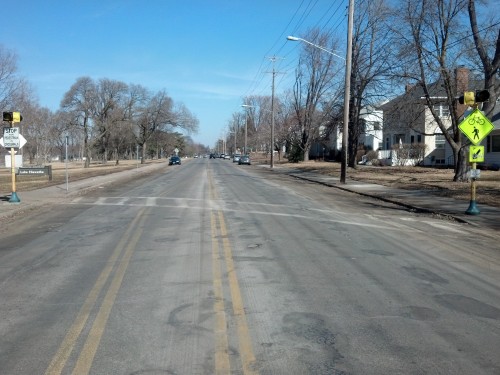 Would You Stop in the Middle of This Street? Time for Bumpouts Instead

My suggestion for the crosswalk is to erase the existing “refuge” and instead install temporary plastic bollards in the parking lane of each direction. These bollards would essentially be curb bumpouts, providing a more visible place for pedestrians to establish intent to cross, while significantly narrowing through traffic lanes. Hopefully this will create a visual cue to drivers and slow cars, particularly when people are present.

As with the centerline removal, I suggested this to Councilmember Johnson he indicated that because the 28th Avenue bridge over Minnehaha Creek is scheduled for reconstruction in the next couple years, now is not the time to study alternatives without bridge plans to also review. Again, I think the City of Minneapolis should reconsider. Now is absolutely the time to test alternatives that could make the crosswalk safer.

I am aware that the Nokomis-Hiawatha Regional Plan advocates for a pedestrian/bicycle underpass but also retains an undetermined access or crosswalk at street level. This is wise. For one, an underpass, if possible to build, will allow through traffic to avoid a crossing. However, eliminating the crosswalk has the potential unintended consequence of encouraging even higher vehicle speeds on 28th Avenue, which is certainly not an outcome we want. As well, we shouldn’t assume that all pedestrian and bicycle traffic is through traffic, and in fact I’ve observed on many occasions that cyclists and pedestrians follow the creek and then take 28th Avenue, or vice versa. The Angry Catfish bicycle/coffee shop’s location four blocks north only adds to this interchange of traffic between the creek and 28th. Human nature dictates that an access/crosswalk in some from will need to remain into the future, so let’s make this crosswalk as safe as possible, now and in the future. And with the Nokomis-Hiawatha plan hot off the presses, now is an excellent opportunity to test temporary curb bumpouts and traffic calming as we decide whether a bike trail under the new bridge is even feasible.

At a recent neighborhood meeting, a resident recalled that there used to be a seasonal three-way stop sign at 46th Street and 28th Avenue. I don’t remember, but it’s a great idea year-round! A stop sign would make it much easier to cross 28th to and from Lake Hiawatha, and may well slow traffic at the creek crosswalk a block to the south.

I had a lot of fun with the 44th Street intersection, and yes I’m being sarcastic. The traffic signal at 44th Street was replaced last year as part of repaving 28th Avenue. Regardless, it should be tested as a stop sign, which would improve the safety and access for people to get to Lake Hiawatha Park, one of the most loved places in my neighborhood. The signal is one of those that stays green for north/south traffic on 28th unless a car or person triggers a signal change, and that is where the problems start. I observed, tested and timed the signal at midday. I observed a westbound vehicle on 44th Street stop at the signal (rolling over the in-pavement actuator) and await a left turn. It took approximately 35 seconds for the signal countdown to begin. Adding the 12 second countdown, that is a total of a 50 second wait, and in that time not a single vehicle passed by on 28th Avenue. Incidentally, when a vehicle triggers the signal a Walk signal does not appear! I then “applied” to cross on foot, and just as before, it took 50 seconds before I could do so, and when the Walk signal appeared it took me five seconds to cross. Incidentally, as I did so, a cyclist on the 28th Avenue sidewalk (maybe if there was a suggested bike lane in the street, he’d choose to ride there instead) saw no traffic and just crossed against the red, safely. 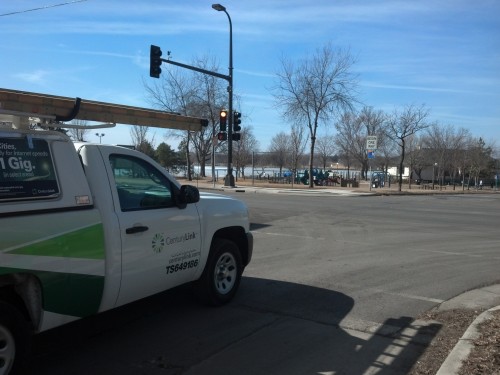 Vehicle Waiting for 44th Street Signal to Change. Pedestrians Must Apply to Cross.

My general observation is a great number of pedestrians don’t bother to press the button. Worse, they press it and then grow impatient and just cross anyway, meaning drivers have to pointlessly stop for a red light 30 seconds later. More perverse is that for drivers, when a car or pedestrian triggers a red light for 28th Avenue, drivers have to wait through the entire signal. That’s a small quibble, but the larger point is a four way stop sign instantly prioritizes pedestrians. So we can argue that more cars travel 28th Avenue compared to cross to get to the park (FYI – we haven’t counted), but that misses the point. If we want to meaningfully prioritize all modes of transportation in our city, then installing a four-way stop sign is the best alternative. 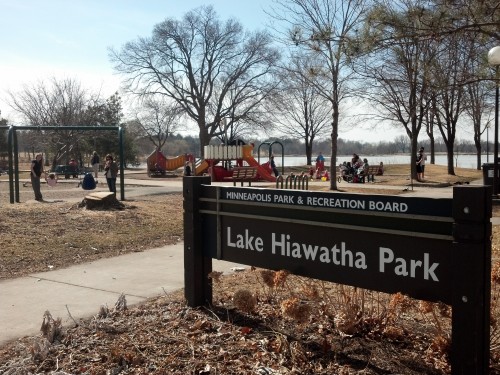 I’ve beaten this intersection to death, but think about this for a moment. With the current signal at 44th, the only ways to cross 28th Avenue are to “apply” and then wait 50 seconds to do so, or break the law. Considering a wonderful park and playground that has no parking lot (and isn’t considering one) is right there, we should be doing a better job encouraging people to arrive on foot and by bicycle.

My eight year old son isn’t comfortable walking one block to the library because he has to cross 28th Avenue and traffic is too busy and fast. Therefore, I believe a four-way stop sign at 40th Street would not only encourage him to cross but also make it safer to do so for all library visitors. Moreover, it would help the hundreds of kids and visitors at Roosevelt High School. 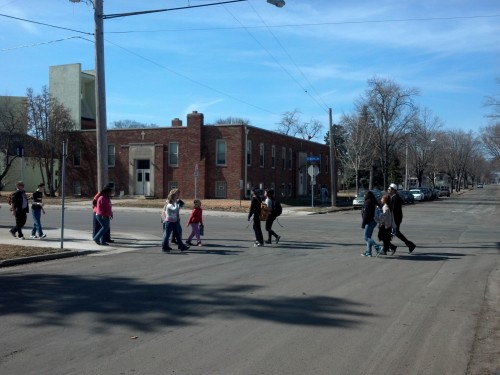 Crosswalks at 40th Street and 28th Avenue Are Heavily Used

Considering traffic counts (ADTs of 3,700 between 38th and 42nd, 5,900 between 42nd and Minnehaha Parkway and 6,000 between the parkway and 50th Street, then 4,650 and 6,100 farther south where four-way stops exist every two blocks), it could be argued that four-way stop signs can be consistently placed every two blocks along the entirety of 28th Avenue would better manage traffic speeds. The existing precedent south of the Parkway is evidence that it can work.

There will of course be some who view these ideas as impediments to their fast commute, and I understand the impulse. I for one am willing to sacrifice a little speed and privilege to allow for the right of all citizens to have safer and better access to our city.

The City of Minneapolis has made significant strides very recently with bicycle and pedestrian improvements to make the city safer for all people, so let’s continue that momentum. Slowing traffic speed can occur in many forms, which will improve access for all people to the parks, schools, libraries and businesses our neighbors love. Let’s also enhance the exciting plans laid out in the Nokomis-Hiawatha Master Plan by making it easier for people to access Lake Hiawatha and Lake Nokomis. Changes to 28th Avenue can genuinely make our neighborhood safer, more accessible and more pleasant for all people, not just drivers. We can test all of these measures quite inexpensively, and I’m willing to work with the Standish-Ericsson Neighborhood Association, Councilmember Johnson and the new Bike/Ped Coordinator Matthew Dyrdahl to make it happen.. Now is the time to try it, so let’s do it!

16 thoughts on “We Can Make 28th Avenue Better for People”