As part of an ongoing series on traffic signals, here I’m taking a shot at answering some common questions that may come up.

1) What can pedestrian sensors do?

Although pedestrian sensors are uncommon for all the usual reasons (cost, engineers don’t see need, old equipment, etc), there are some neat things they can do. Besides being able to call a pedestrian phase if a pedestrian is present, a second sensor can be mounted pointed toward the crosswalk. This can extend the pedestrian phase if the pedestrian is especially slow. Or conversely terminate it early if it’s a runner or bicyclist. Perhaps by mounting one farther back on a multi-use path they could call a phase if a bicycle or pedestrian is approaching, hopefully giving a walk signal by the time they reach the intersection. The idea is not new; some early ones experimented with pressure sensitive plates, but modern ones use microwave detection.

2) Why do we still have push-buttons if the “Walk” sign always goes on (ped recall)?

This is covered pretty thoroughly in previous articles and my comments to them, but basically ADA (at least as implemented in Minnesota) absolutely requires a station with  audible and tactile feedback (in the form of an arrow that vibrates) next to the crosswalk.

First, a station that includes feedback, with all the sophisticated electronics and simply lacking one mechanical button doesn’t make sense, either to produce as a product or for agencies to stock spares for. You’re probably talking about a part that wholesales for a couple of cents for a $400 station that’s part of a $6000 system (and can cost well into five figures to retrofit an existing intersection).

Second, if there was a station without a button, it would still look like it had a button, people would push at it and be confused when it doesn’t move or do anything (if ped recall is enabled or the button has already been pushed the speaker says “Wait”, but it doesn’t affect the cycle.) There’s already a myth that pedestrian buttons don’t “do anything” (that apparently started in New York when they converted from actuated controllers to fixed time and disconnected the buttons without removing them).

The Econolite push-buttons, as used with the famous California neons, would turn a small red light to green to acknowledge that the button had been pushed. This was probably not more widespread due to the maintenance of the incandescent lamps, and has now finally been coming back with the new electronic buttons.

As has been discussed before, agencies vary widely in how rapidly they are bringing existing infrastructure into compliance with the ADA. Not just traffic signals, but removing utility poles from the middle of sidewalks.

Guidance in the past has been vague, for example the MUTCD does not require accessible signals, and disability rights groups have in the past conflicted with each other, but finally the FHWA made the statement:

“Implementing regulations for Title II of the ADA, which covers State and local governments, also address “communications and information access,” requiring ‘effective communications’ with persons with disabilities. In the sidewalk/street crossing environment, this would include accessible pedestrian signals, markings and signage.” (FHWA, 2004).

And with the “Public Right-of-Way Accessibility Guidelines” (PROWAG) under development, it is expected accessible pedestrian signals will be mandatory.

But the ADA only requires modifications to existing infrastructure when it can be done without “undue financial or administrative burden.” So far, modifications have been up to the whims of individual agencies and how far disability rights groups want to push things. Minneapolis and Hennepin County, for example, aren’t always using them in new construction. By contrast, MnDOT, which was pushed by disability rights groups, feels they have to include them every time they go smooth out some bumps in the road, and will actually remove crosswalks rather than leave them noncompliant or upgrade them.

There generally is an impact to motorists, as you more or less double the time they cannot use the intersection (the exception being if the pedestrian phase is long enough and motorists few enough that motorists don’t fully utilize the green time if a pedestrian phase is present), but they are such an advantage to pedestrians that they are beginning to be implemented in areas with heavy pedestrian traffic anyway (one study showed a 60% decrease in vehicle + pedestrian accidents).  The MUTCD only specifically allowed them in 2009, so there are the usual issues with older equipment not having the capability, and of resources required to implement them.

One area where I feel a leading pedestrian interval would be appropriate is Berry/Calhoun Parkway and Richfield Road. This has a lead left and in practice pedestrians and bicyclists on the very heavily used trail often jaywalk as soon as the cross street turns red, or at least get confused when they don’t get an immediate walk (It doesn’t help matters that during non-peak period it is permissive only). It would be better as a lag left with recall enabled and a leading pedestrian interval.

4) Why won’t the light turn to “Walk” if the same direction has a green left turn arrow?

Sometimes it’s just the engineers didn’t think of it and implement it, but this requires the “pedestrian overlap” outputs on the controller be used, not the standard outputs, with associated reprogramming as well as additional load switches. The controller may be old and simply not have that capability. There may be no room in the cabinet for more load switches. Implementing this certainly requires wiring changes in the cabinets. Always much more complicated than setting a menu item on a controller

Here’s a typical cabinet, you can see in #4 that load switches plug directly into the backplane, #3 If there are no empty sockets you basically  have to replace the cabinet, probably with a bigger one, and thus probably requiring concrete work… You can’t simply shove an extra load switch in some nook and cranny.

5) Why, when I pull into the turn lane, does the side street turn green first with no one there?

First, it could simply be a fixed timed light where there is no sensing of vehicles. Second, skipping phases where there is no demand is a fairly recent concept. It simply didn’t exist in electro-mechanical or early electronic controllers. So it might be that no one has worked on and upgraded the intersection recently.

Or, the loop detector could be broken, as often happens. If they break they are supposed to default to the “sense” position so calls are always generated.

6) If the cars have the green light why don’t I get a “Walk” signal when I push a button?

“Pedestrian Reservice” does exist and is an option on most modern controllers, but is subject to the minimum pedestrian phase time. You can’t promise the controller “If you give me a Walk, I’ll hurry across.” Since walk intervals tend to be short compared to clearance time, there’s usually not time to give a walk if a pedestrian is not there before or at the beginning of the vehicle phase.  Simply extending the vehicle phase until the pedestrian phase can get done would lead to all kinds of issues with coordination. The “Home Depot” intersection previously discussed does have reservice even if it doesn’t have recall to cross the driveway and side street.

7) Why don’t signals flash at night or during times of low traffic?

Nothing’s more irritating than coming across a red light late at night when no car is in site. In Minneapolis where there are many fixed time intersections, it can even be a while before it changes. Basically night flash was removed in Minnesota because there have been a number of studies that it’s safer to have full operations 24/7, as well as actuated lights becoming increasingly common. Various studies show a reduction in night-time accidents from 27% to 95% when signals run 24/7. In theory if a light is red, it should turn green as soon as a motorist arrives at 3:00 AM.

As I’ve mentioned repeatedly, engineering fundamentally balances efficiency and safety; Minnesota engineers try to tilt the balance towards safety as opposed to efficiency in a lot of ways, most visibly with how prevalent protected-only turns are (Only in California have I seen more); this balance explains why night flash is extinct in Minnesota. With the increasing number of actuated lights and the introduction of right turn on red, motorists at least don’t have to wait as long as they would have in days past.

8) Can I change a traffic light to green with my TV remote or flashing my headlights?

Preemption is triggered by a strobe light mounted on emergency vehicles that flashes at a rate different than what a commercial strobe light will do. After electronic geniuses started building their own triggers, Minnesota specifically outlawed having one in your vehicle (although I have one for my home setup). And in case anyone still has ideas, they’re not easy to build; they require more precision than can be obtained with simple “Electronics 101” type resistor/capacitor timer circuits.  Also, they won’t work on the street anyway anymore, because the flashing is now encrypted.

9) What are those blue lights on some traffic signals?

To tell the cops waiting in the next driveway you just ran a red light. The first installation was at the now replaced signal at County 5 and MN 13 in Burnsville and was improvised with a standard industrial fixture; now there are specialized LED lights available. Also, those cameras on top of the signal mast are not “red light cameras,” they’re generally video cameras or microwave sensors for detecting cars, and go no farther than the traffic cabinet. Some MnDOT intersections do have traffic cameras, but they are mounted much higher up.

10) What about driver-less cars?

I really am excited about driver-less cars.  Imagine being able to start out to Chicago at night, fall asleep, and then arrive in the city with my car in the morning. Imagine editing a post for streets.mn while stuck in traffic. Imagine ordering fast food, or even slow food, on a touch screen and it would be ready when you pull up (and a lot easier and safer to eat in your car). I’d probably eat at Applebee’s instead of Arby’s if it were just as convenient. 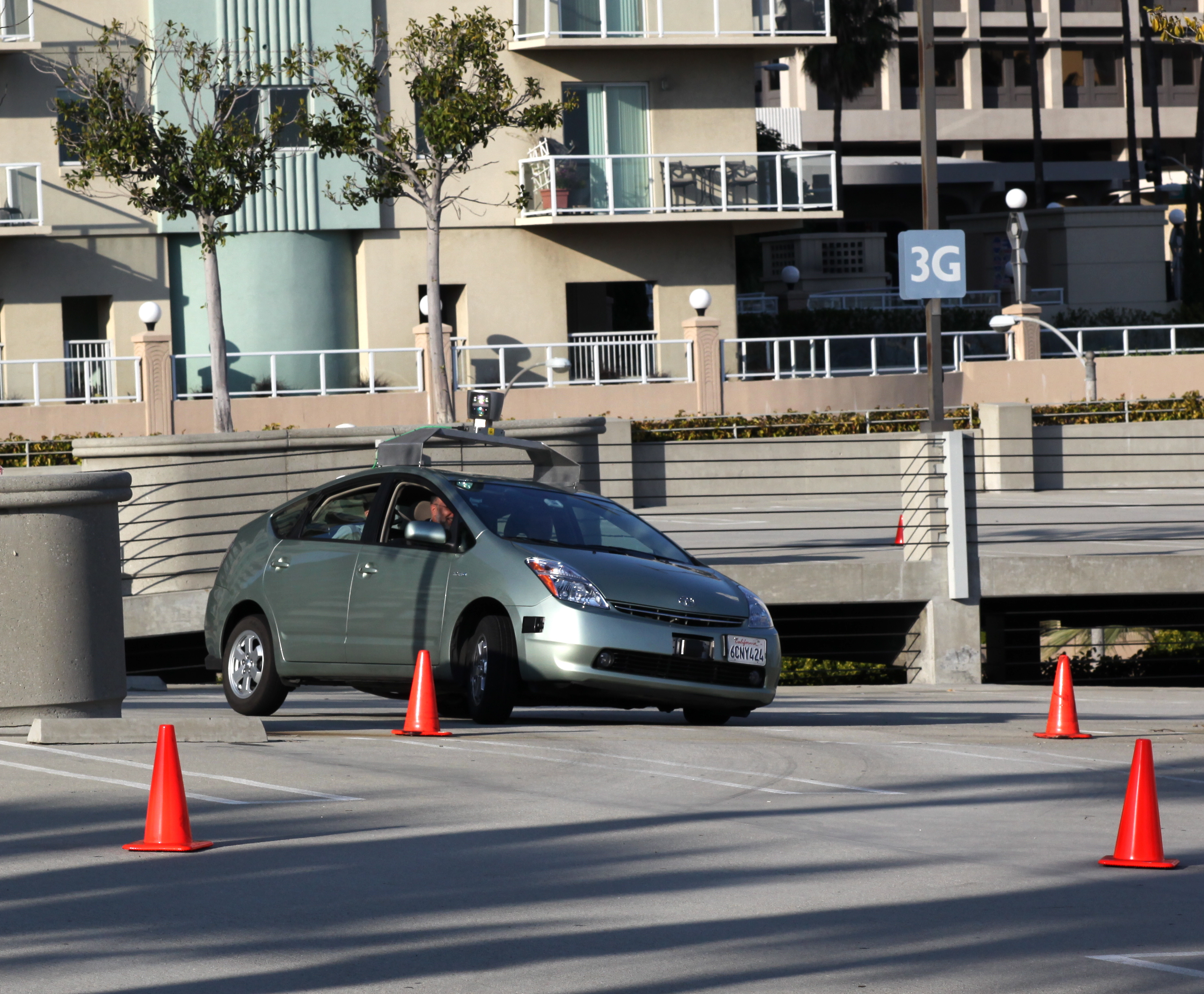 But getting back to the topic, think of how fundamentally unchanged the interface between traffic signals and motorists is despite nearly 100 years. A traffic signal controller can only tell if a car is there or not, not how many are there, or how many will be coming it’s way in five minutes. A driver can only see and react to a red light, not know there’s a string of red lights five miles away. So it’s easy to see how revolutionary cars communicating with traffic control equipment could be: No wasted reaction time, signals which know all about traffic and can react accordingly; cars which can reroute if there are a bunch of red lights ahead. Despite frustration with the present, I see great optimism for the future.