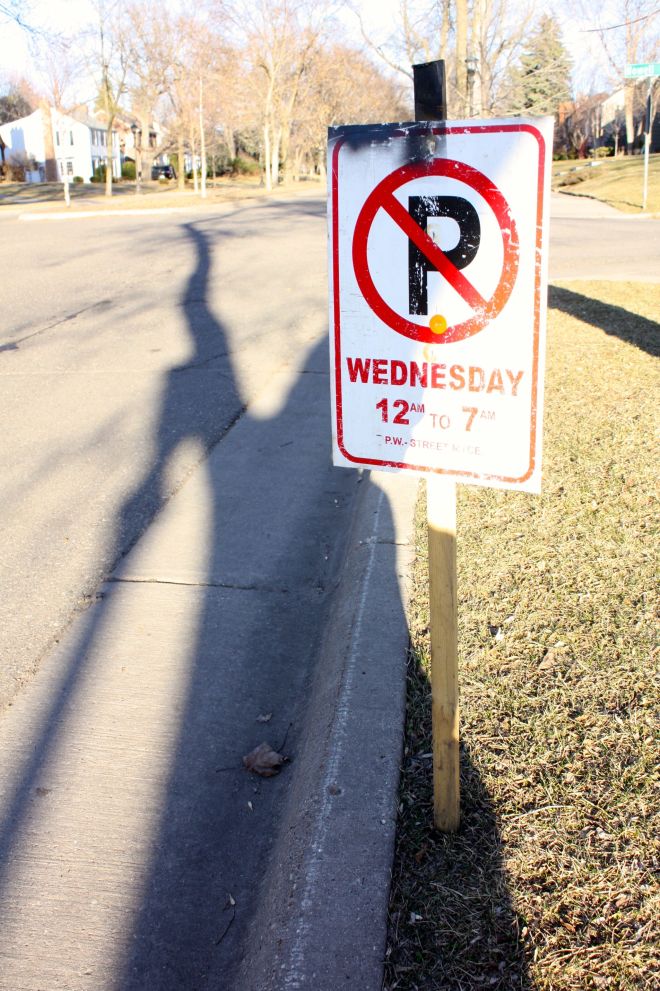 The temporary No Parking sign is indeed a sign of spring. It means the post-winter street cleaning is imminent.

The trees remain bare, the sides of most streets are ensconced in five months of winter grit and the temperature dips quickly as evening approaches. But none of that matters because it’s March 31st and my bike and I are out of the basement and on the streets for the first ride of the year!

One has to look hard to find color this early in the spring – flowers aren’t poking out of the soil and the greening of lawns and trees is a few weeks off. At 1890 Yorkshire, the browns and grays made way for vibrant children’s artwork. 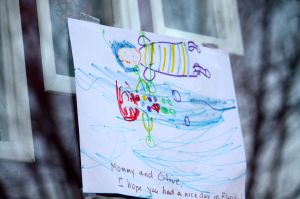 Colvin Avenue is another of the Highland Park streets, undulating and without sidewalks, that resemble the suburban landscape. Most of the homes are single story ramblers built on large lots in the 1950s The home at 1778 Colvin is in the midst of a major remodeling, but that’s not why I stopped. Rather, the movement of several deer in the front yard led me to scramble for my camera.

One deer stared my camera and me down from about 20 feet away.

Hilltop is a block long street that intersects Colvin on the south and Edgcumbe to the north. The name is a tip-off about the topography of the area.

After my dalliance with the deer, I followed Colvin Avenue north to Edgcumbe and traveled northwest on Edgcumbe for a block until the road turned south down the hill. About halfway down I saw this boulder retaining wall. Since I was moving at more than 20 miles per hour I had to turn around and climb back up Edgcumbe to take this picture. 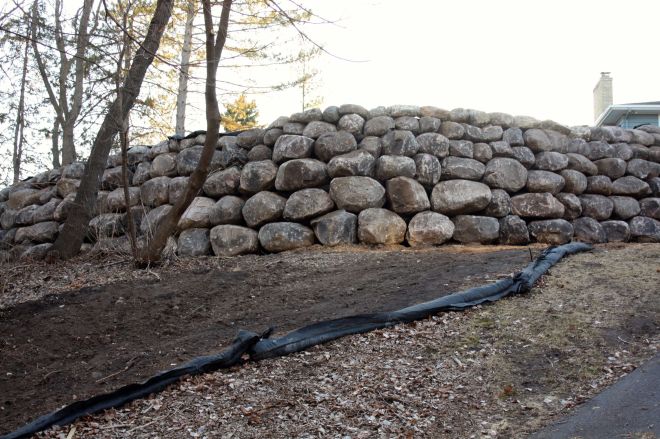 I have dozens of questions about the construction of the wall, including, ‘How many boulders are in the wall?’, and ‘How are the rocks held in place?’.

Continuing down the Edgcumbe hill I shot right past the amusingly named Sunny Slope Lane. It’s one of the handful of streets in Highland Park I’d never ridden on in nearly 30 years living here, so I turned around to examine Sunny Slope Lane.

Two of the homes on Sunny Slope Lane. Colvin Avenue sits atop the hill behind the grey house.

A deer, quite likely one that I saw earlier on the ride, stands at the top of the hill, in what is the backyard of a Colvin Avenue home.

As I took photos, one of the neighbors came out to ask me what I was doing. I explained the mission of my blog to Frank Windisch, a 59 year resident of Sunny Slope Lane. Frank and his wife Shirley had an appointment and couldn’t talk with me this evening but were quite willing to meet another time. That time ended up being the evening of April 6, and the temperature hovered below 40 as I rode to 1795 Sunny Slope for the interview.

Shirley and Frank Windisch in their home at 1795 Sunny Slope Lane.

Shirley explained that she and Frank moved to 1795 Sunny Slope in 1956 because Shirley’s father was a contractor who owned the lot on which the house was built. “Frank was in the service. When we came back from Germany – I was over there with him from 1954 to 56. And he (my Dad) had the lot and said, ‘I’d like to have you build a house on that lot.’ And so, we decided to do it.”

Shirley went on to say that her dad put some nice custom features into their home. “My dad had a real eye for construction. The ceiling is cedar and that’s 4 inches thick.” 4 x 4 tongue in groove boards.”

Another distinctive feature of their home arose from Shirley and Frank’s time overseas. “When we were in Germany in the Bavarian area there were homes that were ski chalets with the overhanging eaves; we loved those homes. So we said would like to have eaves that overhang further than the average eave does on the homes you’re building. He said, ‘We can do that.’”

The custom eaves on Shirley and Frank’s home have a noticeably longer overhang than most.

Frank added, “Aside from the design characteristics which we’ve always loved, it has prevented the sun from beating out the windows. The rains don’t come to the windows nearly as easily as if you had no eaves or very little eaves. These windows are the original windows when the house was constructed.”

The original driveway remains and is still used but instead of leading to the garage, there is the family room. (Photo shot August 2015)

As Shirley and Frank’s family grew so did their need for more space. Frank said, “The house was originally a three bedroom rambler and then we had the garage turned into a family room, ’cause we had six kids and we needed more space.” A dining room and new garage were also added to the home. 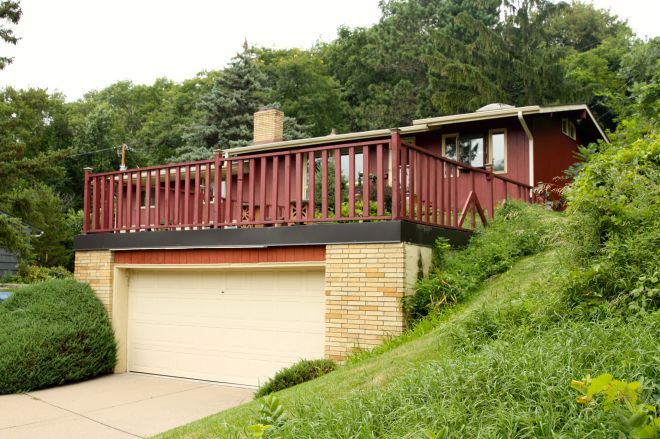 The Windischs built a new garage with a deck on top, on the east end of their property. (Photo shot August 2015)

“We have a problem with runoff and springs. We’ve had a number of landslides over the years.” Frank Windisch 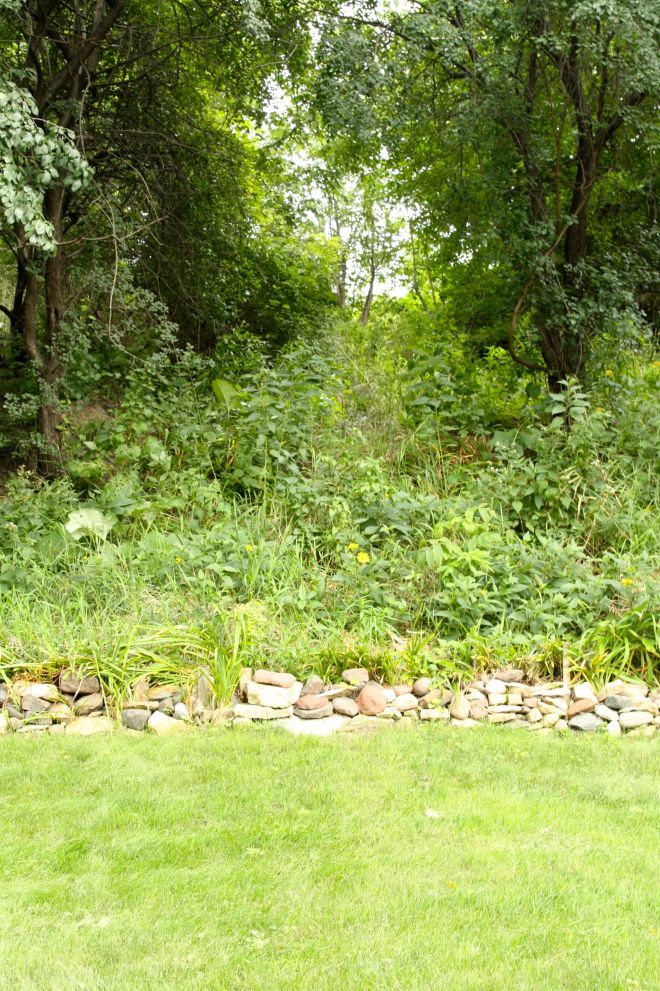 According to Frank, the steep slope in the backyard has meant battling land slides, “We had three major slides and the last one was like four years ago, but I think that’s the end of it because it’s (the dirt) found its own level.” (Photo shot August 2015)

Among the dozens of memorable neighborhood events over their 59 years there, one involved then-mayor John Daubney, who purchased a lot on Colvin, directly north and up the bluff from Shirley and Frank. “He had the lot filled in because there was just a big ravine there and that was directly behind us,” Frank told me. “He brought in fill from construction projects around the city and dumped all of that into that ravine and built a house on top of it. It took months to dump, dump, dump.”

Plants and trees cover the dirt poured into the ravine for construction of former Mayor Daubney’s house on Colvin Avenue, behind and above the Windisch home. (Photo shot August 2015)

Before building the mayor’s house on top of the new fill, Frank told me the sound of a pile driver echoed throughout the neighborhood, “They pounded timbers down til they hit bedrock then they could build the house on those timbers. And I still remember that boom, boom, boom for days.”

Most moms did not work outside the home in the 1950s and ‘60s, which provided plentiful opportunities for neighbors to become good friends. That’s exactly what happened around the Sunny Slope neighborhood. One evening in 1961, Shirley, Frank and other folks from the area got together at a neighbor’s – Dr. Fischer’s – house. Frank explained, “One time we were playing cards there and Shirley says, ‘I’m getting contractions.’ So Doc Fischer says, ‘Let’s go into the bedroom. I’ll check you out.’ So he says, ‘You’re ready to go. Let’s get out of here! Card game’s over!’” In case you’re wondering, Shirley and Dr. Fischer made it to the hospital for the delivery of their daughter Monica.

Several years later, a developer’s plan to build an apartment building on unimproved land at the end of Sunny Slope Lane stunned area residents. The property was zoned for single- and two-family homes and neighboring property owners overwhelmingly opposed changing it. Frank told me, “The developer persisted and brought it before the city council and asked for a vote from the city council as to whether he would be allowed to build apartments.”

The City Council agreed to rezone the property, without the required written consent of two-thirds of the residents living within 100 feet of the proposed apartments, The Council’s rezoning violated a City ordinance passed nearly 50 years prior.

Frank told me that got neighbors swiftly organized against the development. “Linn Firestone, at the top of the hill on Colvin, sent a petition around to the neighbors that were involved in the process and asked them if they’d they would contribute costs for him to take it to the Minnesota Supreme Court. It would cover his costs he wouldn’t charge for his (legal) services.

“All the neighbors donated the necessary funds and it was brought before the Supreme Court and they squashed the Saint Paul City Council decision to allow the apartments to be built.

“It made the papers. They called this area ‘the silk stocking neighborhood.’” Frank told me, laughing.

The article in the Saint Paul Dispatch newspaper reporting on the ruling by the Supreme Court of Minnesota on O’Brien et al., v. City of Saint Paul.

“There are cogent reasons why local owners are entitled to a voice in rezoning. They are the ones most vitally concerned; the usefulness and value of their property may be involved. When zones are established, citizens buy and improve property relying on the restrictions provided by law. They have a right to the permanency and security that the law should afford.”

Shirley and Frank are wonderful people with colorful stories about their part of the City and I am delighted that our paths crossed.

From Sunny Slope Lane I took a zigzagging course to the entrance to the southern section of Hidden Falls Regional Park, where Prior Avenue meets Mississippi River Boulevard South.

The sun hovers above the horizon as viewed from the Hidden Falls Park entrance.

The park wasn’t open for the season yet but that didn’t deter me from a quick trip in. The road into the park, officially called Lower Hidden Falls Drive, or Road (depending upon the map), descends under the Highway 5 bridge and coils back under in the opposite direction, ending at a parking lot a few tenths of a mile to the east.

Lower Hidden Falls Drive dips out of sight. Above, the Highway 5 bridge over the Mississippi River.

All in all, Lower Hidden Falls Road presented me with a 200-plus foot drop in about a quarter mile. I elected to return the way I came to burn some of those winter calories. 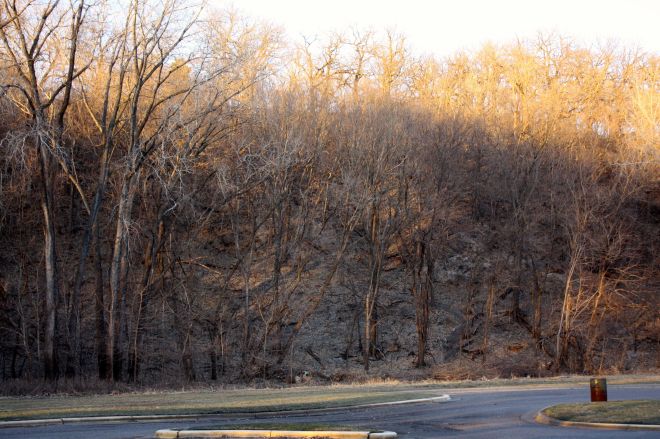 The view up the bluff toward Mississippi River Boulevard from the Hidden Falls Park parking lot. Once the leaves fully cover the trees, it will be virtually impossible to see even halfway up the slope.

The underbelly of the Highway 5 Bridge, looking south-southwest toward Fort Snelling.

Before I began the upward climb to Mississippi River Boulevard, I stopped under the Highway 5 bridge. There I noticed a couple of things that caused me some unease-a basketball-sized chunk of concrete and several rebar that obviously dropped from the bridge; and upon looking up at the bridge, a considerable space from which concrete had fallen.

Metal rebar and a section of concrete that dropped from the underside of the Highway 5 bridge.

Looking up at the underside of the bridge, I could see where several large pieces of concrete had fallen.

Fortunately, MNDOT was less than a month from starting the obviously necessary re-decking of the bridge. I adjusted my helmet and quickly and carefully zipped under the bridge. I paused a final time in the park to watch a well-bundled boater fishing.

An early-season angler works the Mississippi between Hidden Falls Park in Saint Paul and Fort Snelling.

With that, back on the bike to scale Lower Hidden Falls Road to go home. (Full disclosure: I needed a couple of rest stops on the way up to the River Road so even with the indoor biking, I’ve got to get back in shape.) Although the color pallet consisted almost exclusively of greys and browns, the bare trees and hills allowed me to see some regular scenery in distinctly different ways.

Click on the link for the map of this ride: Garmin Connect.