Previously I wrote about the past and present of my neighborhood, the Oxboro neighborhood of Bloomington. There’s been a few modest improvements for bicycles and pedestrians, including the addition of countdown pedestrian signals and this new sidewalk to the VEAP social services building with a rectangular rapid flashing beacon, and new marked crosswalk to cross Lyndale Avenue. 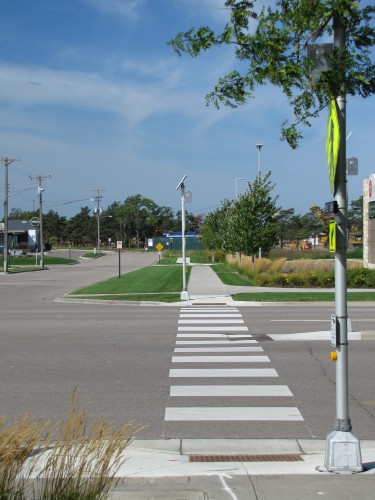 Although I’m basically satisfied with the way things are, here I start to fantasize about changes that could be made.

So Here’s What I Propose: 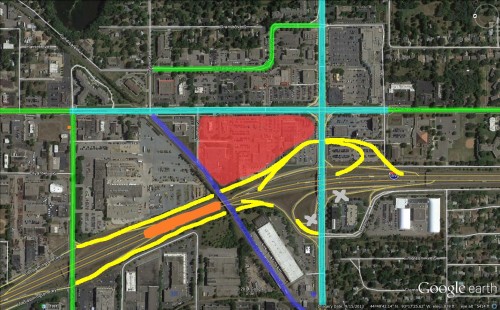 The most notable change is the addition of a loop ramp from eastbound to northbound. This was actually envisioned as phase two of the interchange project back in the 1980s but not implemented–you can see the extra space available on the northbound side of the underpass.  The Orange Line documents hint at not building overly elaborate stations at 98th Street in anticipation of “future interchange reconfiguration.” This accomplishes three things: (1) it fixes the problem with heavy vehicle movements conflicting, (2) it eliminates the free right, and (3) with no left turn lane needed on the bridge, that can be given over to expanded bicycle and pedestrian options without widening the bridge structure.

The ramp to southbound is removed, the existing carpool ramp off the frontage road expanded, and the carpool bypass moved to the loop. This might even have an operational advantage to motorized vehicles, since eastbound to southbound and southbound to eastbound traffic would no longer cross. The northwest loop is tightened and realigned to Dupont Avenue. The access to the office building is changed to 3/4 access. Office workers would still be able to easily access the southbound freeway by taking a right and then crossing 98th and going around the loop. The ramps to and from 94th Street to the south are eliminated in favor of the frontage roads.

The net result is an important, high volume interchange remains friendly and even improved to motorists, while the high speed movements on and off 98th Street that pedestrians now have to negotiate are eliminated.

Here, the free rights are removed and replaced with conventional right turn lanes, and the useless auxiliary lanes converted to cycletracks. South of 98th Street there’s not enough room to have a double turn lane and cycletracks, but banning the left turn from Lyndale Avenue southbound into the shopping center would allow lengthening the northbound lane. Southbound at 98th Street there is room for a double lane. North of 95th Street and south of the business district it is converted to a three lane configuration. 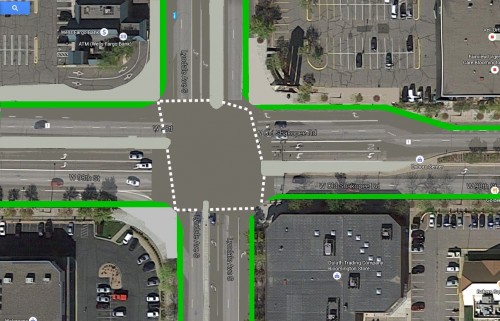 Potential reconfigured 98th Street and Lyndale Avenue intersection, with new cycletracks in green and refuge islands on the east, west, and north sides. Trees would of course be possible in the corners and medians, but I’ve not shown them here.

I’d add cycletracks with space taken from the auxiliary lane between Grand Avenue and Lyndale Avenue; probably east of Nicollet Avenue, and definitely east of Portland Avenue, a three lane section will suffice. If more lanes are maintained to Portland I’d buy out a couple of houses to eliminate the short “four-lane death road™” segment from 3rd Avenue to Portland Avenue by adding a center turn lane or median.

You’ll note I haven’t mentioned “bicycle lanes,” just cycletracks. This obviously represents my biases, since I don’t use bicycle lanes at any time, anywhere, for any reason. I want something more than paint between me and cars when I’m on a bicycle. But in the real world with other people planning, that would be an option. Similarly on-street parking is something I don’t want, wouldn’t use, and see no need for (the last time I really parallel parked was my driver’s test), but would be possible along “Clover 2.0” along Lyndale Avenue.

Thinking of Bloomington as a whole for a minute, the four-lane death roads all get road dieted, except for Old Shakopee Road west of the freeway which gets a five lane section. (Traffic counts are above 20,000 for most of it, due to Hyland Park limiting east-west options). The Lyndale Avenue cycletracks go from the new bicycle crossing at the Minnesota River bridge (which is going to get replaced sooner or later, and it looks like sooner), to the 86th Street bicycle lanes, the 98th Street cycletracks go to at least the new Nokomis-Minnesota River Regional Trail and the under reconstruction Old Cedar Avenue bridge along the newly road-dieted section.

(Some of the the non-arterial death roads are already being restriped, but I’d like to think bigger than that, towards most of the arterials and protected tracks instead of paint). 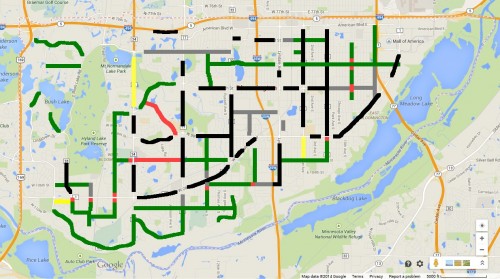 Status of Four Lane Death Roads as of a year ago: Green: 4-Lanes to 2/3 Lane, Red: Kept 4 Lanes. Black: Arterial (Not currently eligible), Grey: Not yet resurfaced, Yellow: Under study or planned.

Moving back to the Oxboro area specifically, I’d replace the street lights. Due to the width of the streets the one on high poles are necessary to get even illumination on the road, but they could be alternated or supplemented with decorative pedestrian scaled ones like at France Avenue. I’m generally not a fan of the “fake history” lanterns that are so common; the ultimate in ridiculousness is the “acorn” lanterns in front of the Shakopee Walmart. My personal preference would be something attractive but contemporary. And I’d extend the boulevard trees to both sides from 95th to the end of the commercial area, and the freeway to Nicollet Avenue.

Flashing Yellow Arrows would be implemented at all the signalized intersections. Pedestrian recall (The walk light always goes on without having to push a button when vehicles have the green) would be possible across some of the minor legs of the intersections, like the shopping center driveway or 95th Street. Of course all the signals would get ADA compliant push-buttons. Also nice would be a signal at 102nd and Lyndale–it’s hard to make a left turn out of the intersection at rush hour, maybe even a pedestrian overpass at 102nd St over I-35W.

Obviously this would take out the park and ride and Clover Center. To replace it, I propose to redevelop Clover Center and Freeway Ford with structured parking, market rate apartments, and a small amount of retail. The northbound Orange Line station would be integrated here, with a pedestrian bridge along the railroad tracks. Maybe that drive thru coffee shop could go here and also serve commuters. The bank might be able to stay, or maybe not–notice I’ve maintained two auxiliary lanes due the short distance between the new ramp and Lyndale, shifting things north. But I am thinking bigger for this corner. 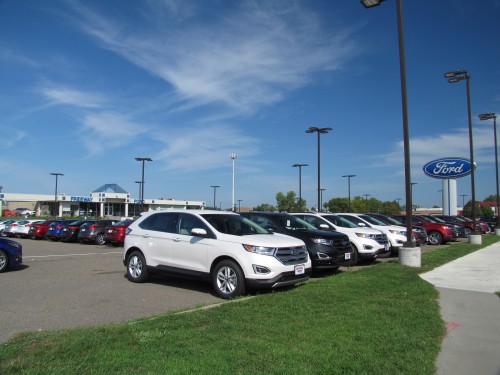 Also of note, the former SuperAmerica headquarters, now a storage facility, (the white building in the lower center) might be a place to think about redevelopment too. It might not seem like a great place to live, surrounded by a wide suburban style road, a freeway interchange, and a railroad, but keep in mind there are apartments now in what is basically the Southdale parking lot, and this would be right across the new pedestrian bridge from the Orange Line stop. Or the park and ride facility could go here and needn’t be incorporated into the Clover Center redevelopment.

What’s Not Going to Change

In case it’s not obvious by now, the fact that probably 95% of the people either drive to or through the neighborhood, so it will stay reasonably friendly to motorists. I haven’t mentioned the strip malls, fast food, banks, and whatnot. I wouldn’t mind limiting low density detached commercial to of 95th Street. Nor would I necessarily be opposed to eventual redevelopment of the strip malls with parking in back–it doesn’t matter to me if I park in front or back of the Subway or Chinese takeout. The issue is that it’s difficult to configure a business to have both front and back entrances, and the strip malls provide affordable rents for a variety of stores. If the area was all redeveloped at once, there’d be too much high-end retail space and not enough low-end; after all this is not a highbrow area, as Byerly’s found out. An advantage is that there’d be fewer driveways crossing the Lyndale Avenue cycletracks.

So is all of this going to happen? No. Obviously this is just my fantasy, which differs from how Bloomington likes to do things. So far, the city hasn’t been receptive to my feedback about more minor issues so I might as well suggest that they allow a toxic waste dump next to city hall. But, I can dream that these auxiliary lanes get used more productively as something else.

5 thoughts on “Bloomington’s Oxboro Neighborhood, a Vision for the Future”