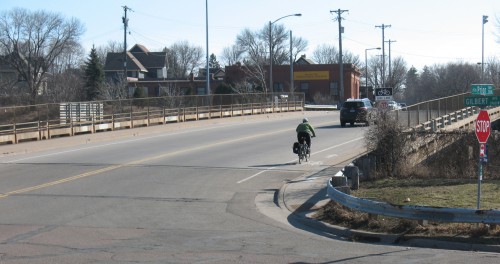 Prior Avenue North of I-94, looking south across the overpass

If you’re riding a bicycle north or south in Saint Paul, Prior Avenue is one of the only nice ways to cross Interstate 94 and the Canadian Pacific rail line. There are several reasons for this. It has lower volumes of motor vehicles than many other streets and cars tend to drive slower. It’s more direct than some of the other routes and feels safer from crime, even at night. Best of all, it crosses the Freeway and CP Rail line on a level grade, so cyclists don’t have to go up any hills. For all these reasons, Prior is a very popular north-south bicycle route. In recognition of this, the city designated it a bikeway and, two years ago, striped bike lanes on it north of Marshall.

Compare Prior to some of the alternatives. Fairview Avenue descends precipitously under the freeway and CP Rail lines. The road surface at the bottom of this plunge is often flooded and forms a secluded underpass that is dark and creepy at night. If you elect to go on the sidewalks, you’re hemmed in by chain link fences and have little room to maneuver. If you go in the street, you have to ride next to high-speed, higher-volume car traffic, with bad sight lines and no bike lanes. Either way, you have to ride up a decent sized hill. The Aldine Bike and Pedestrian Bridge is narrow, secluded and indirect, requiring cutting back and forth through a couple of semi-industrial streets on the south side of the highway. The Snelling Avenue overpass is horrible, as is Cretin Avenue. Both have freeway ramps, six and eight lanes of high-speed traffic, and no bicycle accommodations.

Were it not for a priest and a large group of dedicated community activists, Prior Avenue might look a lot like Snelling and Cretin. From 1959 until 1962, these folks fought a huge battle with MnDOT’s predecessor “The Minnesota Department of Highways” to block freeway ramps at Prior. The story of this battle was featured in the Winter 2013 issue of Ramsey County History— a publication of the Ramsey County Historical Society. “Preserving a ‘Fine Residential District’: The Merriam Park Freeway Fight” is a superbly researched and well written story and I highly recommend that everyone read it. Ramsey County History does not put the full text of its articles online. So I obtained permission from the Historical Society and the article’s two authors Tom O’Connell and Tom Beer to post a PDF version for download.

The article goes into the history of Interstate 94, Merriam Park, and many of the players in the Prior Avenue fight. The community campaign was one of the first neighborhood efforts to resist a freeway in Saint Paul and one of the only ones to succeed. Reading the article, one is struck by what it took to stop this one little interchange. Community organizers needed strong support from an archbishop, prominent federal politicians like Hubert Humphrey and Eugene McCarthy, and tactics like lining up 1,500 children along Prior Avenue from Saint Marks School, five blocks to the proposed freeway ramps in a protest that helped galvanize the neighborhood. Even with all this, the highway department refused to budge. They backed down only after three years of high-level, open political warfare. That’s how powerful highway agencies are.

After my last streets.mn post about Snelling Avenue a few people asked me what I thought was needed to force MnDOT to improve Snelling for cyclists and pedestrians. Certainly we can pressure the legislature and governor to force MnDOT and local Public Works Departments to stop using “Level of Service” (for cars) as their most important street and road design metric (something that California just accomplished). We can also demand that cities and towns be given more ability to lower posted speed limits. However, when it comes to actually getting promised pedestrian and bicycle accommodations or stopping an Ayd Mill freeway, “The Merriam Park Freeway Fight” highlights what it takes to win– a mass mobilization of people and politicians, great organization and a willingness to spend years fighting for what you want. That’s an important lesson for politics and life. 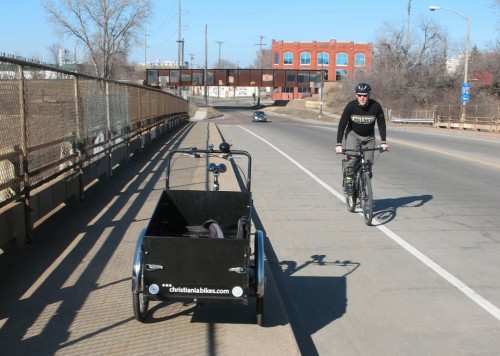 Looking north on the Prior Avenue Overpass towards the CP Rail Bridge. 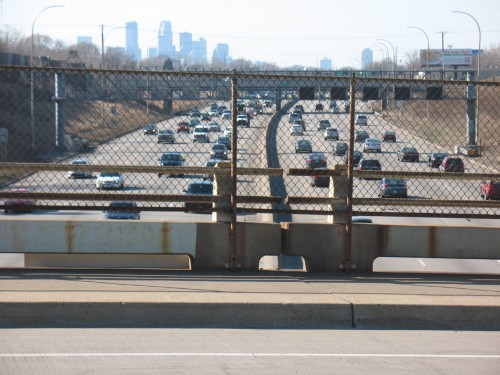 The view west from the Prior Avenue overpass

12 thoughts on “Prior Avenue and the Merriam Park Freeway Fight”