The Construction Programs of the 1920s

Previously, Part 1 of this series discussed some early roads in Minnesota’s pioneer era and the privately maintained auto trails in the early motoring era. Part 2 discussed the generation-long ramp-up of state involvement in highway construction, culminating with the inauguration of a system both owned and maintained by the state: the trunk highways. 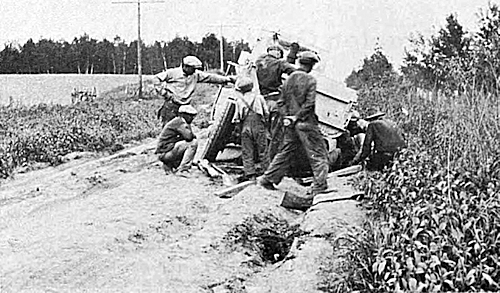 They now existed on paper, and you could follow well-marked signs in the field. However most of them were little more than dirt paths like the roads of the previous three generations.

At the start so few highways were paved that mapmakers didn’t even bother with a special symbol. 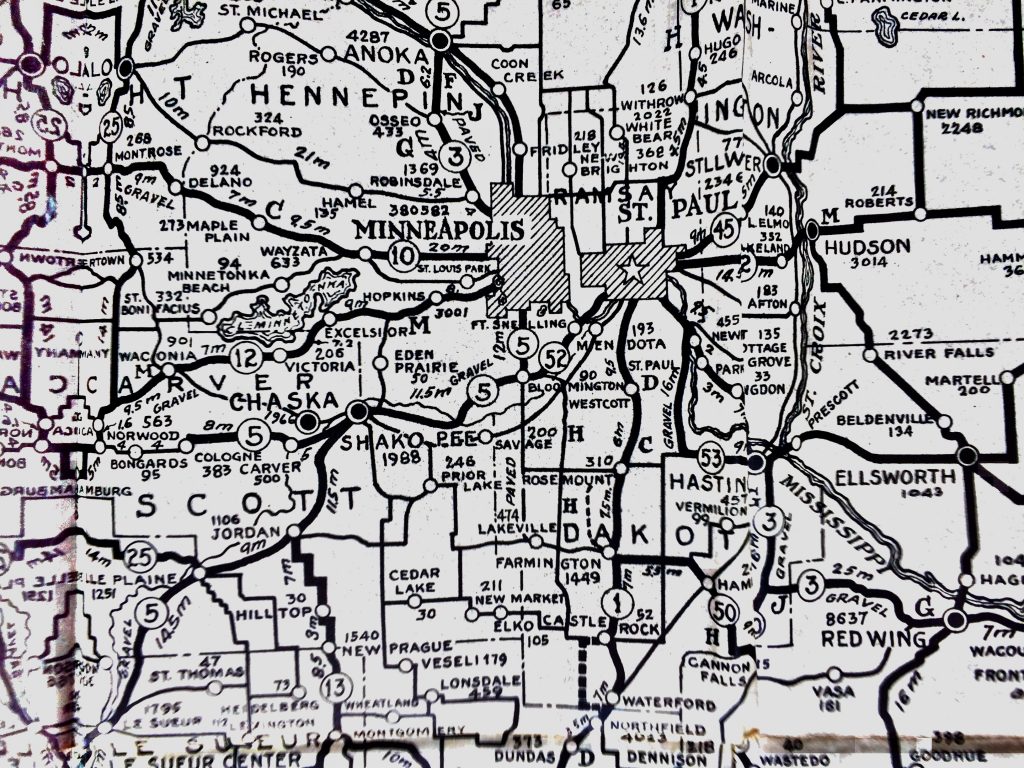 When roads started to be paved they initially just noted it in text on the map before moving to solid lines for paved, dashed for gravel and earth. In the early days only concrete was considered “real” pavement, and the official Minnesota maps differentiated between concrete and the paper-thin coatings of asphalt by solid lines vs alternating solid and dashed. Interesting enough this distinction between “Pavement” and Bituminous” on official state maps continued on, although much blurred, as “High Type” and “Intermediate Type” until the 1990 edition.

Early on the MHD published “Condition Report” maps. These were pretty useless for navigation, rather they were to show off progress in improving the trunk highway system. 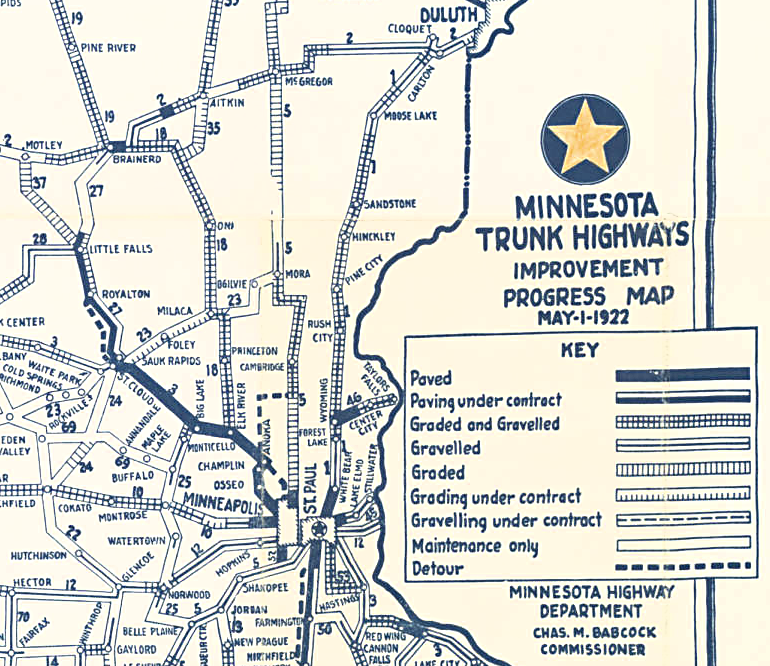 Early pavement consisted of a pair of 9 foot traffic lanes with no shoulders. This was obviously an improvement over a single 9 foot lane or no pavement at all, and acceptable when the bulk of America’s freight still moved by rail and traffic volumes were light. 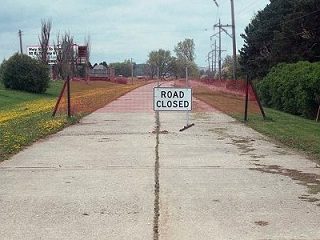 Abandoned section of US 52 at Zumbrota

But as a motorist you still warily surveyed any oncoming vehicle for any tendency towards drifting or road-hogging. Soon the standards increased to 10 feet, then eventually to today’s standard of 12 feet.. Most of the early narrow pavement has long since been torn up or buried under asphalt, but there are some segments still visible, serving as local access roads or else completely abandoned when the main highway was realigned.

A few major bridges of the later part of this 1920s construction boom remain with us too- The Mendota Bridge, the Ferry Street Bridge, the 10th Ave bridge, the beautifully restored Holmes Street bridge to name a few. 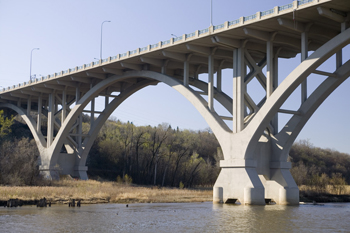 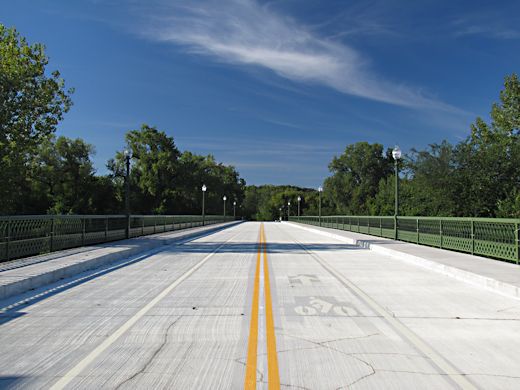 The Coming of the U.S. Numbered Routes

The previous article shifted focus from the federal involvement to the state government involvement, and the formation of the trunk highway system. But The federal government never went away and went beyond just cutting checks.  In 1893 the Office of Road Inquiry, the predecessor organization to today’s Federal Highway Administration (FHWA) was formed. The problem with state route markings is that they would usually change numbers abruptly at the state line (the situation on Minnesota’s southern border is unique since Iowa changed all of their numbers to match neighboring states in the 1960s). The concept of a nationwide system with consistent numbers and it’s own branding debuted: The U.S. Highway System. 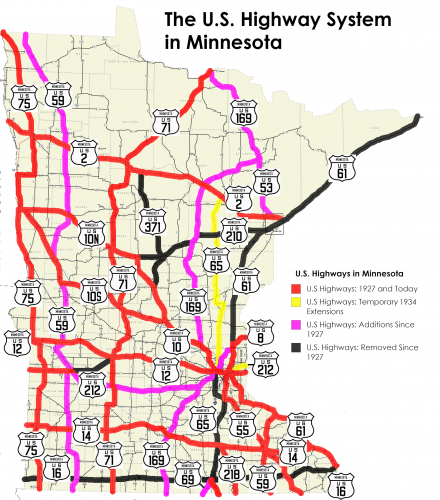 Some things on the map to note: 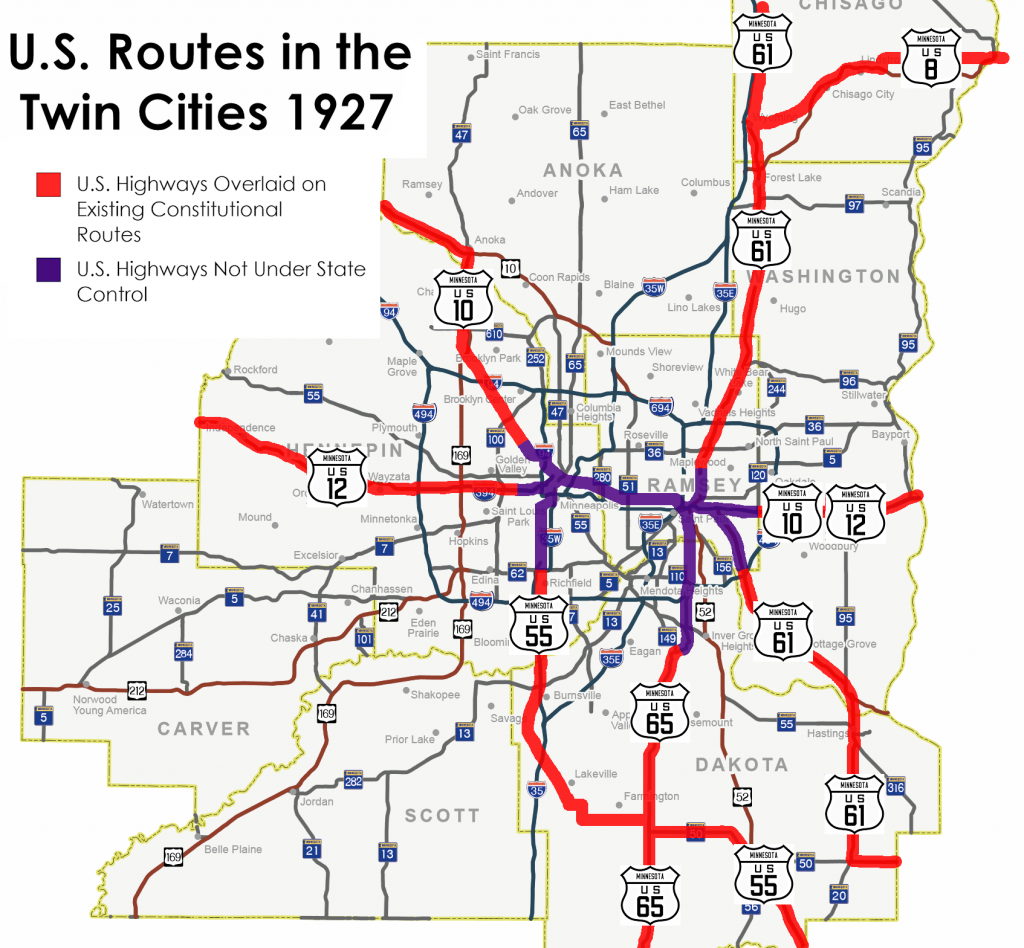 The initial system in the metro

This is recognizable, and yet not. We see US 12 and US 169, but US 65 goes to St. Paul rather than Minneapolis. For something more recognizable, lets temporarily jump ahead to the U.S. system at it’s height in 1934 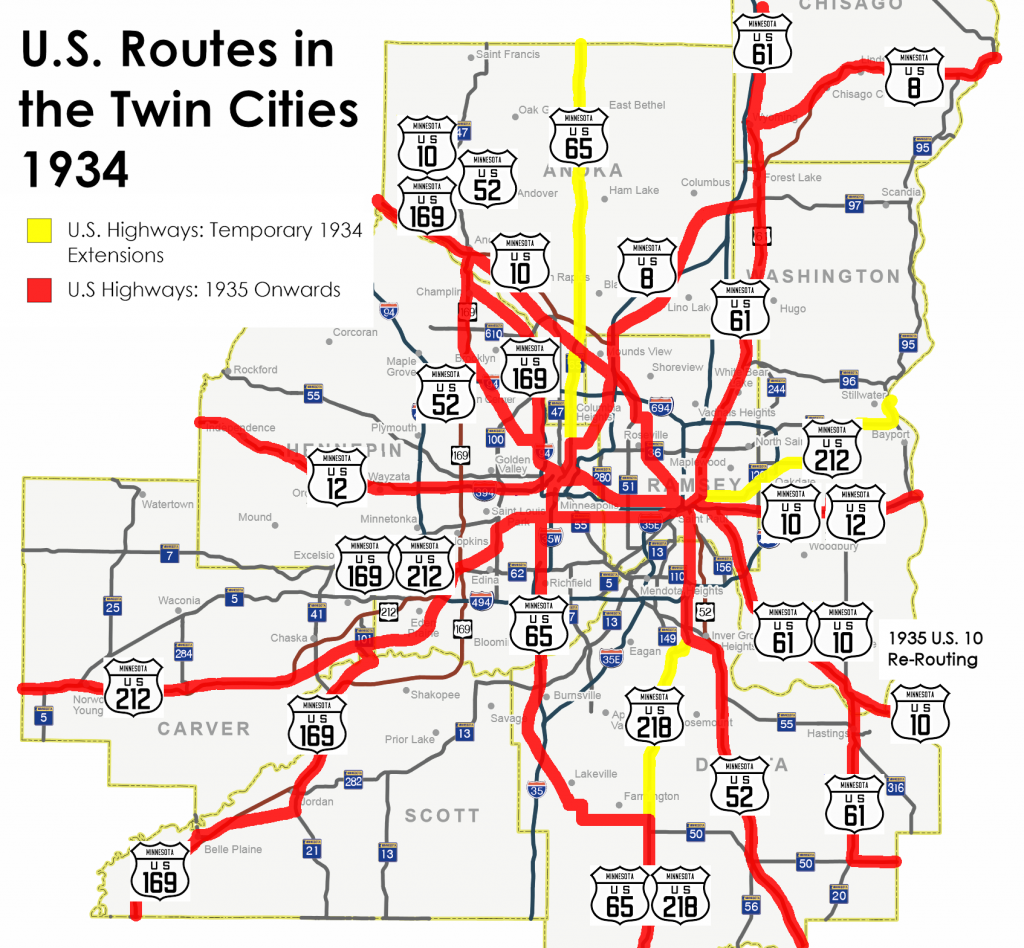 Some things on the map to note:

It should be mentioned that contrary to popular belief, US Highways are not owned by the federal government, nor do they get special funding. They’re just state routes with a national marker on, used with approval of the Federal Highway Administration (FHWA). There is a system of routes that qualifies for extra federal funding today, called the National Highway System (NHS), but it has no special marker. All interstates are NHS, as are many US routes. But some state and even county routes are also NHS, and many US routes, especially in the north and west parts of the state, are not.

The federal government has never owned any highway. Their role has always been collecting federal taxes and directing funds at states that can’t afford their highways by themselves, like the Dakotas, and projects that have nationwide significance. We talk about the Manual of Uniform Traffic Control Devices (the MUTCD) here a lot; ensuring national standards in traffic control is another federal role so we don’t say stumble on a pink square flashing light in rural Iowa and wonder what it means. But now back to discussion on Minnesota.

The End of the Auto Trails

With the implementation of state maintained trunk highways, the private association marked auto trails discussed in the last part faded away. Some legacies survive. U.S. 75 is the “King of Trails Scenic Byway”.

North and south of Osseo the former routing maintains the street name “Jefferson Highway”. And “Yellowstone Trail” is a city street name south of Lake Minnetonka.

U.S. 14 has some nice new “Black and Yellow Trail” signs.

And as a coda to the auto trails era, there’s a nice marker where the Jefferson Highway crossed the Iowa border. 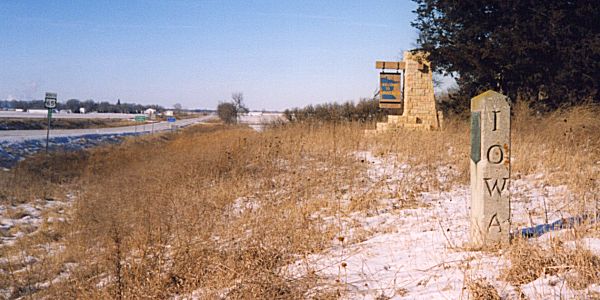 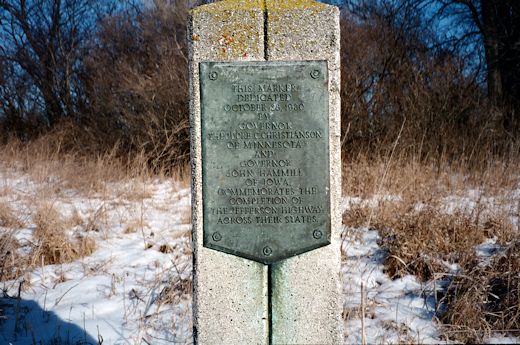 This marker, dedicated October 28, 1930 by Minnesota Governor Theodore Christianson and Iowa Governor John Hamill commemorates the completion of the Jefferson Highway across their states.

In the background is a 1930s historic entrance monument. Part Three will look at the dramatic changes to Minnesota’s Highways in the 1930s.

5 thoughts on “A History of Minnesota’s Highways: Part Three”