Dealing with a driver shortage, and a budget deficit

Few people set out to be bus drivers. They select the job because the pay and benefits are good, even though the working hours tend to be inconvenient. So when unemployment is low, Metro Transit has difficulty recruiting enough drivers to offset retirements, let alone grow the system.

This summer 20 rush hour buses were added on under-construction I-35W to lure frustrated auto commuters. All these factors combined during the summer to put Metro Transit in a hole. For the first time in a long time, Metro Transit found itself 90 drivers short and unable to routinely fill all its work, despite extensive efforts to recruit new drivers.

The usual answer to driver shortages is to add overtime, but there’s not enough overtime available to to offset that kind of shortfall. The result was a twice-a-day scramble to cover the rush hour, and trips were lost daily with no opportunity to warn regular commuters their bus would be missing.

In August Metro Transit took the unprecedented step of temporarily suspending about 65 rush hour trips per day, so at least the customers would know what to expect.

That ends December 1st, when the new quarterly schedule change goes in. By then, Metro Transit will have reduced the driver deficit to about 20. It has increased the driver count by 30, while reducing the amount of service by about 50 drivers.

Within the service changes are two big counter-currents. First, the 60+ suspended rush hour trips were reinstated. All those trips had good ridership when they were suspended, so hopefully those riders will return.

To offset those reinstatements, something had to go, so Metro Transit finally took the axe to a series of longstanding weak performers, selectively pruned the rush hour expresses, and made a surprising cut to one of its heaviest routes.

It should also be emphasized that the cuts are required to deal with a looming budget deficit, thanks to an anti-transit legislature.

Cutting the weak performers
Route 16, the University Avenue local, was dramatically shortened and the service downgraded when the Green Line opened. It continued to provide half-hourly frequency from downtown St. Paul to 27th Avenue SE in Minneapolis. Now it has been cut back to Fairview Avenue in St. Paul. There was little ridership west of there and Route 67 covers most of the vacated portion.

Route 67 West Minnehaha (St. Paul) itself has always been weak, especially the portion in Minneapolis that passes through Prospect Park and terminates at the Blue Line Franklin Station. Prior to 2014, this was the Route 8 shuttle, probably the poorest performer in the Metro Transit system. As part of the Green Line opening it became part of an extended Route 67. Ridership has risen, but not enough, so weekday rush hour, night and weekend service is being reduced.

Route 84, the half-hourly Snelling Avenue local, will no longer reach Rosedale. It has been cut back to Midway Parkway, just north of Como Avenue. The A Line BRT took almost all the ridership north of there and the redundancy was obvious. This will also eliminate bus overcrowding at the Rosedale Transit Center.

Not a surprise, but something of a shock nonetheless is the discontinuance of midday service on St. Clair Avenue in St. Paul. Route 70 west of downtown had been down to an hourly midday schedule for years, but this is still the first time that an all-day urban local route has been made rush hour only since it happened to the Kenwood line decades ago.

Trimming Expresses
The 35W surge included pre-6 AM arrivals on most expresses. The ridership simply didn’t appear, so those were easy cuts.

Express ridership has been trending down for a couple of years, so some trimming has occurred. About 20 rush hour express and limited stop trips have been eliminated.

Less service for Route 21
One of the busiest routes in the system, the 21 Selby-Lake, was one of only two (with Route 18 Nicollet Avenue) to still boast a 7.5-minute midday frequency. 7.5-minute service only happens when demand requires it. Route 5 Chicago-Fremont used to have it, but was dropped to every 10 minutes. That also happened to Route 16 University Avenue a few years before the Green Line debut. Now the 21 is also every 10 minutes on weekdays. Because only half the buses continue to downtown St. Paul, the St. Paul frequency drops from every 15 to every 20 minutes.

This change saves a lot of money. The question is whether a bus every 10 minutes can handle the load. More than most lines, the 21 is subject to bus bunching due to traffic congestion.

Franklin Crosstown stop spacing
For some time there has been a debate in the Streets.mn comment section on bus stop spacing. The Metro Transit standard for a local route is 8 stops per mile. On routes where buses stop every block to handle passengers, this can get pretty slow and laborious. Metro Transit’s answer has been to overlay an arterial BRT that stops every half mile. That way local stops are preserved for anyone with mobility issues, or just not wanting to walk a quarter mile to catch the BRT.

Route 2 Franklin Crosstown is heavily patronized and very slow. No BRT has been proposed for this corridor, but something needed to be done to speed things up, so Metro Transit has widened the stop spacing to 4 per mile. So far the scheduled end to end running time has not been changed, because on-time performance wasn’t great with the old stop spacing.

Traffic signal priority for buses is proposed for the future. It will be interesting to see if the schedule can be tightened, if on-time performance improves, and if there is any customer backlash because of the missing stops.

Northstar on-time performance
Metro Transit staff recently gave a report to the Met Council that shows the strong correlation between Northstar commuter rail on-time performance and ridership. Although the scales of the two charts are slightly different, they show how ridership grew, then dipped during 2014 when BNSF’s congestion issues messed up the commuter trains.

Note that since 2015, with one minor exception, on-time performance has been higher than ever. That said, it took riders a couple of years to trust the service again. Then along came a smaller on-time dip and ridership tailed off slightly. 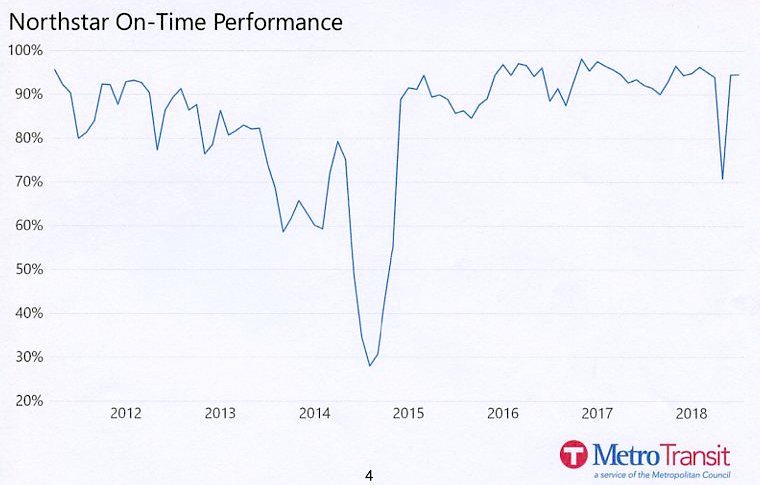 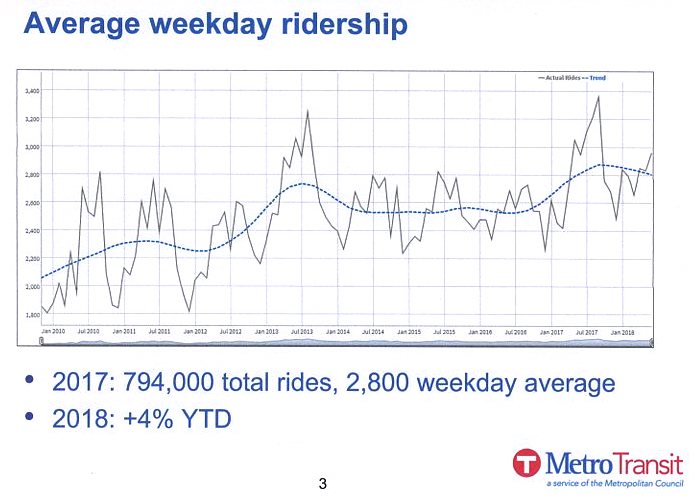