Last week’s article calling for a ban on slip lanes in Saint Paul is spot on. Too many of our city streets are built like highways, endangering pedestrians and bicyclists by design. The comments on the article, however, turned toward pedestrian bridges, in particular the bridge at Aldine over I-94, as an alternative to walking across intersections like Snelling & I-94.

Now, setting aside the fact that crossing the Aldine bridge would be an extra half mile of walking, it’s worthwhile to consider that the experience of walking or biking across this particular bridge is far from ideal. In fact, I would rate the Aldine ped bridge as the 5th worst in the Twin Cities. So, here’s my opinion on the best and worst ped bridges in MSP. Along the way, let’s talk about how to make our bridges better. 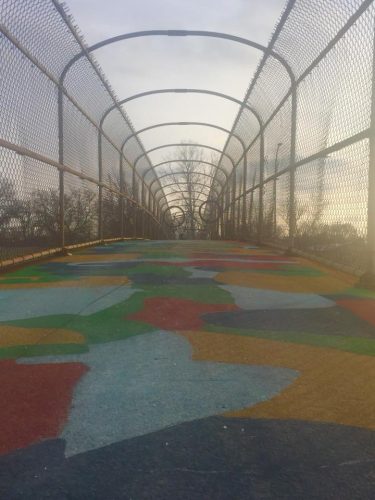 The Aldine ped bridge shares a lot of features with lots of other bridges throughout MSP that were built in the 60s and 70s–a narrow arched concrete span caged in with chain link fence. Crossing these things feels precarious, as if you’re being chased by a Balrog across a pit of high speed doom.

What sets Aldine apart is the steep ramps on either side, particularly the south side where visibility is limited and the path dumps straight out onto Concordia Avenue. Luckily, Concordia is a dead end here, but the design of the ramp puts a descending bicyclist directly into the traffic lanes. Like many places, it’s an accident waiting to happen.

Also, although Aldine is ramped, it is far too steep for current ADA standards.

Personally, I am quite fond of the Aldine bridge, especially since the neighborhood painted a mural on its deck. I like it because it’s hard to find and feels like a secret passageway–not exactly positive qualities in a structure built to serve the public. Clearly, the neighborhood deserves an update similar to the newer bridges crossing I-94 at Mackubin, Chatsworth. and Griggs.

Built in 1927, the Montreal Avenue bridge doesn’t really connect neighborhoods or help anyone’s commute, but crossing it is an experience worth going out of your way for. Its art deco style and lamps are great, but the view of the river valley below is spectacular. 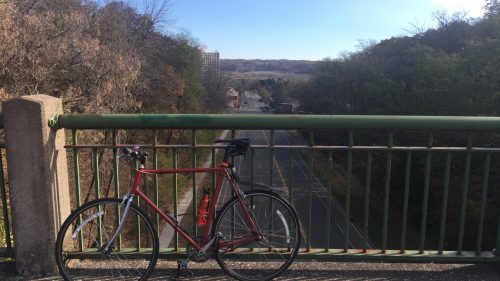 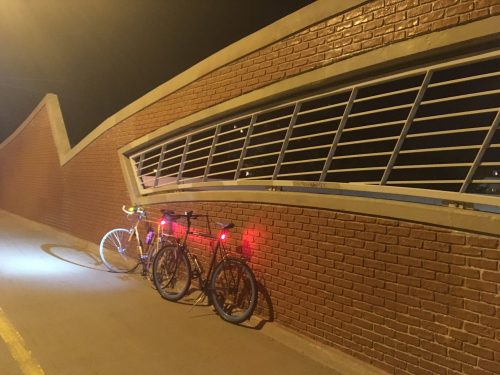 There’s a lot to see and a lot of roads to cross between Uptown and Downtown Minneapolis. Which is why it baffles me that we built this switched-back bridge with opaque zig zag brick walls that only crosses Lyndale ave and leaves bikers and pedestrians to fend for themselves crossing the freeway offramp one block north. Perhaps if the view of the surrounding architecture weren’t completely obstructed, crossing this bridge might be more enjoyable. As it is, it’s a disappointment. 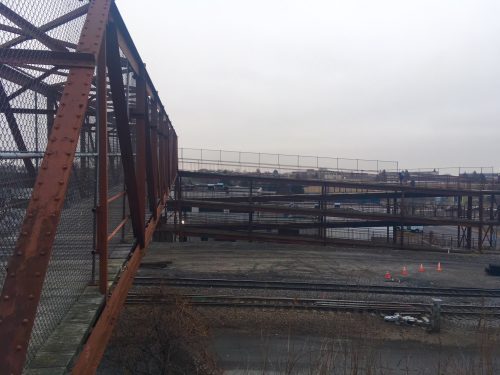 Another switchback bridge, the Hamline Avenue bridge is a rusty old piece of steampunk charm over JJ Hill’s Great Northern Railroad. Yes, you have to walk or bike FIVE times farther on those stacked switchbacks, but it feels right, almost meditative, like a labyrinth. My kids and I go this way when we bike to Como Park and it’s definitely a highlight of the trip. Which leads us to the 3rd worst bridge…

3rd Worst – No Crossing at Hamline and Jessamine 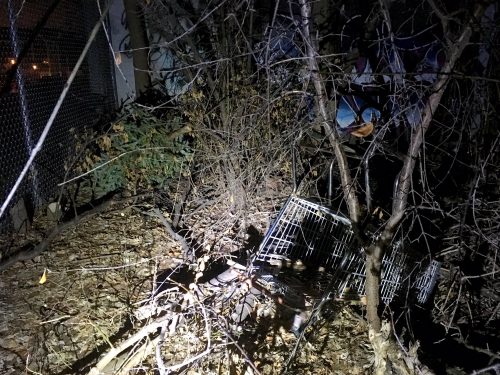 You can dump crap here, but you shall not pass. Hamline at Jessamine

Once you’ve crossed the Great Northern tracks, wouldn’t it be nice to continue northward across the next set of tracks north of Energy Park? Nope, there’s a diligently maintained eight foot fence littered with garbage barring your way.

Instead, you can choose to go a full mile out of your way to cross at Lexington or Snelling (strike that–Snelling is completely unfit for either walking or biking).

As a result, the entire Midway neighborhood has only two paths northward to Roseville, Como Park, and the State Fair: Raymond Avenue or Lexington Avenue, 2 1/2 miles apart. The fact that this situation has persisted through the decades, through the urban renewal project of Energy Park and Bandana Square, demonstrates a profound a lack of leadership. 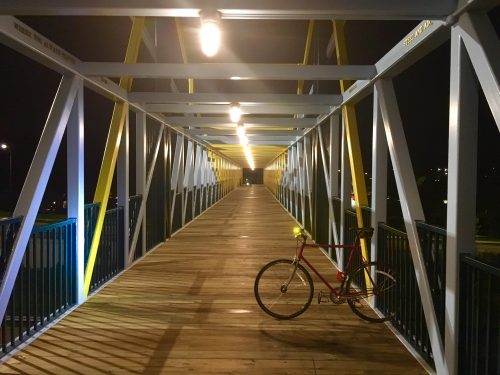 This newly refurbished bridge is absolutely stunning. Designed by artist Siah Armajani, the bridge makes crossing I-94 feel like an event. It’s designed to be special, a fact which perhaps highlights just how blasé most of our other bridges are.

In fact, the following quote from the StarTribune emphasizes perfectly how engineers tend to separate form from function, often at the public’s expense:

This structure is not necessarily about the utility but about the form and what it does for the user experience,” said MnDOT project manager Christian Hoberg. “It was a new experience for me — I’ve always been very utilitarian and bare bones. This is a bridge that’s more than a bridge — it’s art. 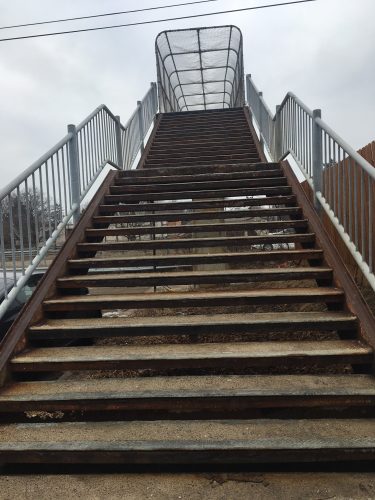 When a bridge is so rusted that you can see through the beams supporting the steps, should you cross it? Sure, why not? First, suppress your mounting sense of vertigo and start climbing the impossibly steep wall of stairs. Then, don’t look down as you scuttle across the humped caged span to the other side, where you’re met with another set of steep stairs going down. Let’s hope there’s no ice here!

What’s more, the sidewalk on the eastern end of this hulking monstrosity is so pitched and potted it deserves a little interpretive sign describing the freeze/thaw process.

The western side has a nice little bike trail. Good luck carrying your bike over that bridge, tho.

Connecting the U of M with downtown, the Dinkytown Greenway Bridge is not only practical but beautiful. In fact, it offers the single best view of Minneapolis available anywhere. And, you can only see it by bike or on foot (although I did once encounter a very lost car driver crossing it. I’m not sure how he managed to get there, but he claimed to be from out of town, by which I think he meant drunk. He crossed three times before finding his way out of the network of tiny streets.) 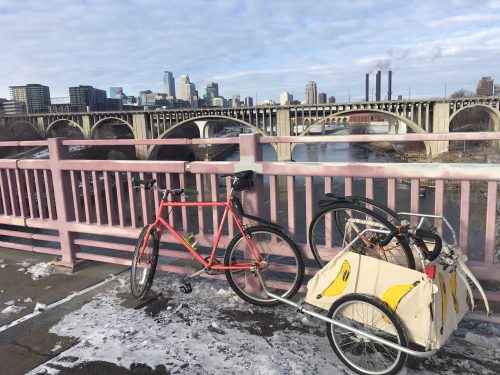 Formerly a railroad bridge known as Bridge Number Nine, the Dinkytown Greenway bridge is truly one of the jewels of Minneapolis’ bike and pedestrian infrastructure.

Located one block west of Fairview across the old Ford Plant’s train tracks, this bridge is the absolute worst. Like, if Goosebumps did a story about an evil bridge that stomps around threatening children, it would totally be this bridge. 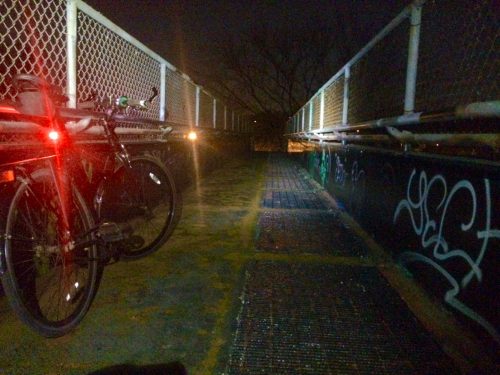 Rusty to the point of seeing daylight through its steel deck, this bridge was built decades ago to help Highland Park kids cross the tracks to get to school, a purpose which has now been obsolete for over a decade.

Impossibly steep, the stairs to this crossing rise out of the back yard of a little 50s Cape Cod house at the end of Field Avenue and descends to a cracked and overgrown sidewalk south of Worcester Avenue. Serving absolutely no purpose, why this bridge wasn’t scrapped years ago is hard to understand. 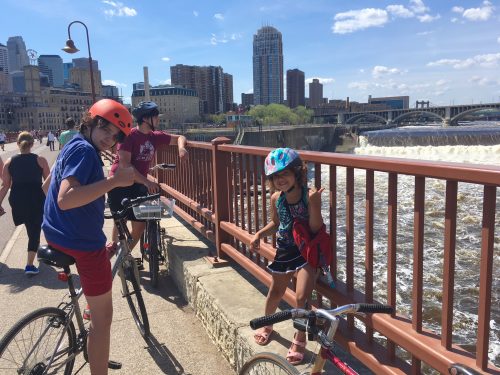 What else could it be? When I was a kid, my dad snuck us past the fencing to show me the abandoned Stone Arch Bridge. Now, it’s the destination of choice when my kids and I go biking.

JJ Hill’s folly is the closest thing Minneapolis has to a promenade. On a nice day, it’s packed full of locals and tourists just taking in the sights. On a cold night, it’s still got people crossing it just for fun.

Last summer, we biked past a wedding taking place mid-bridge. A couple weeks ago, during a snowstorm, my son and I helped some college kids build a giant snowman. 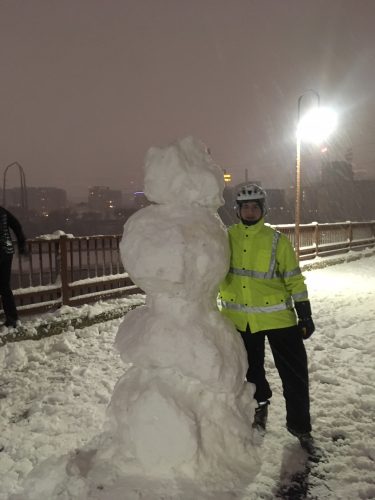 Indeed, the Stone Arch may be the best tourist attraction in Minneapolis–not bad for a pedestrian bridge. Over 1,700 bicyclists and over 3,700 pedestrians cross it daily (based on weekday counts during September). It’s become a symbol of Minneapolis itself.

Its popularity certainly argues well for investing in additional pedestrian and bicycle projects like the Greenway extension across the Mississippi into Saint Paul. Pedestrian bridges, when built well, help create community and connect neighborhoods. And, they offer ways to experience our Twin Cities in ways unavailable to motorists.

Dishonorable Mention – The Penn Avenue Bridge Along I-394, Minneapolis

This bridge runs parallel with 394 from Penn Avenue then drops down a spiral to…where? It basically goes right back to Bryn Mawr where it started but doesn’t connect to the Cedar Lake Trail, which is just across a pair of train tracks. Luckily, there’s no fence and a well-worn path to get you there. But c’mon–can’t we figure out stuff like this?

I’m sure Sabo would top many lists of the best ped bridges in town. It looks great, has cool lights, and there’s often people to meet hanging out on it. But, as part of the Midtown Greenway, it’s mildly annoying to jog a full block north and climb a hill when you could wait for the light and cross at 28th. Depends on how much you trust drivers to stop at red lights.