I’ve known about Route 614 and its low ridership for a few years, and I didn’t expect the route to survive this long. I’ve wanted to try this route, and with its possible elimination now was the time to try it.

I arrived at Ridgedale Mall on Route 645 from Minneapolis, and with 50 minutes before the 614 would depart I went inside to stay warm and kill time. When the time came the small Ford minibus pulled up to the curb and one other passenger and I boarded. I overheard the other passenger mention to the bus driver that this was her first time taking this route. Just south of Highway 7 on County Road 101 the other passenger got off and walked down a side street. A little while later we pulled into the Minnetonka Heights apartment complex that marked the southern terminus, and about five minutes later we headed back north. A person stood on a snowbank next to the bus stop for Highway 7 & County Road 101, and proceeding to board she nearly slipped on the ice along the curb. Then another rider got on just north of Highway 7 & County Road 101 with a bag of groceries, and a short time later that passenger got off. At Minnetonka Boulevard & Williston Road three riders got on, and all of us got off at Ridgedale Mall. About 15 minutes later the eastbound Route 645 bus arrived and I headed back home. 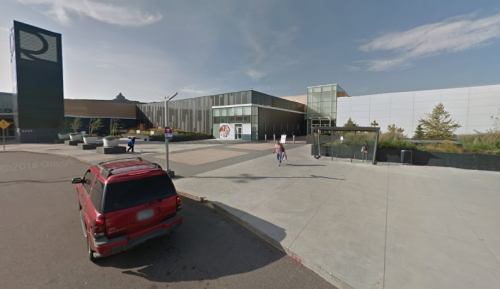 Above: The bus stop for Ridgedale Mall. While waiting for the bus outside in the summer can be pleasant, during the winter there were a few people including myself waiting inside the entrance to the mall before our buses arrived.

Route 614’s potential elimination made it onto the Star Tribune, and Metropolitan Council member Jennifer Munt said “we’ve tried everything to keep this route alive.” That includes handing out free ride passes and marketing the route. What else they have tried I don’t know, but perhaps instead of phrasing it as “tried everything” it should be phrased more as they tried as much as they wanted to do to keep this underperforming suburban local route alive. Obviously Route 614 is nowhere near the most important route in the transit system, and saving it appears to not be a high priority. However before cutting this route, I think it’s important to study what its strengths and weaknesses are, and how those weaknesses can change.

While Route 614 may appear to have only weaknesses, it does have strengths despite being a short and infrequent local route in a low density and car-centric area. It serves a few areas that can attract riders; Ridgedale Mall and the southern area around the mall, the 7-Hi shopping complex at Highway 7 & County Road 101, a few affordable housing complexes at the southern terminus, Minnetonka City Hall, and a small light-industrial area near Minnetonka Boulevard & Williston Road. For recreation Route 614 can take you to the Lake Minnetonka LRT Regional Trail.

For weaknesses there are several including the obvious low-density and car-centric area it serves. The area also has many affluent residents who likely would not take the bus (though they can feel free to prove me wrong). There are many segments along the route with no sidewalk, so riders have to walk through grass, mud, or in winter snow as I saw one rider do. The last mile issue certainly applies to Route 614 as besides Ridgedale Mall most areas require walking at least two city blocks. In some instances riders must walk through a sea of parking to reach actual destinations.

While frequency isn’t the best, it’s appropriate for this type of route. However, the frequency isn’t exactly one hour; for example the northbound schedule shows the second bus of the day leaving 46 minutes after the first, then 1 hour 9 minutes, 1 hour 4 minutes, etc. Having a frequency of exactly one hour can help potential riders better understand the schedule and feel more confident in trying the bus. The span of service should also be at least two hours later for evening commuters.

Most important for Route 614 is the schedule, which needs to be timed for convenient transfers at Ridgedale Mall to/from Route 645, the limited-stop service along the I-394 Corridor between Minneapolis and Wayzata with limited service further west to/from Mound.

Transfers from Route 614 to westbound Route 645 operating to Wayzata Park & Ride or Mound:

The early morning connections are long, then become reasonable, and then in the afternoon are tight but doable. The last connection of the evening is a slightly long wait.

Transfers from Route 614 to eastbound Route 645:

Transfers from westbound Route 645 to Route 614:

Transfers from eastbound Route 645 coming from Wayzata Park & Ride or Mound to Route 614:

The main priority is to have convenient transfers from northbound 614 to eastbound 645, and from westbound 645 to southbound 614. The current schedule doesn’t fully achieve that goal, and the 614 schedule should be changed to have better connectivity with the 645. While the 614 frequency would not be exactly one hour as recommended above, having a convenient transfer is more important. Increasing the frequency of the 645 and in the long term having rapid transit along the I-394 Corridor would allow convenient transfer to/from all Route 614 departures/arrivals.

To save Route 614 and attract significantly more riders there needs to be much better pedestrian infrastructure along the route. This would not only provide better accessibility to Route 614, but also make the area along the route more walkable.

Along County Road 101 between Hutchins Drive and Highway 7 a sidewalk is needed on the east side of the road (this is the area where the one passenger had to stand on a snowbank and nearly slipped on the ice boarding the bus). The new sidewalk should continue north to Cub Foods where it would connect with an existing sidewalk. Continuing north, a new sidewalk is needed along the west side of County Road 101 between Ridgewood Drive and Manor Road.

As is often the case in suburbs and even in parts of the urban core, sidewalks aren’t plowed for a long period after a snowstorm or they aren’t plowed at all. Sidewalks and bus stops need to be cleared to give people confidence in using the bus and keeping existing riders in the winter.

As was already mentioned, some of the areas Route 614 serves have a sea of parking. For routes like this it’s common for buses to pull up to the entrance of a department store or grocery store so riders don’t have to walk a far distance. For the 7-Hi Shopping Center, specifically the Cub Foods and Target, this should be done. While this adds a few turns and a significant amount of time, the purpose of bus routes like Route 614 is accessibility, particularly for the elderly and disabled who depend on public transit but can’t walk long distances. West of Ridgedale Mall Route 614 should also directly serve Lunds & Byerlys among other stores via Ridgedale Drive.

Above: Westbound Route 539 pulls up to the Cub Foods in West Bloomington. This is one of several examples in the Bloomington and Edina area of suburban local buses driving through the sea of parking to directly serve destinations.

Route 614 ends at the border with Eden Prairie, and could easily be extended south to serve Eden Prairie Center and Southwest Station (the Eden Prairie transit hub for opt-out operator SouthWest Transit). Route 614 would then serve major destinations at both ends instead of ending at apartments. This would have no negative impact on SouthWest Transit’s operations as their focus is express service to Downtown Minneapolis. Extending Route 614 could actually benefit them with more connecting riders to/from their express bus routes. For this extension there would need to be additional buses and drivers, bus stop signs installed in Eden Prairie, and marketing the route. Between Townline Road/Highway 62 and Southwest Station the proposed route for this extension currently has three eastbound and four westbound express bus trips between Eden Prairie and Downtown Minneapolis.

Route 614 can be saved, and for the purpose of making suburbs a little more accessible via transit I believe it should be saved and at the very least the sidewalk improvements should be implemented in the near term. However I do recommend some sort of route extension to Eden Prairie as this would provide a good north-south local service in the west metro and bridge the gap between the operator territories of Metro Transit and SouthWest Transit.

Instead of cutting more routes and service, the Metropolitan Council should be trying to find ways to improve a route before cutting or abandoning it. If Route 614 is cut, it should certainly be brought back when Route 645 receives a frequency increase (every 15 minutes most of the day), which could happen in the near term (within the next 5 years). In the long term (10+ years) rapid transit along the I-394 Corridor should be implemented, and Route 614 would have a much better chance at surviving.