Cars and trucks parked in bike lanes seems like one of those enforcement challenges that isn’t going to get resolved anytime soon.  Even if you bothered to call it in, the offending Uber or UPS or pizza delivery driver would be long gone by the time police arrived.  It seems that keeping bike lanes clear of parked vehicles will ultimately require a shift in mindset, and that is unfortunately going to take time. 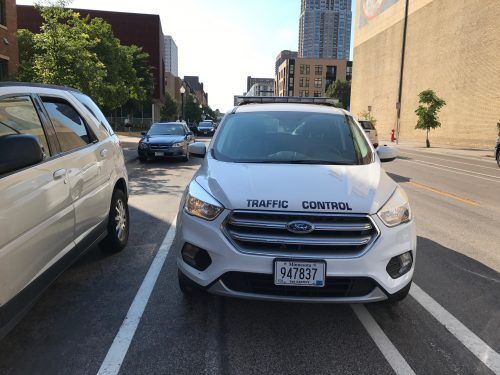 The City of Minneapolis could very quickly and easily eliminate one offender, however, and that is its own Traffic Control Unit.  My commute takes me up and down S. Second St., which has a lot of creeping car traffic during rush hour.   That traffic often includes Traffic Control vehicles, which are sometimes parked in the bike lane while the officer writes a parking ticket.  Putting aside the legalities of this practice, which I will get to in a second, this is mindboggling from a policy perspective: the City puts significant effort and investment into building infrastructure to encourage biking only to block that infrastructure and make biking more dangerous in service of providing car parking.

(a) No person shall stop, stand, or park a vehicle, except when necessary to avoid conflict with other traffic or in compliance with the directions of a police officer or traffic-control device, in any of the following places:

(14) within a bicycle lane, except when posted signs permit parking; or

Interestingly, Minneapolis has an ordinance, Sec. 478.90, that mirrors and expressly cites to Minn. Stat. § 169.34, but the long list of places where that ordinance bans parking does not include bike lanes. The state statute is enforceable in Minneapolis regardless of what Sec. 478.90 says, but its omission of bike lanes is noteworthy.

When I first started encountering Traffic Control vehicles in bike lanes, I submitted a request through Minneapolis 311 asking whether the City had a policy on such vehicles parking in bike lanes.  At that time I was not aware of the statute on the topic.  A City representative called me and told me that Traffic Control vehicles are allowed to park in the bike lane if no parking space is available.  After I later saw a citation to Minn. Stat. § 169.34 on the City’s own website, I contacted 311 again, cited the statute and asked for the legal basis for the City’s policy.  This is the response I received:

We are sorry for any initial misinformation or confusion, but parking or stopping in bike lanes is not allowed per ordinance 169.34.1 subdivision A14 [sic]. We would be glad to enter a service request to Traffic Control if there are any vehicles you would like to report parked in bike lanes.

478.230. – Exceptions.   The provisions of this article, or any other ordinance pertaining to parking or stopping, shall not apply to … authorized traffic code enforcement personnel engaged in performance of their duties.

But this is a city ordinance, and not a statute, and a city cannot simply exempt itself from state law.  After I explained that to the 311 staffer, he put me on hold while he called the City Attorney’s office.  I was not allowed to actually speak with the City Attorney’s office myself and was ultimately told something along the lines of there being a general law enforcement exception to traffic laws.

I haven’t found the legal basis for this exception, or for the notion that it would apply to regulatory personnel writing parking tickets.  But even if that were the case, the decision on whether or not to actually exercise any such “law enforcement exception” would be up to the City.  And this should be an easy one:  If the City is serious about promoting biking, then keeping bike lanes clear of obstructions should take priority over car parking, and City management—or the Council if necessary—should ensure that Traffic Control is not blocking bike lanes while writing parking tickets.

16 thoughts on “Why is Minneapolis Putting Parking Tickets Ahead of Bike Safety?”