When people are asked how a busy street could be made safer, two suggestions always come up. For better or worse these are: put in a stoplight, or put in stop signs. For example, local business representatives recently called for a stoplight on every block of Lyndale Ave S after Ted Ferrara was killed by a driver while crossing Lyndale. In my neighborhood, the situation is no different. The Marcy-Holmes and Beltrami neighborhood associations both demand a stoplight at East Hennepin Ave and 5th Ave SE, in contrast to the modern pedestrian and bike crossing accommodations that Minneapolis and Hennepin County have proposed alongside a road diet of E Hennepin.

However, installing a stoplight on E Hennepin would be a move towards a car-oriented future and limits our right to cross the street. To make meaningful progress on complete streets and climate emergency goals, Hennepin County and Minneapolis must choose a design that prioritizes biking, walking, and rolling ahead of drivers.

East Hennepin to Get a Road Diet

Anyone who has crossed East Hennepin Avenue at 5th Ave SE knows that it’s terrifying. Currently, East Hennepin is four lanes wide with a median traffic speed of 45 MPH, making it extremely dangerous for people crossing at 5th Ave SE to go to businesses like the coffee shop or brewery on Hennepin, or folks crossing to continue on the Presidents Bike Boulevard in Northeast. In December, a neighbor’s dog was killed by a motorist when they were hit in a horrific hit-and-run while crossing here. You can also see some anxiety-inducing moments from streets.mn contributor Jesse Thornsen’s commute at this intersection as well as their ideas to fix it here.

Thankfully, East Hennepin is planned for a resurfacing and road-diet in summer of 2020. The plan is to convert E Hennepin from four lanes to three lanes (two travel lanes plus a center turn lane) between 8th St SE and 10th Ave SE/Johnson St NE, with the addition of buffered, on-street bike lanes. 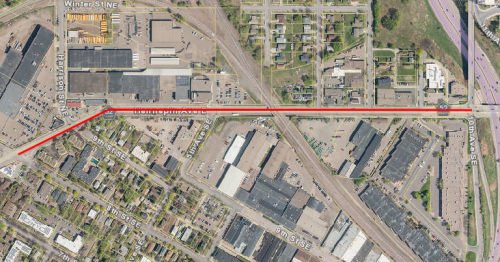 East Hennepin Avenue will be resurfaced from 8th St SE to 10th Ave SE by Hennepin County in Summer 2020.

5th Ave SE is the only marked crossing of East Hennepin for the half mile stretch between 8th St and 10th Ave, and this is also the route along the Presidents Bike Boulevard. Accordingly, the City of Minneapolis is simultaneously improving E Hennepin between 5th Ave SE and Pierce St NE. Where people currently must bike on the Hennepin sidewalk, the City is adding a sidewalk-level bike path. To help people cross E Hennepin, the current flashing yellow beacon will be replaced with more modern rapid rectangular flashing beacons, and the center lane will have a pedestrian refuge median.

Compared to a stop light, this setup is very good thing as it gives people the right-of-way to cross instantly. If you’ve every traveled along streets like 6th Ave SE at University or Washington Ave downtown, you know that poorly timed lights can be a big deterrent to using that route. We often cannot trust Public Works to give people outside of cars priority.

Therefore, this plan sounds like it’ll make traveling by all modes a lot safer, right? As always, neighbors are concerned about traffic. 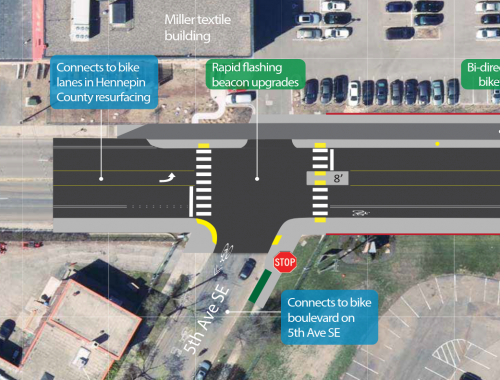 Proposed crossing of East Hennepin at 5th Avenue, with rapid rectangular flashing beacons, a pedestrian refuge median, and a sidewalk-height bike path on the north side of Hennepin.

Sometimes, trips in single-occupancy SUVs become slightly less convenient when we make our streets inclusive for all modes of travel. In this case, left turns would be restricted from E Hennepin onto 5th Ave SE from 4 to 6 pm to prevent traffic congestion behind a driver waiting to turn left. Instead of turning here, drivers would either turn earlier onto 10th Ave SE, or later at 8th St SE. This is really a small price to pay, since people on bike and foot constitute over half of the turning traffic. 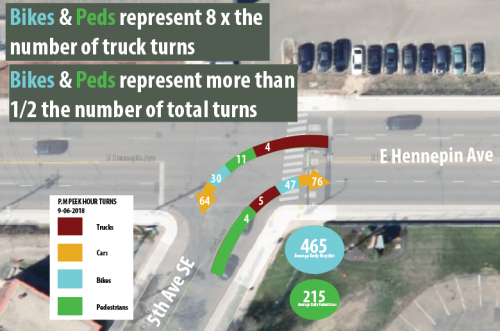 During peak hours, over half of turns at this intersection are on bike and foot, according to this graphic from the City.

Neighbors are concerned that if left turns are restricted onto 5th Ave, big trucks will come rumbling by their houses on 8th St SE during a two hour window. Yet, only four (4) trucks were observed to turn onto 5th Ave during a 4 to 6 pm traffic study. That’s only one truck per 30 minutes, during six percent of the week. This concern is pretty ridiculous, as eight times more people turn here on bike than by truck.

After this was proposed, the Marcy-Holmes Neighborhood Association sent out multiple calls to action for residents to demand a stoplight at this intersection so drivers can turn here 24/7. From the other side of Hennepin, the Beltrami Neighborhood Council put out a vague survey intended to gather support for an additional traffic study. In this survey, concerns about the crossing, like “access to businesses”, could be used to support any position. 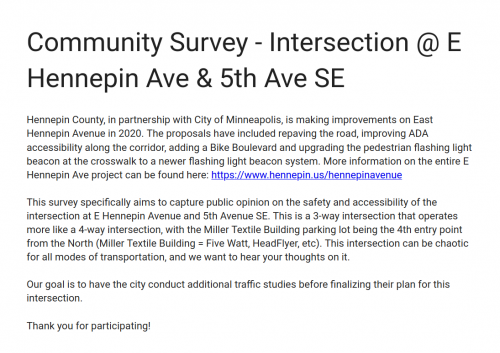 Survey about the intersection from Beltrami Neighborhood Council, which seeks “to have the city conduct additional traffic studies before finalizing their plan for this intersection.” 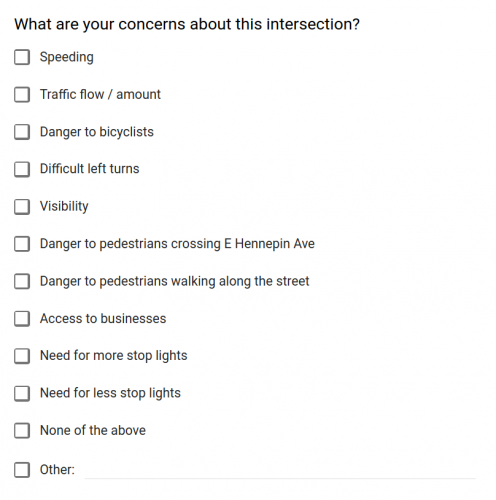 Survey question from the Beltrami Neighborhood Council on concerns about the East Hennepin/5th Ave SE crossing.

In response to these objections by neighborhood association members, the Dec 3rd City Council vote to approve this design was postponed by Council Member Fletcher.

How to Make Our Streets Safe

The danger posed by large trucks gets exacerbated by unprotected bike lanes. On 8th Street SE, where turning vehicles would be redirected from the turning restriction on E Hennepin, the painted bike lanes are constantly blocked by vehicles and covered in snow in the winter. Assuming that concerns by neighbors are about safety of vulnerable street users, not disruption of their quaint street, then what really needs to be addressed is the street design that leaves no safe space to bike. By removing free, curbside car storage spaces, there is plenty of room for protected bike lanes that would keep vehicles away from people on bikes. To make the neighborhood safer, the neighborhood associations should instead lobby for safe bike lanes. 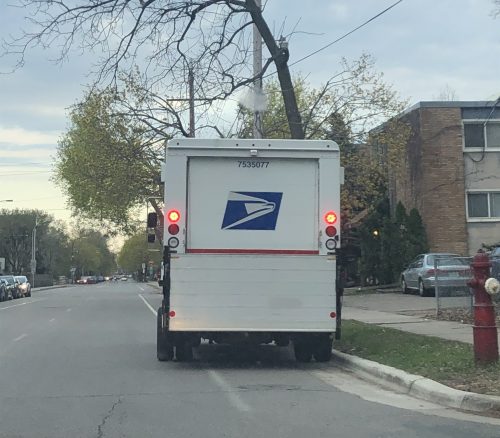 Neighbors consider the 8th St SE bike lanes an accomplishment, but they’re always blocked by vehicles like this USPS truck.

This is not all we can do to protect vulnerable street users from trucks. The city has an existing ban on trucks over 55 feet long that goes unenforced. In addition, the city should repurpose existing curbside car storage spaces for loading zones and perhaps restrict deliveries in busy areas to off-peak times.

By installing more traffic signals like stoplights, we facilitate a future with so much car traffic that we need expensive, complicated signals to control it. Now is the time for the city and county to stick to their own guidelines and prioritize people over cars.

18 thoughts on “Prioritize People on East Hennepin, Not Cars”