Rondo was part of a roadmap which detailed the ways in which black folks across the United States could be removed from their homes and property in order to build the Eisenhower freeways. The Guardian has written about this process, alongside the Atlantic, ThinkProgress, the New York Times, and plenty of other outlets. But these are American stories, in the way that America means the United States. There is another American story, in the way that America means the whole North American continent. I’m talking about Canada’s Rondo – Hogan’s Alley.

Hogan’s Alley, when you google it, is the name of an FBI training town in Virginia. It takes a little more guesswork to reach our destination… add “Vancouver”. Hogan’s Alley was a predominantly Black neighborhood in Vancouver, located near the harbor. Its makeup was similar to many of the communities cleared away for freeways in the United States: new immigrants, black families (many who were descendants of former slaves who escaped to Canada in the 1800’s), and working class whites. What replaced it were two elevated freeways – The Dunsmuir and Georgia viaducts. The roads themselves stretch for only a mile or so, and are the only completed pieces of the proposed Vancouver downtown freeway. The difference between what happened to Rondo and what happened to Hogan’s Alley isn’t obvious – what happened to the communities around Hogan’s Alley is what I want to dissect. 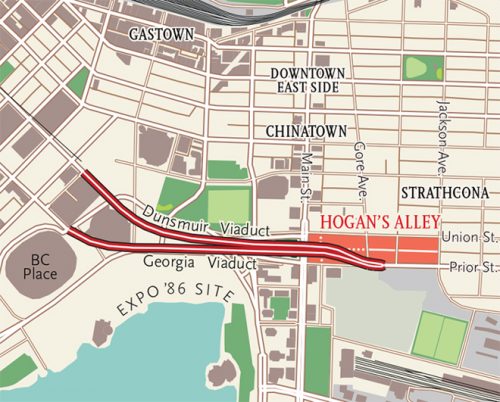 Strathcona, seen in the map above to the right of Hogan’s Alley, was next on the chopping block for “urban renewal”. Here, the residents were mostly Chinese Canadians, African Canadians and again, working class whites. First, 600 members of the community joined together to create the Strathcona Property Owners and Tenants Association (SPOTA), which focused on creating a community movement against destruction while improving the living conditions in the neighborhood and Chinatown next door. Over the next 4 years (1968-1972), nearly 21,000 Vancouver residents signed petitions to the federal government opposing further expansion of the freeway. The entire project was cancelled in 1972, with only the Dunsmuir and Georgia viaducts being opened to traffic. In 2015, the city council for Vancouver voted to demolish the viaducts. In their place, new neighborhoods will be built, nearly 50 years after the original residents were expelled.

Comparative Timelines for Hogan’s Alley, BC and Rondo, MN, from 1955 to 2015. Click for larger version.

So, what’s the connection? Simply put, community solidarity defeated urban renewal – but only once the consequences were recognized. In Vancouver, once what had happened to Hogan’s Alley was presented to the communities that would be affected, organizations formed to oppose further expansion. Those communities went above their city governments to the provincial and federal governments of British Columbia and Canada to stop the destruction, lest their community be next.

Could this have happened in the United States? In some places, the highway revolts won. Mostly, they lost. As can be seen in the map of St. Paul below, I-94 was almost bespoke-planned to go over existing low-income communities filled with working class families, people of color and immigrants. After all, this was to a statistically-significant degree, especially in Minnesota. If you look at the demographics of St. Paul today, you can still see the ripples of where lower-income folks live compared to their richer neighbors. The difference is that community coalitions are now broader-based and stronger, with Rondo being a prime example. 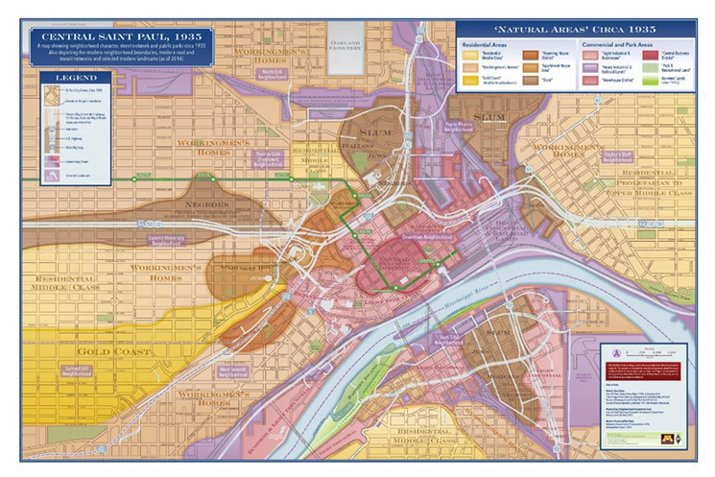 Though there are fears of gentrification as these communities are rebuilt, coalitions of neighbors from a wide background have a better shot than the segregated communities of yesteryear to prevent wholesale destruction or transformation of their homes into alien places. As Rev. Dr. Martin Luther King put it in his Letter from Birmingham Jail, “[w]hatever affects one directly, affects all indirectly. I can never be what I ought to be until you are what you ought to be, and you can never be what you ought to be until I am what I ought to be.” Next time you get the chance, make sure to stand by your neighbor – you never know when they’ll get the chance to stand by you.