Attention, Dinkytown regulars! If you’re interested in helping advocate for sustainable transportation solutions for the neighborhood, you’ll have a chance at next Tuesday’s Dinkytown Transportation Forum! 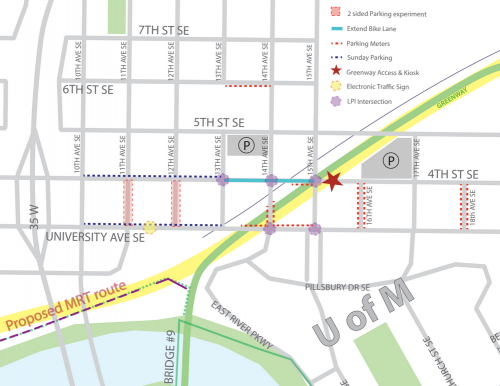 Dinkytown is getting crowded

Even before these projects come to fruition, the area’s parking infrastructure is quite overwhelmed. Redevelopment taking place on surface parking lots has vastly reduced the net quantity of public parking available in the area, while vastly increasing the number of people who need to get around Dinkytown. The Venue and The Marshall have replaced 300 parking spots with 65 and 45 respectively, each open only to tenants of those buildings. [Edit: The Venue’s parking structure actually does allocate some space to public parking, although at a higher price point than the previous surface parking]

One of Minnesota’s best walk/bike/transit neighborhoods

This isn’t to say that Dinkytown is completely unprepared when it comes to non-vehicular transportation options. The area is one of Minnesota’s great bicycling crossroads, including rich on and off-street connections to the U of M’s East and West Bank, Downtown and Nordeast. 15th Ave SE, one of the neighborhood’s principal arterials, is actually the most cycled street in the state. 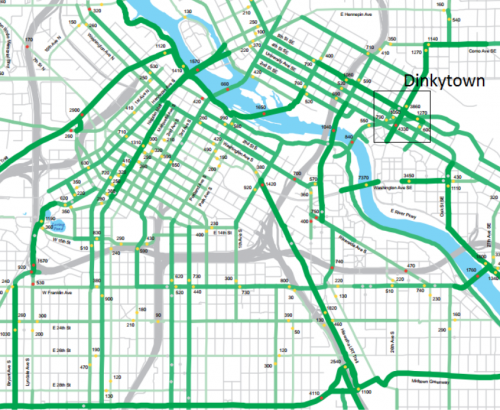 The neighborhood is also served by Metro routes 2, 3, and 6U, some of the highest ridership bus routes that Metro Transit provides. The East Bank station on Metro’s Green Line light rail is also ¾ of a mile from the heart of Dinkytown.

Superior connections that could be even better

Even with these already robust figures, Dinkytown is rich with potential. Neighborhood leaders have identified a number of improvements that could help the area’s non-vehicular mode share truly blossom. An easy win would be to establish a leading pedestrian interval (LPI) for the area’s busiest traffic signals. You might be familiar with this ambiguity-eliminating signalling scheme, which has been giving pedestrians an early green light in Uptown since 2012. Combined with increasing ridership on Dinkytown’s already over-performing bus lines, the area could be well on its way to a transit rider’s paradise. 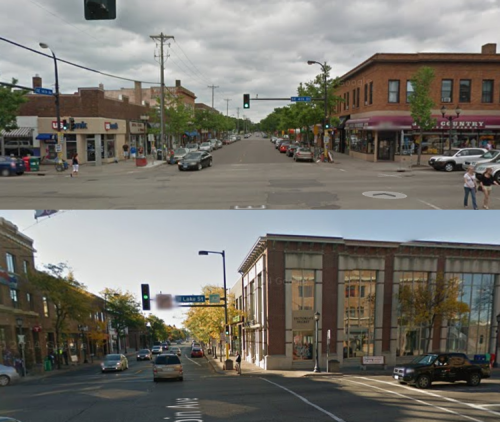 Intersections like 4th St SE and 14th Ave SE could receive pedestrian-first signalizations (top) like those at Hennepin and Lake (bottom).

The area’s bicycle infrastructure has several gaps in connectivity that may have simple solutions. Dinkytown’s new Greenway is probably the best bike path in the area, but suffers from not actually having an exit in Dinkytown. Luckily, a staircase along the Dinkytown Greenway’s south wall has been given the green light. This funded project has yet to see preliminary engineering, which means that there’s still a chance for this connection to end up as a Midtown Greenway-style ramp. This would provide direct bicycle connections between Downtown East and all three U of M Twin Cities campuses. 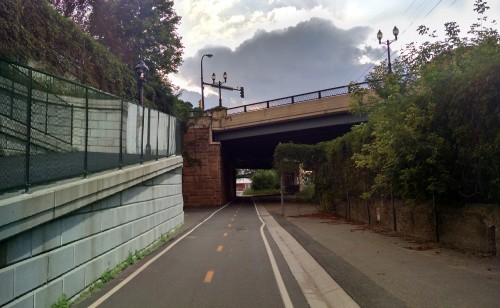 Another gap in connectivity at the Stone Arch Bridge terminus on the east bank of the Mississippi, which lies only around four blocks away from the Dinkytown Greenway. The neighborhood and city have collaborated on a ‘Mississippi River Trail’ task force, which is currently negotiating with the railroad company that currently owns the right of way. If completed, this connection would not only provide off-street bicycle and pedestrian connections from Dinkytown to Downtown Minneapolis’ front doorstep, but also down the Park and Portland Ave buffered bike lanes to the Midtown Greenway and beyond.

Finally, those who cycle Dinkytown regularly surely notice the sudden disappearance of the SE 4th St bike lane between 13th and 15th. The neighborhood is considering bridging this gap, exchanging some of the most valuable parking in Dinkytown for a continuous bike lane. This option is only feasible if the city can allow metered parking on the neighboring bridges over Dinkytown Greenway. The city is already studying the possibility of protected bikeways on 4th St SE and University Ave SE, and this parking maneuver could only bring that dream closer to fruition. 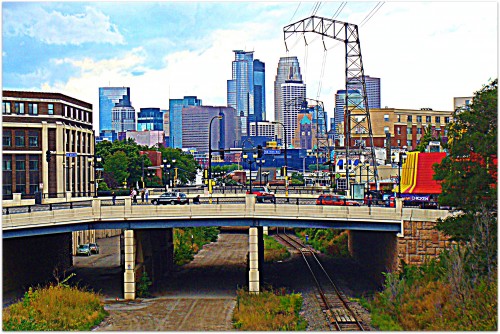 If you’re a Dinkytown regular who’d love to see the neighborhood realize its true transportation potential, please make your voice heard at the forum!

This article is cross-posted at the Minneapolis Bicycle Coalition Blog

19 thoughts on “Transportation for a Booming Dinkytown”