This is Part Four in a series on the new Stillwater Bridge. Parts One, Two, and Three dealt with the backstory behind the bridge, from vague rumblings in the 1950s to refinements to the design after it was committed to be built. Here are a few thoughts of what lies “beyond the bridge” after it opens.

The Downtown: Grow, Stagnate, or Die

The most obvious question with the future of downtown is what’s going to happen when 17,600 cars each day suddenly disappear. There’s plenty of examples of old traditional downtown that have been bypassed. Hopkins, Shakopee, Hastings, and Anoka come to mind, although US 169 still goes through Anoka despite years of efforts of local agencies north of the river to get a new bridge built there. None of these seem to be doing quite as well as downtown Stillwater, and downtown Shakopee is downright sleepy. The downtown buildings are certainly much more impressive than Hopkins, there are more of the types of stores to draw tourists, and there is the river. Shakopee has the river too, but it’s separated from downtown by the kind of wide suburban style roads that were once proposed to separate Stillwater, and frankly the Minnesota River isn’t as attractive.

There are some interesting statistics from the 1990s origin-destination studies. First of all, only 8% of the shoppers in downtown Stillwater are from Wisconsin. Of these, a large percentage are probably people that would continue to shop there anyway- the new bridge is only a couple of miles out of the way- and not impulse stops from through traffic. Second, of the cars that do not have a destination in the Stillwater area, only about 8%  stop (total 579 on weekdays and 464 on Sundays), and that includes anywhere in Stillwater, not just downtown.  That fits with my personal experience, when I’m stuck in traffic I’m not in the mood to make an impulse stop for an ice cream cone or an antique glass bottle and if I’m going to stop it will be at the McDonald’s.

Clearly the cars stopping in downtown that will now bypass it are small, relative to both the number already going through without stopping, and the overall shoppers already downtown. Periodically the bridge closes to be patched up or when it’s flooded out, and some of the businesses actually reported an increase in sales as residents weary of the incessant traffic started venturing out. Stillwater has already been Wal-Marted, so most of the “go pick up light bulbs” traffic has already left for the commercial strip.

Imagine how much nicer downtown will be without all these cars.

I’d also throw out my opinion that the new bridge is probably the best option for downtown. A new bridge adjacent to the existing location would still bypass the core downtown, preclude the loop trail and severely impact or preclude the new parks south of downtown, and be a major new structure near the historic buildings blocking the view of the river (for navigation it would need to be 60 feet high). Closing the bridge would completely eliminate the possibility of through traffic stopping (even if not a lot of it does). Maintaining the existing bridge would result in it simply wearing out sooner rather than later and pedestrians still being restricted to the narrow sidewalk.

Downtown is being pro-active at preparing for change. Specific suggestions have been to highlight the old buildings with illumination, better signage illustrating local history, being aggressive in promoting new business opportunities, and filling empty holes in the streetscape.

Adjacent to downtown, an obvious improvement that will draw people will be new parks extending along the river both north and south. As mentioned before the 17 acre Bridgeview Park extends south from downtown almost to the new bridge. Now that the Terra-Terminal building has been demolished (as mandated by the Memorandum of Understanding mitigation), developing it into a visitors center and picnic shelter are no longer options. Instead focus is on building a municipal boat dock, additional parking and access, and a boat launch, as well as what to do with the Shoddy Mill buildings. They are a subject of a separate study. A restaurant would require too much parking even with the additional parking being built, so suggestions have been a coffee shop, bicycle shop, and a possible operations and maintenance facility for the boat dock. Development costs are estimated at $10.7 million over five phases. MnDOT is paying for about a third (paving the trails and constructing some accesses), the boat launch and dock are about half.

To the north, in 2014 the 15-acre Aiple property with a half mile of shoreline was purchased for $4.3 million. Planning is still in the preliminary stages, but I’d expect it to be left in a more natural state. Apart from the homestead itself, it’s a lot more natural than Lowell or Bridgeview Parks, where the more intensive uses will be accommodated and are more disturbed from past industrial use.

The 5.9 mile Browns Creek Trail has opened on the former Northern Pacific Railroad right of way that formerly went to White Bear Lake. For the first time it will offer bikers a gentle grade (2 percent) out of the valley. Linking up with the Gateway Trail and thus to downtown St. Paul, it is one of the most exciting additions, with an estimate of 75,000 users a year. Downtown Stillwater will have gone from “zero” to “a lot” of real bicycle trails (as defined as something more interesting than a multi-use path next to a wide suburban-style road) in a few short years.

The Brown’s Creek Trail through the Aiple Property. In the hour I was there I saw dozens of users. This was the first really nice day it was officially open.

New Stillwater parks (in green), the Browns Creek and Loop Trails (red) and the multi-use path along MN 36 (white).

Theoretically it would almost be possible to ride around the edge of Stillwater using portions of the Browns Creek, Loop Trails, and the unnamed new trails along the MN 36 frontage roads and along Manning Ave, but realistically it’s not a type of place one thinks of as a recreational bicycle trip, featuring some of the spectacular scenery shown below.

The current plan for the existing bridge is to have the bicycle trail down the center, with pedestrian paths on either side. The long-removed acorn lights will be replaced, supplemented with overhead lighting. The bridge will be returned to its original green color (it was repainted grey in WWII).

One thing is evident: There’s a sea of lot of surface parking and a gasoline station between the historic buildings and the riverfront parks.

A Sea of Parking

Downtown Stillwater: Existing Surface Parking = Yellow; Existing and proposed bicycle trails = Red. Before I found the actual plan, I highlighted existing and my idea of potential structured parking in purple, which lined up closely with actual proposals.

There’s appropriate places for a sea of surface parking lots, but between a historic downtown and the riverfront parks is not the Shakopee Walmart. (Parking is such an issue that the city even has a specific parking committee.) The city is at least being realistic in that people are not going to park in some remote lot in Oak Park Heights and ride a slow bus downtown, so the plan is to replace it with structured parking that has street level retail along the 2nd Street north corridor that’s an easy walk from Main and the river. 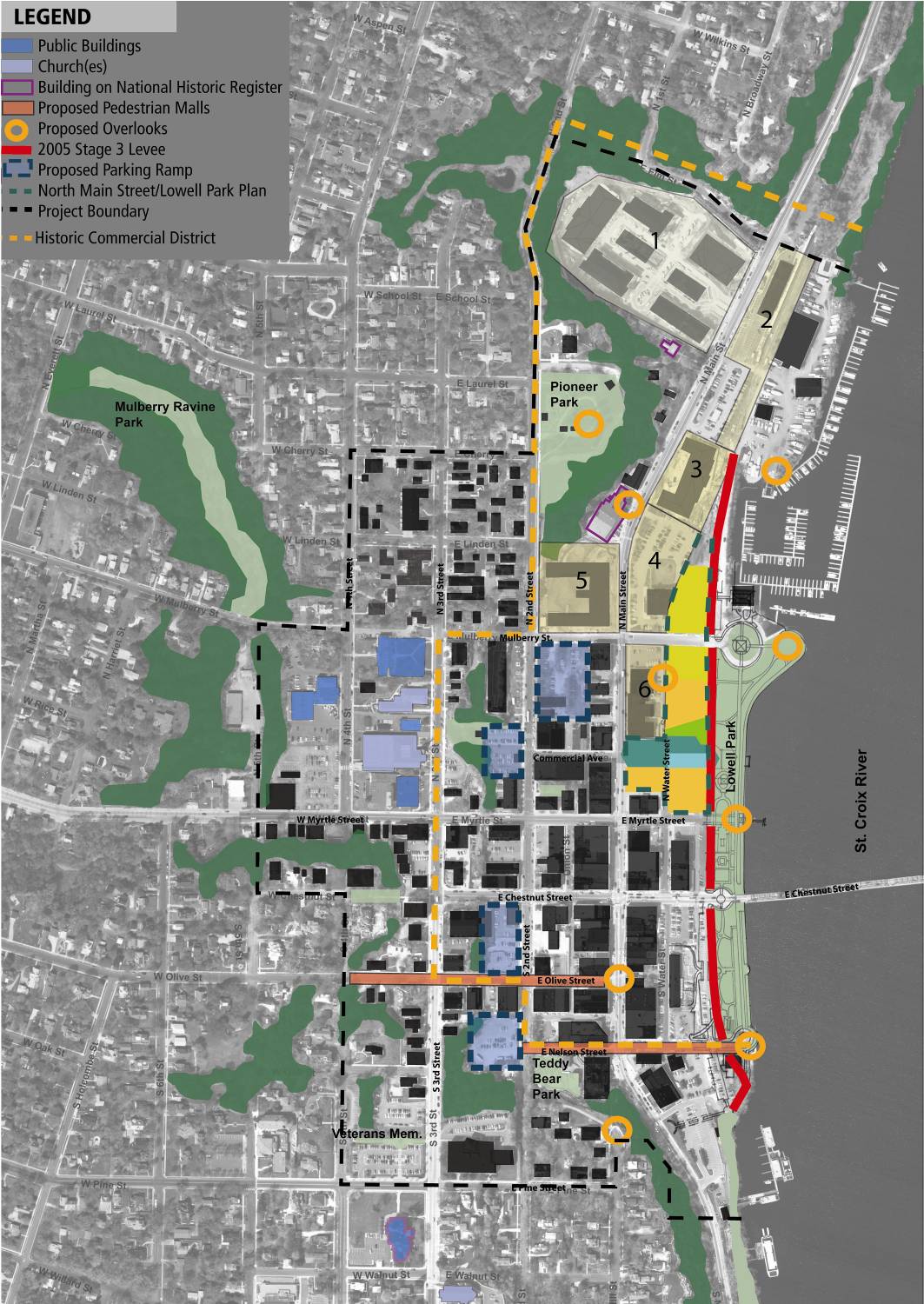 In this map from the comprehensive plan, existing and proposed garages are outlined in blue. Having the city subsidize the garages to encourage people to travel downtown may preclude setting parking rates at what it actually costs, although developing some of the surface lots could help offset it. The uncertainty about where and if a new bridge would be built might be another reason the lots are still there. Recently the city has proposed charging fees for the remaining free lots, which has not gone over well with local businesses.

As for what will replace the surface lots, it’s unclear. North of the bridge, the plan for the surface parking east of the bicycle trail seems to be to add it to Lowell Park, but west of the trail I’ve seen various proposals to build structured parking on some of all or it, or else allow commercial development. (The 2004 North Main Street/Lowell Park Plan had the entire thing as a parking deck), a later parking study had a much smaller portion as a parking ramp, and the above graphic doesn’t mention any. From south of the bridge to Nelson Street the lots are mainly private, and don’t seem to be the subject of any plans. The southernmost lot will remain for parking for the new park, and as mentioned above, more paved parking for the park will be added.

With the oncoming reduction in traffic, there is also opportunity for pedestrians to reclaim some of Main Street. There’s a current proposal that would convert Chestnut Street leading up to the bridge to a pedestrian mall, which means that the massive left and right turn lanes leading up to it would be completely unnecessary. It’s been confirmed that on the north side, at least, this space will go towards wider sidewalks, and I’d expect this to be discussed for the south side also.

Thinking more broadly, it might also be time to start having conversations about the future of the highway system in the area, not just what gets built, but who owns it. Like is it still even appropriate for Main  Street to be a trunk highway? The long term goal is to have state ownership coincide with principal arterial status. Right now only MN 36 and I-94 are principal arterials, but 5, 95, and 96 are still trunk highways. At least in the short term transferring them all isn’t reasonable, considering there’s so many other dubious highways around. But I’d consider moving MN 95 onto Manning (which would require legislative approval since right now MN 95 must go through Bayport), and turning back existing MN 95 and MN 5. Manning is rapidly becoming the preferred major north-south route in the area, and there’s plans to rebuild the junction with MN 5 to favor north-south traffic, as well as expand Manning to four lanes in order to handle the anticipated 25,000 daily traffic volume. As Part One notes, this was actually proposed decades ago (although I certainly don’t think at this time the shortcut on new alignment north of MN 96 is needed.)

Time, of course will be the ultimate judge, but personally think downtown has a very bright future. And finally, a link to my Flickr set. I’ve been taking photos since the beginning, and went on a bridge viewing cruise last year.