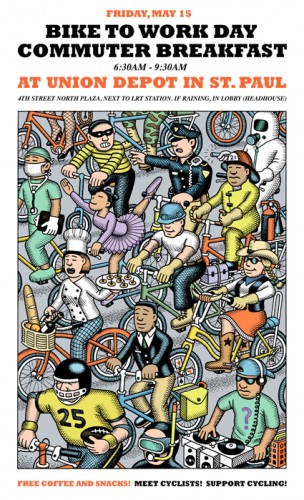 National Bike to Work Week is coming up and, for once, Saint Paul has something to celebrate. We passed a bike plan back in March and already we have three potential bikeway projects up for public discussion. We’ve moved from having public meetings about plans (many of which never got implemented) to having meetings about actual, proposed bikeways.

The first and most useful project being proposed is putting bike lanes on Cleveland Avenue from Highland Parkway to Summit Avenue. This would connect Highland Center to the University of Saint Thomas and the Summit Avenue bike lanes. Currently the only way to safely get from Summit Avenue to Highland Center is either on Finn Street or Mississippi River Boulevard. Unfortunately, Finn doesn’t go through the entire corridor but requires that riders cut over to Cleveland at Niles (going southbound) or West Hartford (going northbound). The River Road, while nice, requires that a rider bike an extra mile and a half and negotiate at least one good-sized hill. So striping bike lanes on Cleveland will make a direct connection and significantly cut travel times. Highland Center is a major neighborhood destination for folks to the north. It has a Lunds supermarket, a few bars and restaurants, lots of small shops and a library and recreation center.

This project may also benefit students. Students at the universities of Saint Thomas and Saint Catherine’s can and do take classes on each other’s campuses. Both schools are part of the Associated Colleges of the Twin Cities or “ACTC” system. They allow cross-registration for courses and share library materials and other resources. For over a decade, there’s been a shuttle bus to connect the campuses but, because of budget and ridership problems, the bus service is ending. This will make bicycle connections between the two campuses even more important.

To stripe the proposed Cleveland Avenue bike lanes, some parking will have to be removed between Randolph and Grand Avenues. Parking bays will remain for businesses near Saint Clair and Grand but much of the remaining parking on one side of Cleveland will have to be removed. There are ways to mitigate this and there are significant amounts of unused parking on the various side streets. Unfortunately some folks want “Rock Star Parking” right in front of their homes or businesses and will undoubtedly fight its removal. The eventual goal is to stripe bike lanes on Cleveland all the way up to Transfer Road and Pierce Butler, with a bridge over the railway lines to Como. This would create another, much-needed north-south cycling connection.

The Second project is putting bike lanes on Lexington Avenue between West Seventh Street and Randolph Avenue. The goal here is to eventually extend the lanes to Jefferson Avenue and the Jefferson Bikeway. This short stretch would offer another way to get off the bluff and down to West Seventh Street, which has grocery stores, bars, restaurants and other services. It would also give cyclists a safe way to reach Trader Joe’s and a cluster of businesses at the corner of Randolph and Lexington. This cluster could soon grow if the city and county go ahead with plans to acquire property on the northeast corner for residential and mixed retail development. Again, the project would require the removal of parking on one side of Lexington Avenue.

The last project is on Front Avenue. In the short term this would connect the Lexington and Chatsworth bikeways with Como Avenue but the eventual goal is to create a continuous east-west bikeway from Como along Front and Energy Park Drive to the UMN Transitway and Minneapolis. The Open House for this project is coming up on Wednesday, May 6, from 6-7:30pm at the North Dale Recreation Center at 1414 St. Albans Street North. Like the other two projects, this one would require removal of some parking but most of it would occur along a graveyard and hopefully be less controversial.

All three projects are on streets that will be getting repaved this summer by Ramsey County. So the public process is moving quickly. Because all three require the removal of some parking, I urge anyone who lives or works in Saint Paul and supports these projects to e-mail a note of support to Reuben Collins at the Public Works Department. His e-mail is reuben.collins(at)ci.stpaul.mn.us. Tell him why you support the projects and cc your message to your City Council member and your Ramsey County Commissioner. The city has also created a way to comment on these projects on its “Open Saint Paul” forum. Just click on the project title and log in to leave a comment.

On May 9, Saint Paul Smart Trips and Women On Bikes are organizing a Mother’s Day Ride (one day early). Riders should meet at 9:30am at Groundswell for coffee or snacks. At 10am they’ll begin a leisurely ride along the Charles Avenue Bikeway to the downtown Saint Paul Farmer’s Market. This is a family-friendly ride, so bring your kids.

On May 12 at 6pm, the Saint Paul Bicycle Coalition is organizing a downtown ride and discussion of the various proposed routes for the “Downtown Off-street Loop” proposed in the Saint Paul Bikeways Plan. Meet at the Union Depot Bike Station Space on Sibley Street (between 4th and Kellogg). You can lock your bikes in front of the depot (there are racks) or try to bring them inside. We’ll look at some maps and give a brief overview and then ride around downtown for an hour or so, stopping to discuss the various routes. We’ll end at the Black Dog for a little food, beverage and continued discussion. 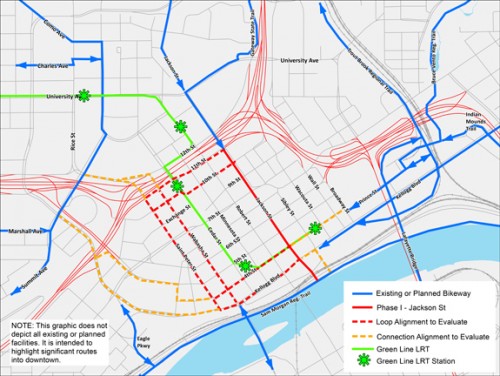 On Bike to Work Day, May 15, the Saint Paul Bike Coalition is hosting the annual Commuter Breakfast in the North Plaza off of 4th Street, in front of Union Depot from 6:30am until 9:30am. If it’s raining, we’ll be inside, in the main lobby (also known as “The Headhouse”). There’ll be free coffee, free snacks and free bike tune-ups. We’ve created a Facebook page for it.

So invite your friends, get involved and help us make Saint Paul a better place to ride!