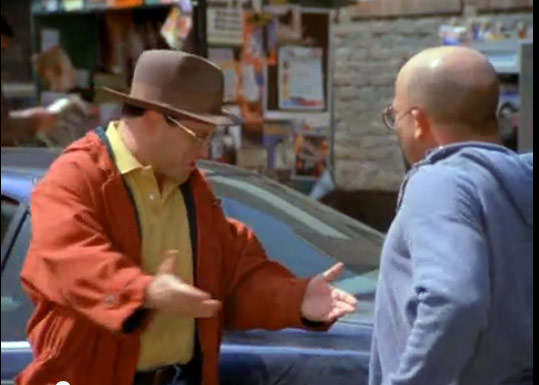 “The problem is obvious!”

In Saint Paul, parking remains one of life’s great mysteries. The longer I live here, the less I seem to understand the things people say about parking and walking. Logic seems to twist and transform like hallucinated dragons.

For example, last month’s spate of articles on the “Saint Paul parking problem” were full of interesting quotes. Each of these articles began by citing findings from the city’s recent parking study, documenting the thousands and thousands of underused downtown parking spots. But then came the quotes.

From the Star Tribune’s take on the “quickening pulse” of Lowertown [obvious irony emphasis mine]:

“When you live here and you have to go two extra blocks to get your car or bring your groceries home or a new plant, it’s going to be a problem,” said Lisa Kloster, walking her dog Lola near her Lowertown condo. “We can’t plan any activities when a game’s going on because [friends won’t] be able to come down here.”

From the Pioneer Press’ piece asking, “Where will everybody park?”:

Is it a matter of expectations? Some say that for a city St. Paul’s size, residents should start getting used to these types of issues.

“Nobody in St. Paul likes to walk. … If they can’t pull up right next to the restaurant, they’re not happy,” said developer Dave Brooks, who owns the Alliance Bank Center at 55 E. Fifth St. “St. Paul has just got to get in a different mindset.”

“When you’re used to something, it’s a lot harder to go backwards. You kind of get spoiled over here,” Lowertown Commons property manager Longie said. “We are excited about the happenings, about the Saints being a part of the neighborhood, bringing more life to the neighborhood.

“We just want to make sure the city is covering their bases, and they are aware there is a parking problem.”

[For much more on this tension, see other posts appended at the bottom.] 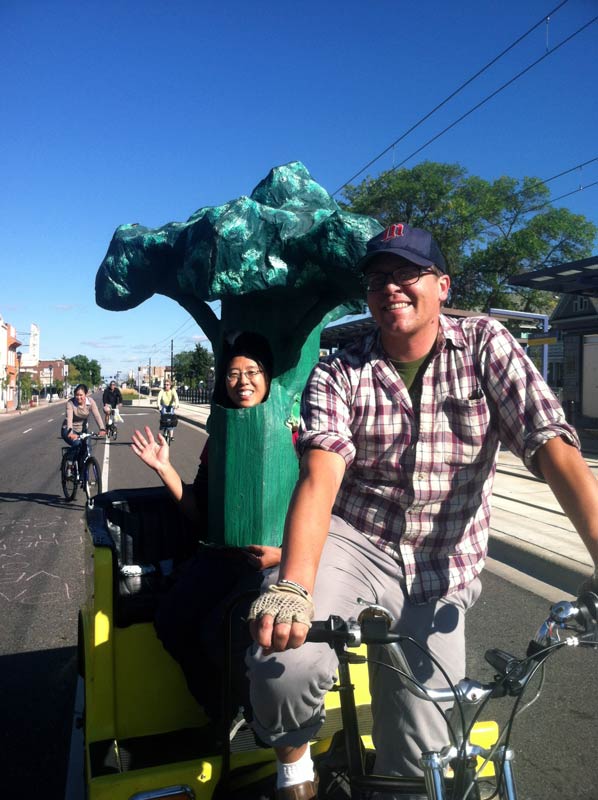 Me and a broccoli.

Sporting events offer a great example of how “the parking problem” works because the destination and population size is so discrete. For example, what happens when you compare the parking situation at the old Saints stadium and the new Saints stadium?

For the last two summers, I’ve had a Saint Paul pedicab license, and spent the occasional off evening schlepping people around in the back of one of those boxy yellow bicycles. Mostly, there are two kinds of rides you end up giving people: joyrides, and rides to and from parking spots. And in Saint Paul, where there’s almost never a critical mass of street life, pedicab drivers focus on the latter, taking people to and from Wild games, Xcel concerts, the Farmer’s Market, or Midway Stadium to watch Saints games.

Believe it or not, for a self-proclaimed urban geographer, spending a few hours pedaling a bike taxi up and down rows of parked cars can actually be interesting. In addition to seeing the many varieties of Saints fans (from families to small gangs of teenagers to young couples and the occasional hipster), you can watch exactly where people park.

At the old Midway stadium, with only one road available (Energy Park Drive), the parking dynamics were pretty simple. If you wanted to park next to the stadium, you paid $10; for a lot within a 2-5 minute walk, it was $5. For free parking, it depended on when you arrived; on busy games, latecomers searching for free parking would park on the other side of the railroad tracks, almost to Raymond Avenue. That’s a distance of exactly one mile, which is a 20 minute walk for a normal person. 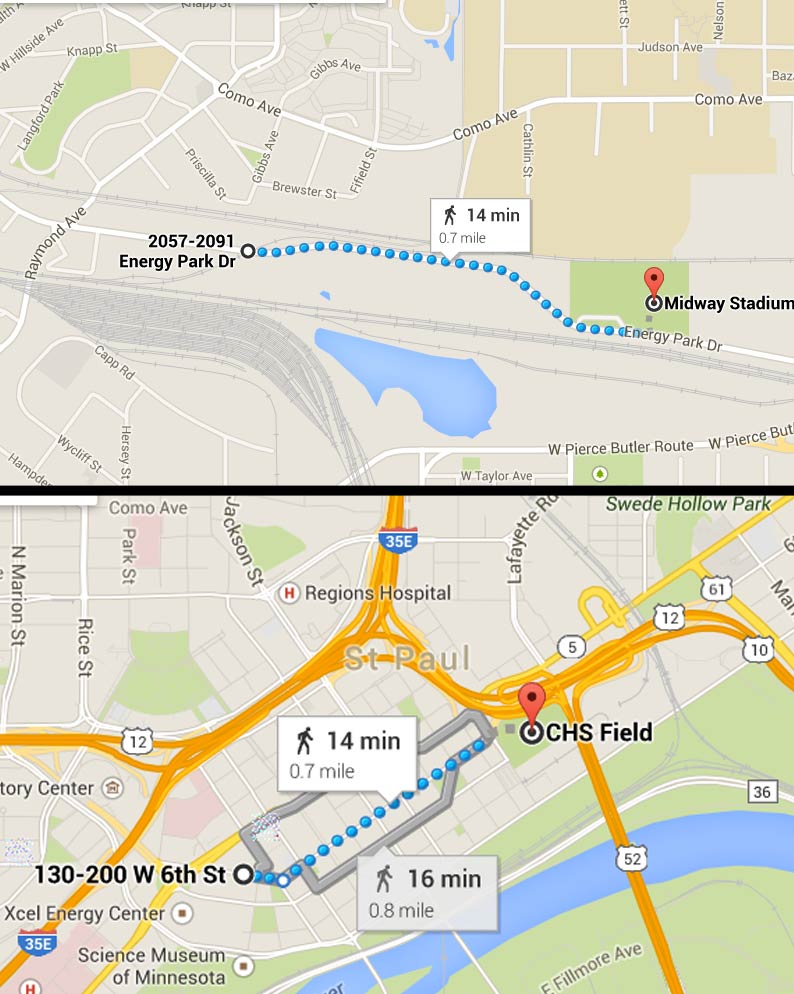 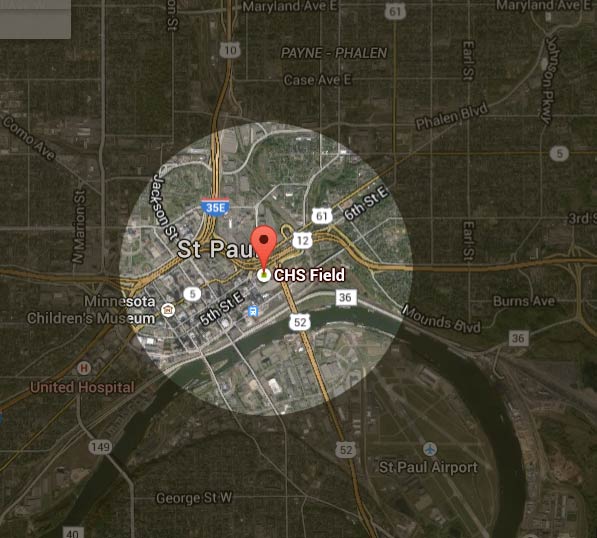 A 3/4 mile radius around the new Saints ballpark grants you access to most of downtown Saint Paul, plus the East and West side.

The point is that parking, particularly during sporting events, functions as a pretty efficient market. People weigh the value of their time and mobility, look at the parking options, and make a relatively informed decision. Those who value being close pay more; those willing to walk pay less. (Those desiring a fun trip in a pedicab paid me.)

In the Pioneer Press’s most in-depth piece on “the parking problem,” they offered this keen analysis:

A Pioneer Press accounting of Lowertown’s lots, public and private, reveals that yes — while “plenty” is definitely pushing it — there will be just enough parking in Lowertown to accommodate Saints fans and employees, provided no other large events are going on.

Defining what exactly the “parking problem” in Saint Paul is more difficult that you might think. The assumption that people are unwilling to walk six blocks to a baseball game is a baffling to me, given how far people have been walking for years to attend Saints, Twins, and Vikings games in the Twin Cities.

Perhaps what we are facing isn’t a parking problem, but a walking opportunity? 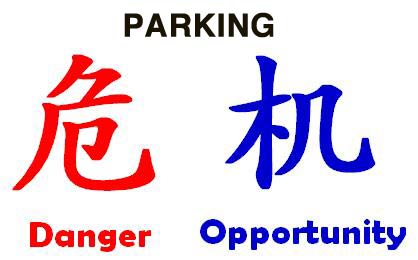 For more on parking in downtown Saint Paul, see:

Take Me Out to the Saints Game