2016 is disappearing quickly — Only one Sunday Summary left before 2017 (and next Sunday falls on Christmas). Before the end of the year, we’d like to encourage you to join us as a member of streets.mn; your donation is tax-deductible and will help us make website and editorial improvements. Or, write for us. streets.mn depends on its volunteer writers to provide the content and as our mission is to expand the conversation about transportation and land use, more voices are always needed to help us carry this out.

Exclusionary Zoning: the New Redlining looks at a November 2016 statement on local land use laws from the federal government “about how the Fair Housing Act of 1968 (and its amendments) apply to city laws governing land use. If a city passes a zoning law without any intent to discriminate, but the law happens to have a discriminatory effect on people of a certain race (or people with disabilities, or any other protected class), then the law might violate the Fair Housing Act.” Turning to Minneapolis neighborhoods, Scott Schaffer looks at data showing the discriminatory effect of the “wildly popular land-use control that appears race-neutral but in effect causes racial segregation: R1, the low-density residential zoning district.” This post fits in with the growing number of posts about downzoning in Minneapolis neighborhoods (like this one on the history of downzoning). 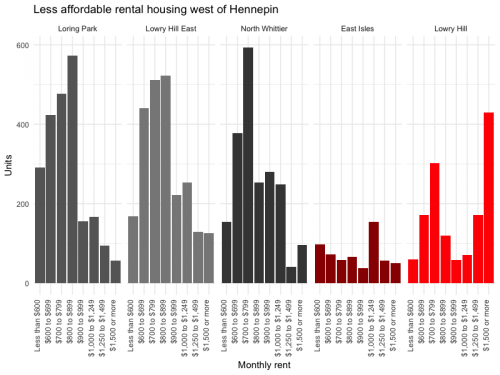 Nick Magrino discovers a Metro Transit document showing future transit lines Introducing the B & E Lines in Minneapolis saying “Wow, looks like we have planned aBRT lines in many of the places where it makes sense to make investments in transit. And they’re super cheap!” and further “The aBRT network is a good thing we should be rolling out as quickly as possible. Are we doing that? Nope, we’re mostly still reaching for that extremely high hanging fruit–the guy who owns two cars and lives in Chanhassen and works in downtown Minneapolis and is mildly annoyed about having to pay for parking.” This is not the first time Nick has written about aBRT and putting transit where it makes sense; see last year’s Arterial Bus Rapid Transit Could Save Us from Ourselves, too.

Documenting transit changes is Aaron Isaac’s The Quarterly Transit Report–December 2016 with a quiet quarter with only two suburban route extensions to report. First, Route 722 from the Brooklyn Center Transit Center to apartments near 65th Avenue N. and Dupont running half-hourly but now “hourly service has been extended seven days a week to the Target North Campus via Humboldt Avenue, Brookdale Drive, Zane Avenue and Oak Grove Parkway,” adding off-peak service to parts of Brooklyn Center and Brooklyn Park for the first time.  The second extension is designed to serve the Shakopee reverse commute to serve large employers (like Amazon) in Shakopee.

Potential Paths for Passenger Rail in North Dakota continues reviews of passenger rail possibilities in the northern United States (and Norway). This week, Mike Hicks continues the process in North Dakota that he started in Minnesota and Wisconsin. This time, however, there’s also a comparison with another project, the Dakota Access Pipeline “estimated to cost about $3.7 billion over a 1,172-mile route. It is a very different thing from a railroad, but it makes me wonder what we could achieve if similar amounts of money were put into passenger service or improvements for existing freight trains. For instance, $3.7 billion would probably pay for converting 1,500 to 2,000 miles of railroad to electrified service, allowing a substantial number of diesel locomotives to be retired and replaced with more efficient, emission-free units instead.” Moving people rather than building pipelines would take political leadership, but worth considering.

False Choice Between Bike Lanes and Heroin on Glenwood highlights discussions and decision at the Minneapolis City Council (video included in the post) for reconstructing Glenwood Avenue. Dissenters highlighted the need for protected bike lanes, but Melody Hoffman argues a false choice was presented of either choosing protected bike lanes or improving other aspects of this North Side neighborhood. In case you missed it, last week had another post on Glenwood highlighting needed safety improvements. 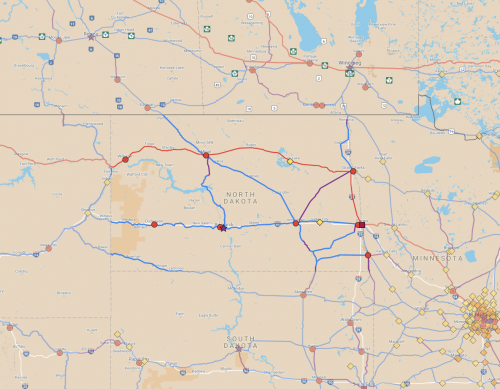 Map of suggested routes in North Dakota and surrounding areas.

In Defense of Livability on Cretin Avenue from new writer Tim Iverson looks at the grand plans for the former Ford assembly plant site in Saint Paul and notes, “What concerns and frustrates me about the Ford site initiative to date is its focus on one piece of real estate.  The city is like an organism with many members, each affecting the experience and quality of life of the whole.  Missing is consideration of the impact this development will have on the lives of those whose homes border the development; in particular, residents of neighborhoods where I live along Cretin Avenue.”

Also seeing the larger picture in Rochester in A Missed Opportunity for Placemaking, architect Adam Ferrari reports a demolition permit has been issued for one of the few remaining historic hotels in the downtown core (with as yet unspecific plans for replacing the Carlton Hotel building with something bigger). Adam advocates for not following through with demolition and attempting to reuse the building which is embedded in Rochester’s identity (and following through on DMC goals for historic preservation, too).

Map: Map Monday: Twin Cities Multi-Family Density comes from a recent Met Council meeting and perhaps relevant the post on the B & E Lines in Minneapolis above and recent posts on downzoning, too. 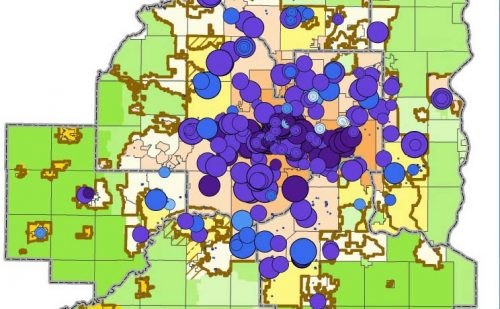