Minneapolis is a streetcar city. Maybe it’s hard to tell if you mostly experience it by using a freeway to get to downtown, but out on the city’s surface streets, it’s easy to see once you know what you’re looking at.

The Riverview Cafe, in a building built in 1928 along a streetcar line

The last streetcar rails were torn up (or just as likely, paved over) in in 1954. Aside from high rise towers, most of our housing stock was built before that: 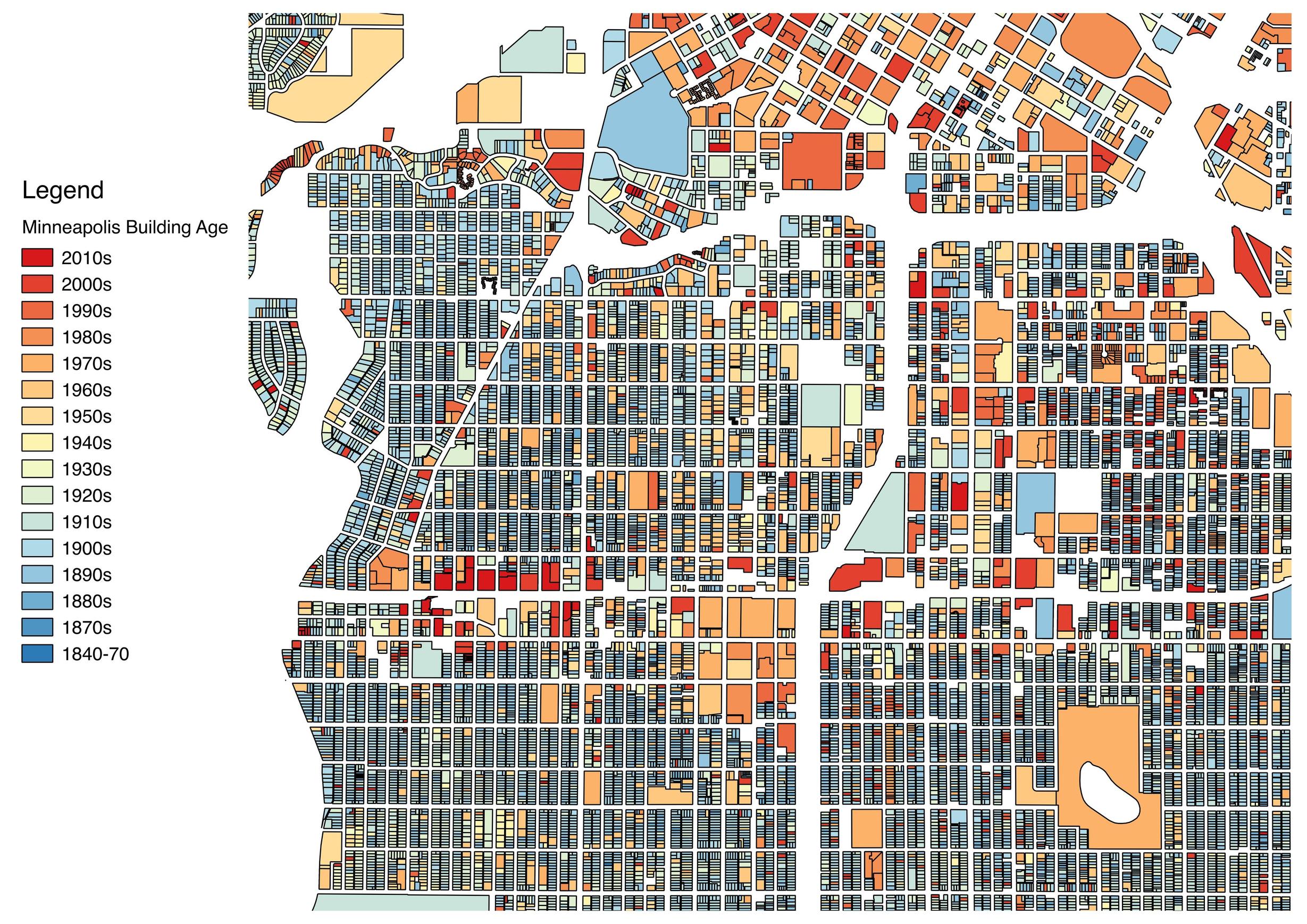 Map showing the age of buildings for a large part of the city, by Ethan Osten and used with permission.

Not surprisingly, this also means that most of our housing stock was built within a short walk of the streetcar.

Map of the Twin Cities Streetcar System as of 1933 (Source: MinnPost, apparently via Brett McKean)

The city grew following a familiar pattern. Walk around, for example, Minnehaha Avenue, and you will see larger buildings on Minnehaha itself and a gradual decreasing level of density blending into the neighborhood interior. It’s subtler to see on somewhat smaller streets/routes like Bloomington Avenue, but it’s there too. Bloomington is lined with duplexes that don’t look much different from single family homes of the same age. The pattern appears all over the city.

Then came the era of cars. We tore huge trenches through our city (not coincidentally directly through black neighborhoods) for freeways. We tore down areas deemed “blighted.” We used our transportation policies and spending to facilitated driving into downtown from the suburbs and out of our neighborhoods to big box stores in the suburbs or on the urban periphery.

Meanwhile, the city’s population peaked with the 1950 census and then went on to decline for decades. Whether because of the freeways and the teardowns or just shrinking family sizes, there were fewer residents to support local businesses and less apparent reasons not to zip to retail that’s farther away. Many of those local retail places died.

Buses often run more or less where the streetcars did (even expanding coverage in some areas), but even if buses are equivalent (I’m not sure), our zoning doesn’t allow the old pattern of growth. Instead of replacing an aging or too small single family home with homes for two, three or four families, we get things like this, along the route of the 23 bus and an old streetcar corridor:

Under our current zoning, we get two larger single family homes, because that’s what the zoning allows. Meanwhile, just a few blocks to the south we see what used to be allowed:

This duplex built in 1927, a structure that sure seems in harmony with its surroundings to me, does not conform to the area’s existing R1A zoning.

We’ve been going in the opposite direction for so long. In addition to replacing aging houses near transit with large single family homes we’re replacing cheaper housing with more expensive housing. And missing the opportunity to add families to our neighborhoods.

That’s exactly what city’s new draft comprehensive plan is meant to allow, with each part of the city allowed – not required – to move up to the next level of density. Gradually increasing density by allowing multiple units in similarly sized buildings in the neighborhood interiors and larger buildings near transit helps support healthy neighborhoods with enough residents to support neighborhood businesses, with enough density to support transit ridership and enough housing options such that not every single trip has to be done in a car. The new plan is really the original plan. Let’s try it again.

21 thoughts on “Bring Back Streetcar Living”