This is Part Six of an ongoing series of the history of Minnesota’s trunk highway system. Part One covered the early days of government and privately built roads. Part Two covered the events leading up to the establishment of the trunk highway system in 1920. Part Three covered the coming of the U.S. numbered highways and the 1920s improvement projects.  Part Four covered the great expansion of 1933 and start of the concepts of expressways and pleasure driving. Part Five covered additions statewide up to the present. Here the series concludes with a look at the deletions statewide, and recent changes to the metro.

A number of waves of highway additions have been covered, but there was also a reverse trend of removal from the trunk highway system. Although the first route removed was the original MN 110; in the 1980s the pace picked up. There was now a trend of a couple of removals every year; much faster than new highways were being created. Here’s a map statewide of the trunk highway removed without being replaced. 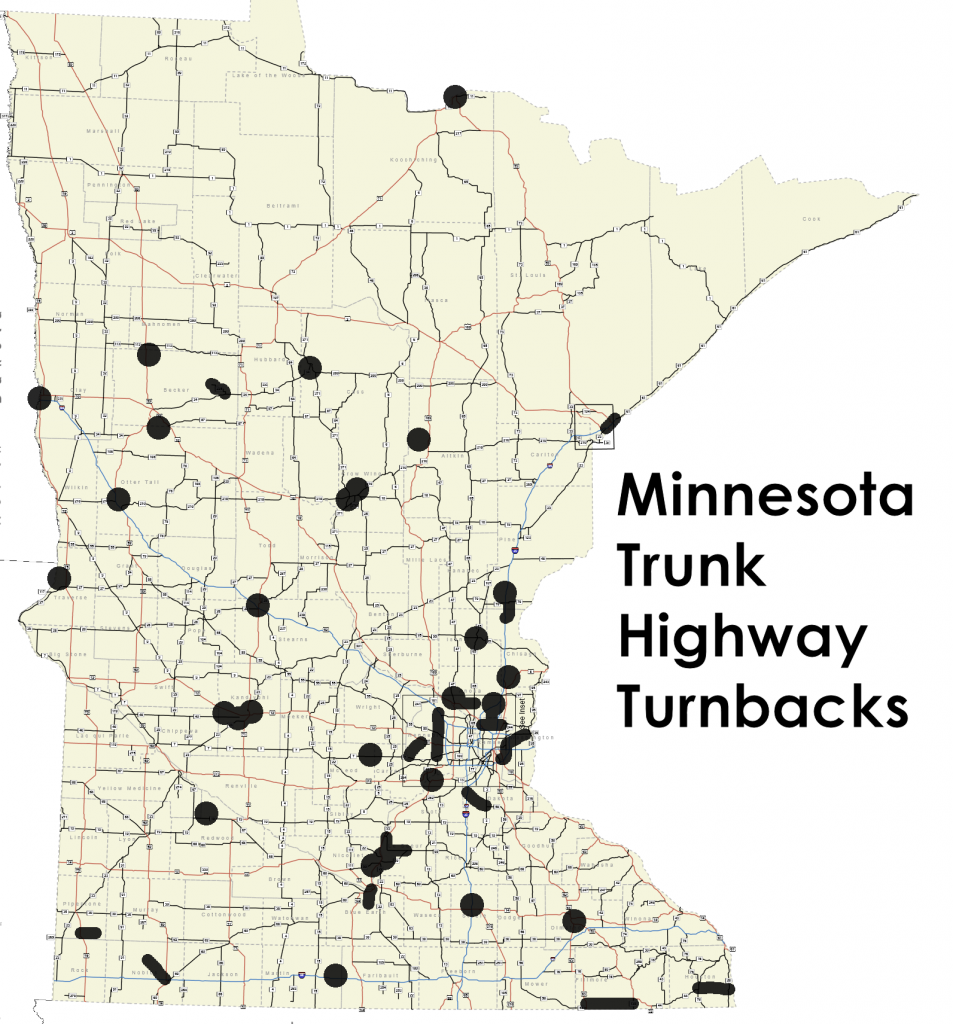 Changes to the Metro

Here’s a map showing changes to the metro since the mid 1950s. This one is a little different in that the turnbacks that have been directly replaced by a different road are shown. 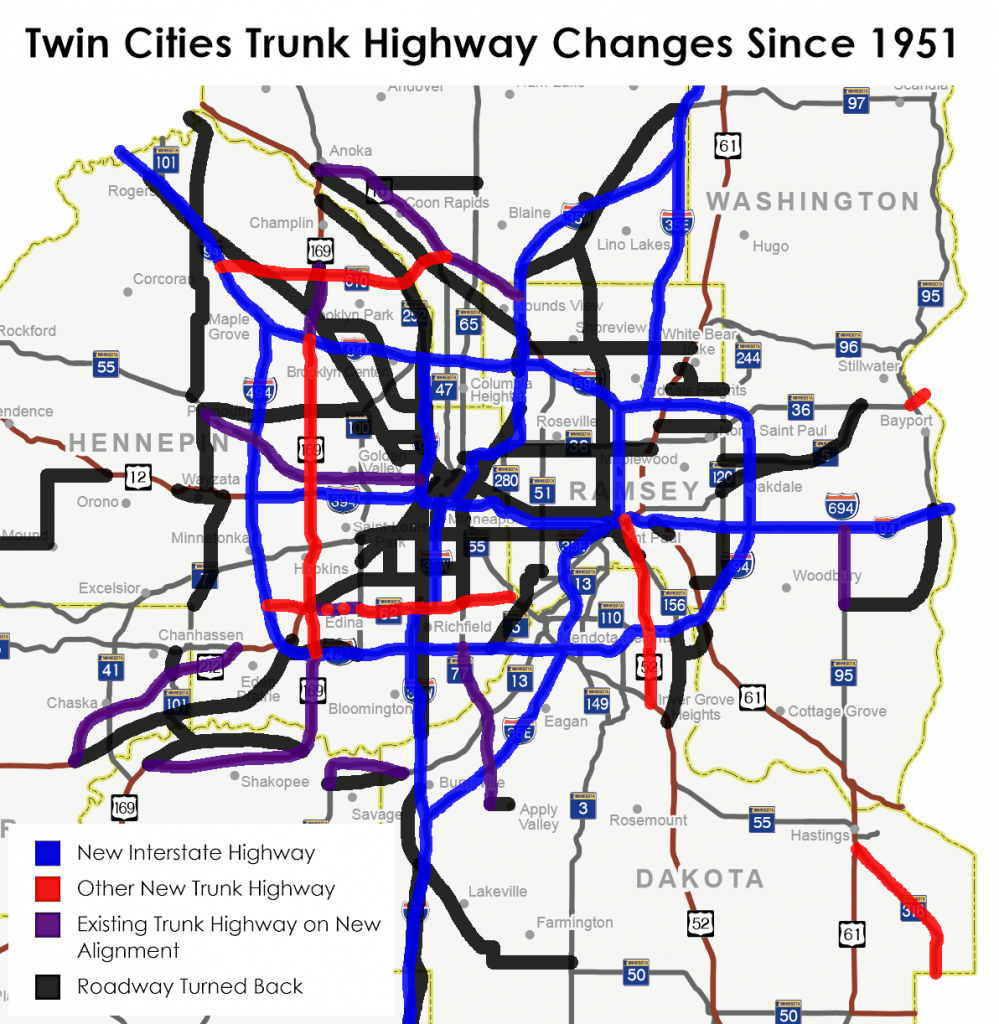 The shift in the trunk highway system in the metro has been dramatic. The biggest change of all was the “Great Swap of 1988,” where Mn/DOT assumed responsibility for CSAH 18 which became US 169, and CSAH 62, which became MN 62. In turn Hennepin County assumed responsibility for quite a few surface streets, including what is now CSAH 81 / Bottineau Blvd, CSAH 25 which was MN 7, and  CSAH 101. The most recent change had been the removal of MN 5 east of Century Ave. Although often thought of as “new” highways, the Shakopee bypass, what old-timers still call “New Cedar,” and the new US 212 were contrived by altering existing routes on paper rather than new legislative routes. 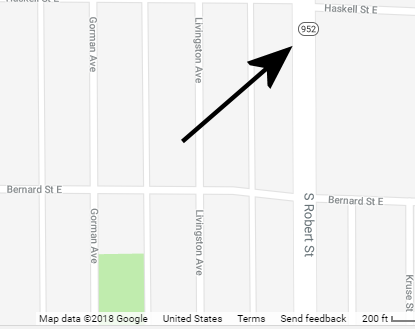 To close off this history, here’s a map showing the results of a recent jurisdictional alignment study, and one I I made for streets.mn a few years ago. A 2014 jurisdictional alignment study was completed to look at appropriate ownership based on traffic volume, functional classification, and system spacing and continuity preferences. It identified 946 miles of trunk highways that should be turned back to the counties or cities, and 235 of county roads that should be trunk highways. Here’s a statewide look, with proposed turnbacks in red and new trunk highways in blue. 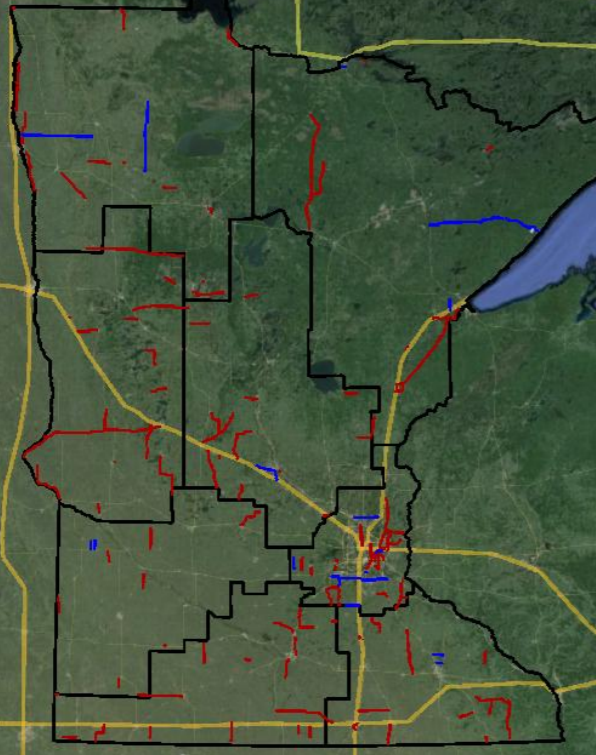 Here’s a potential future map I made of the Twin Cities and was published here in Feb, 2016. It’s based partly on the stated long term goal to have state ownership of all and only principal arterials in the metro, partly on proposals from the counties, and partly on fantasy and speculation. 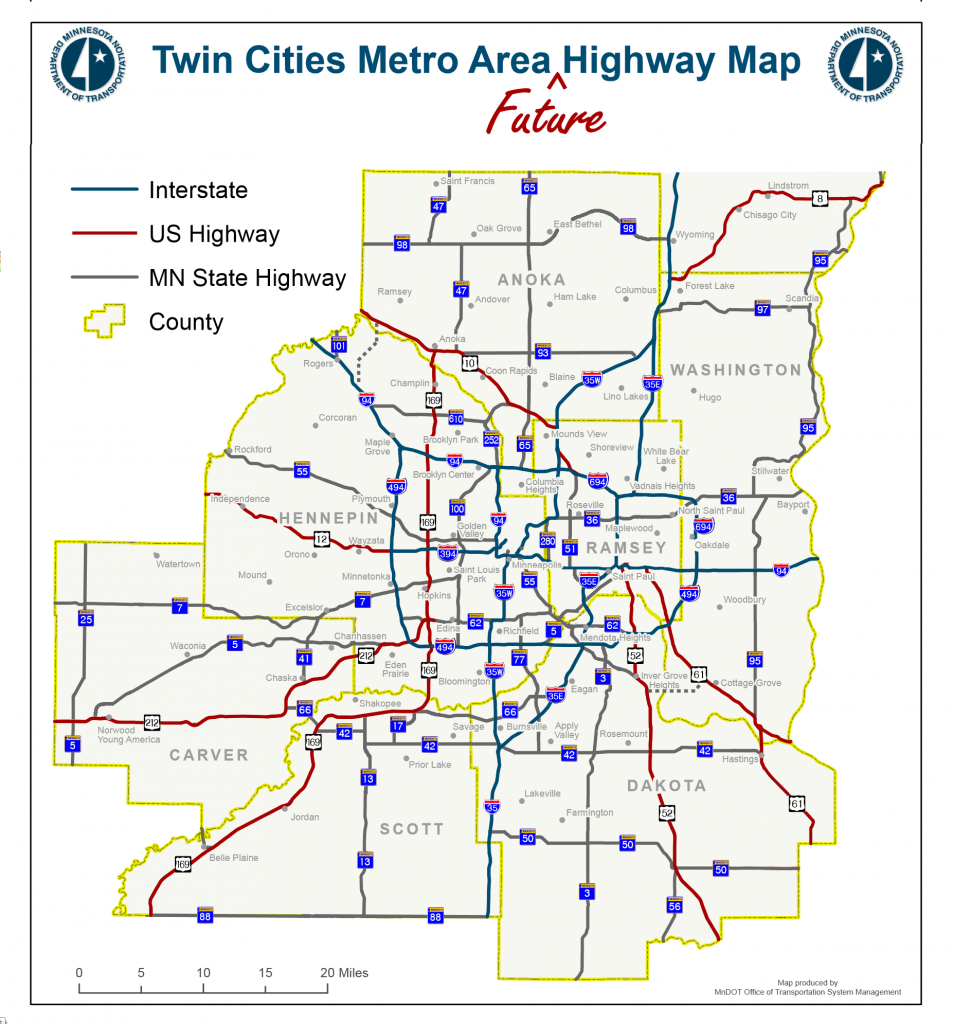 At this point the series was going to jump back and look at the history of our trunk highway system from a different angle; the development of our expressway and freeway system. Instead though it’s time to end it, the initial focus on the highway system as a whole has already doubled in size from what I had planned even as I tried to narrow the scope. Based on feedback received future articles will be more topical and less as a series. But for now I have some space so I thought I’d give a preview and show some interesting photos I collected for what was to have been the second half of this series:

The conception of the interstates and our non-interstate freeways and expressways, from Eisenhower’s road trip fail to the 1960s-1970s building boom 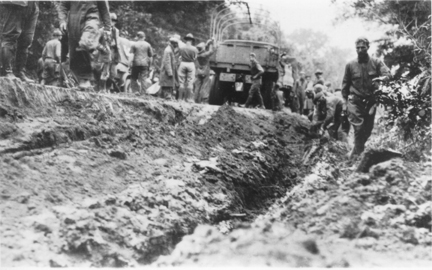 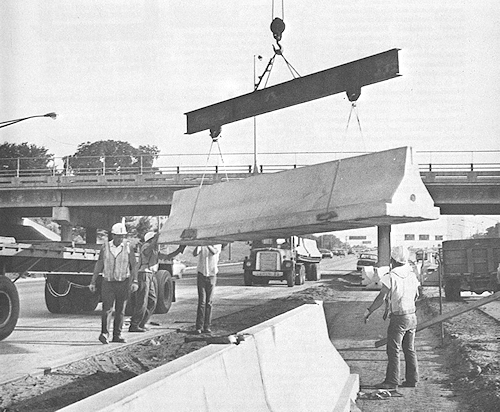 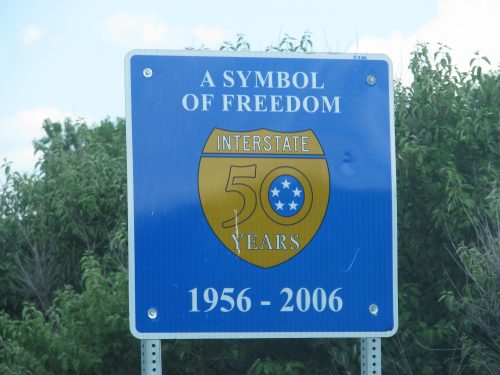 “A Symbol of Freedom”, celebrating 50 years of the law providing a funding mechanism for the interstates.

In response to the 1970s Energy Crisis in a mostly symbolic gesture Mn/DOT turned out the half the lights on I-35W. Internal MDH / Mn/DOT newsletters speculate on a future when only the rich  would still have the freedom that cars provide and what that would mean for our road funding system, and showed off a car that got a shocking 40 mpg. 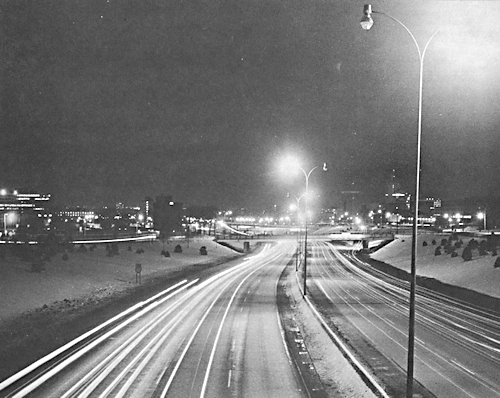 Saving on the light bill, I-35W south of downtown.

The 1970s Traffic Management Initiatives. Even by the 1970s it was clear we lacked the funding and political will to build our way out of congestion, so the enormous costs of congestion to society would just have to be mitigated the best we could. In the early 1970s came an effort to use technology to make the most of existing pavement, with ramp meters, cameras, and speed sensors. Although the first test of ramp meters was on I-35E north of downtown St. Paul, the initial overall  project was I-35W south of downtown with the control center where the Hilton Garden Inn is now. 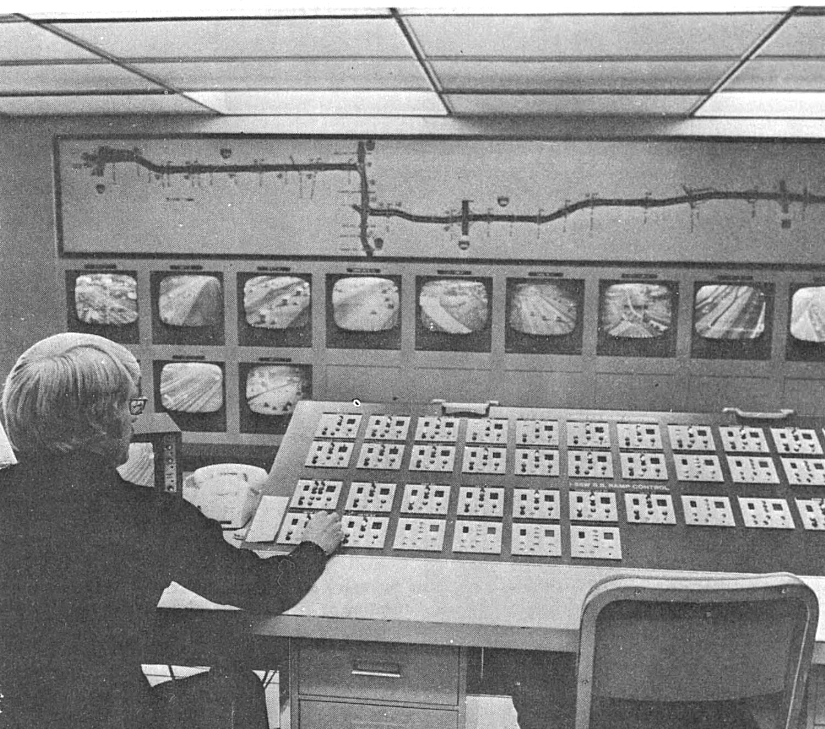 With the unfortunate freeway revolts 1970s came a state law, incorrectly called the “Freeway Moratorium” restricting what could or could not be built in specific corridors. Most of the restricted corridors eventually did get built in some fashion, but effect linger. One of them is narrowness of I-394- it was woefully under capacity for the people it needed to serve from the day it opened. This was due to a policy restricting the corridor to six through lanes. To comply with the law Mn/DOT had a through lane abruptly end on either side of Penn Ave, but no doubt anticipating a backlash and the law being changed made the shoulder wide enough they could restripe it. 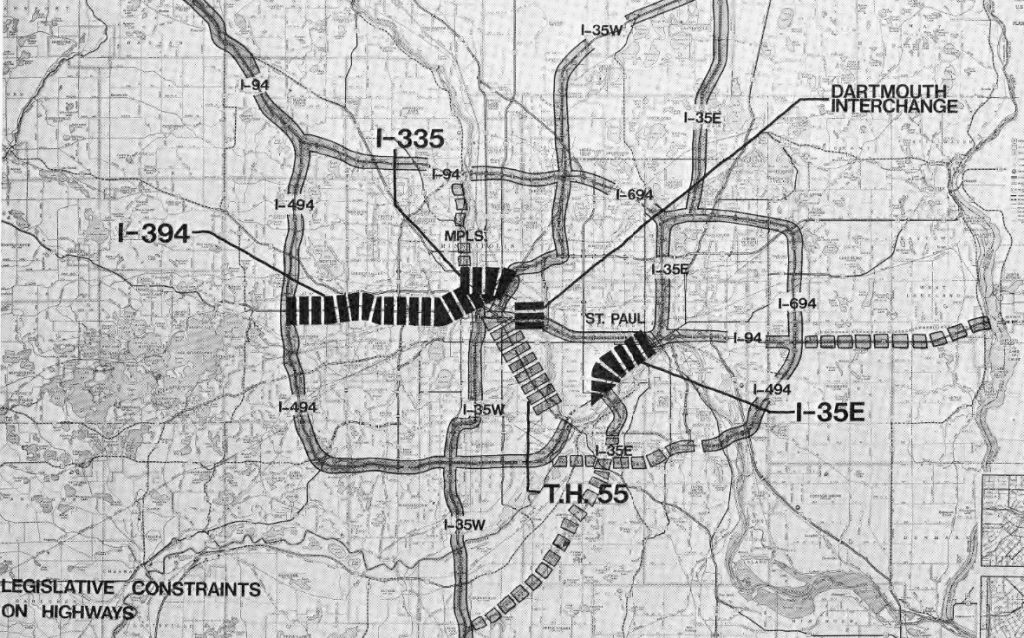 In the 1990s the legislature directed Mn/DOT to look at public/private toll road financing. After the cities of Eden Prairie, Chanhassen, and Chaska made initial overtures, the new US 212 was selected. Ultimately though Eden Prairie reversed course and killed the project by withholding municipal consent when it became clear to the mayor that her constituents were furious about the prospect of it being a toll road. The amount of money and work invested that was lost also killed any momentum for other projects.

Both the first scenic route and the first freeway, Lilac Way / MN 100 has a fascinating history.  Also the broader topic of  driving for pleasure and our official Scenic Byways 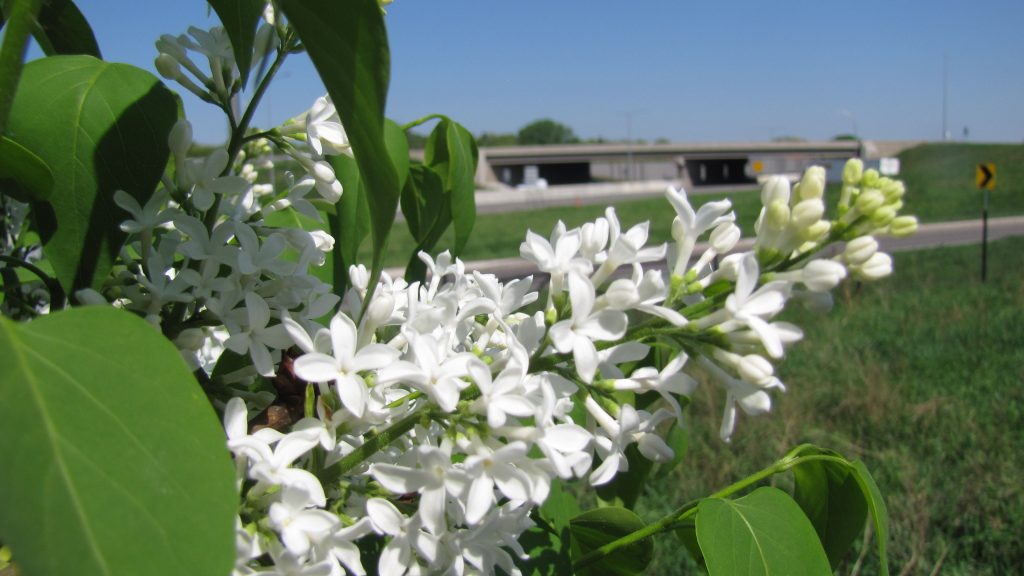 Recently on the forums there was some comments about how it would be neat it would be if we could put down light rail when we were rebuilding I-35W. That was the original plan with the 1980s I-35W megaproject proposal, which would have also removed a general traffic lane on I-35W north of 46th, due to the huge number of  suburbanites that will ride rail but refuse to ride buses. (There was also the idea that light rail could use a Nicollet Ave tunnel or the existing north-south railroad corridor in Richfield and Bloomington for certain sections). That plan went nowhere due to the $1 Billion cost in late 1980s dollars and unwillingness to take the amount of property that would be required. But it morphed into a bunch of smaller, less ambitious projects we’re still seeing today including the Orange Line / I-35W Access Project and the Crosstown Reconstruction. 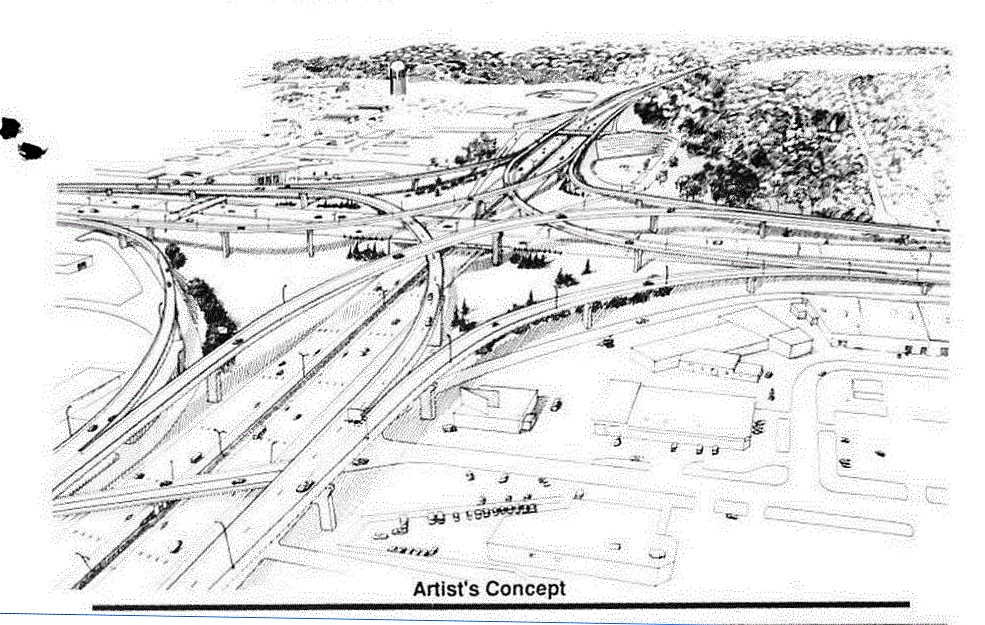 Although this series is at an end, the story of Minnesota’s highways is far from complete.

4 thoughts on “A History of Minnesota’s Highways, Part 6”