The intersection of Lake Street and Excelsior Boulevard at the western edge of Minneapolis, one of the busiest in the entire metro area, is an access point for both city commuters and residents of the West Calhoun and Cedar-Isles-Dean neighborhood, of whom I am one. According to Hennepin County data, over 36,000 vehicles pass through the corridor daily, and City of Minneapolis data indicate that roughly 14,000 vehicles traveled through this intersection a day in 2011.

Congestion has only gotten worse.

Thanks to a recent federal grant, this particular project was able to happen faster than expected (see project website); the first phase of construction took place this fall. 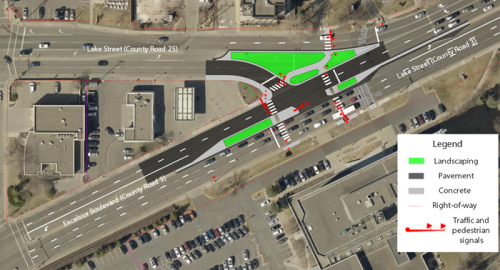 I did an initial walk of the site in October with Drew McGovern, project manager in the Hennepin County transportation design division, and professional engineer Amanda Shotton. McGovern acknowledged that the intersection was “not easy” to cross and said a better pedestrian experience was the primary goal. “With that in mind, we have also created a more compact and channelized intersection allowing more predictable turning movements for vehicles. This may help calm traffic,” he explained, “but it is difficult to quantify. This project should provide a safer and more comfortable crossing regardless of your destination. Also, the addition of ADA-compliant ramps and APS [accessible pedestrian signals] will allow people with disabilities to more easily cross.”

Both construction engineers stressed that permanent signal lighting will replace the temporary structures next spring. “The permanent steel traffic signal and pedestrian poles take at least six months to procure,” Shotton said in an email. “We expect those materials to arrive sometime in March.”

I asked Nick Kim, communications specialist with Hennepin County, how this project is entwined with the Palmisano-commissioned study. He said the county “use(s) long-term plans, studies and coordination with the cities to understand needs and prioritize projects. Specific to this project, the West Lake Multimodal Transportation Study provided intersection improvement recommendations. Those focused on multimodal mobility, access, connectivity and safety near the proposed West Lake LRT [light-rail transit] station.”

Nathan Koster, transportation planning manager for the city, has been working on area improvements here for years. He describes this as a collaborative project between the city and the Metropolitan Council to focus on “non-motorized” transit in this corridor. The intersection directly west (Market Plaza and Lake Street) are among other parts of the West Lake Multimodal Transportation Study slated for some improvements, he said, thanks to that federal grant.

Resident and journalist Michael Wilson has written extensively about the major traffic upheavals caused by this project and others. Forcing a single-occupancy vehicle to wait 45 minutes to get through this corridor may not be the worst thing (and could actually be a teaching tool), but it is problematic that emergency vehicles are being obstructed. The history of this corridor, which stretches back a century, indicate it has been shaped by both railroad and pond (h/t Max Hailperin; check out his extensive walking studies).

I live next to this construction project and wrote about taking the bus from this intersection earlier this year. Since this project will spill into 2020 with finalization of the traffic signals and installed landscaping (plus a gigantic hotel in the works where a BP gas station currently stands), this will be a two-part article, the first focusing on the intersection as it will be over the winter. Then I will make a return trip come spring to document how the intersection will be next year.

Navigating the intersection by foot is easier now, even with ongoing construction, and I can see how the final project will be a total overhaul of a highly trafficked area. After my site walk with the county engineers, I did two separate walkthroughs of my own in different weeks.

Here are some takeaways:

First, just getting to this intersection from my side of Lake Street (Dean Parkway) is a chore, necessitating a dangerous parallel walk right up against traffic as I navigate the open construction trail of the incoming LakeHaus apartment complex. 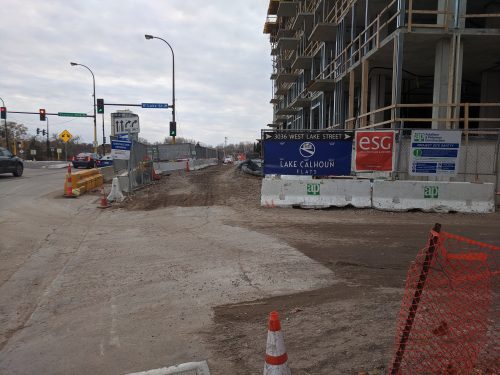 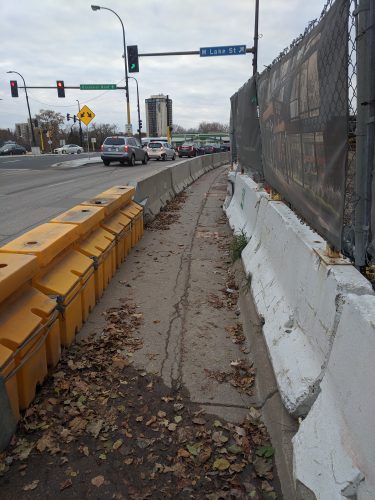 The walk sign on the northern side of the intersection is a bit ad hoc at this juncture, but each time I pressed the button it did signal for me to walk across the intersection. 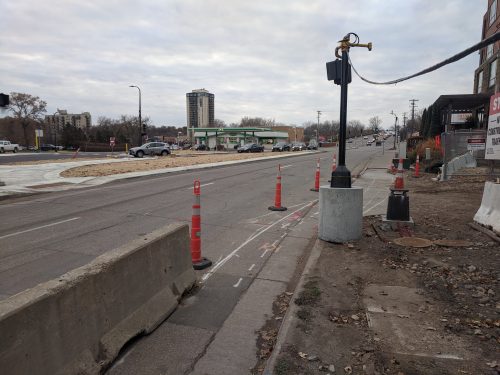 Walk pole on northern side 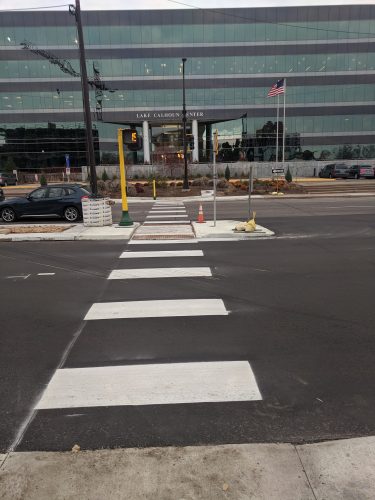 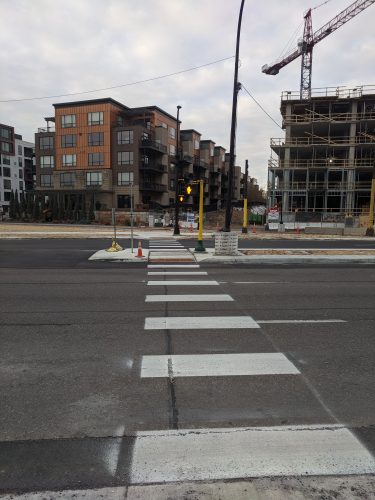 I was able to navigate across the entire length of the intersection in both directions, amazed by my ability to stop all flows of traffic with a single push of a button. At the western end of the new median there is also a crossing toward the BP gas station, but no signal button exists for this crosswalk. (Shotton, the county engineer, said this crossing should become functional over the winter months.) 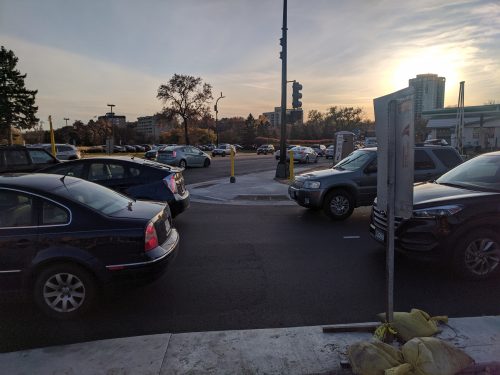 The main issue I noticed with this intersection — possibly due to signal timing — is how traffic still “piles up” across the walking path, much as it did before construction.

McGovern with Hennepin County said that signal timing, a function that the city controls, could help reduce traffic congestion. The focus for the county, he explained, “was to improve the pedestrian experience when crossing this intersection. The changes should have little to no impact, positive or negative, to the overall traffic.” 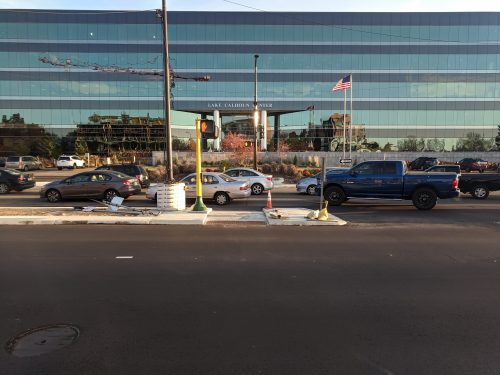 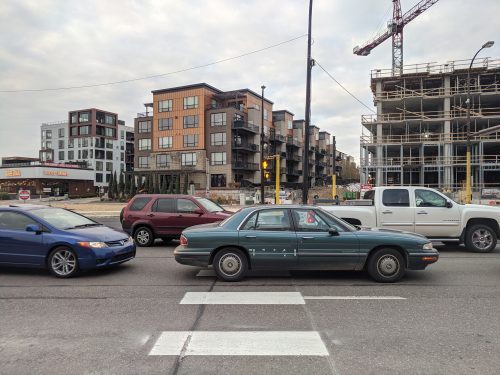 As a resident, a bus rider and a pedestrian, I see this intersection reconfiguration as a vast improvement — even while I acknowledge its interference with the thousands of (mostly single-passenger) commuter vehicles that roll through the corridor daily. The importance of a pedestrian crossway, which does bring traffic to a standstill, is clearly evident in the county engineering design.

I am looking forward to following up this spring with detail about walking this entire intersection, which currently feels more risky than enjoyable.