I’m a huge fan of Judd Apatow – from his TV show Freaks and Geeks to films like 40-Year-Old Virgin and Knocked Up. I’m at least as big of a fan of Amy Schumer’s comedy. So I was excited beyond measure to see that they were teaming up to create Trainwreck.

The movie, which did not disappoint, is a romantic comedy about a reporter named Amy (played by Schumer) who doesn’t believe in monogamy because of her parents’ divorce. She parties, drinks hard, smokes pot and has various one-night stands until she meets Aaron (played by Bill Hader), a sports doctor who she’s been assigned to profile.

In many ways, Trainwreck is the quintessential Apatow movie about coming to terms with the next stage of life. But when I re-watched The 40-Year-Old Virgin a few days later, I was struck by the stark difference in how the two films used transportation and city planning.

In Virgin, Apatow makes deliberate choices about where his characters live and how they get around town in order to show viewers their progress through the character arc. In Trainwreck, those choices say very little about the characters’ personal growth even though they go through a similar character arc. These differences illustrate how cultural attitudes and biases, reflected in pop culture, influence the way we make policy.

(SPOILER ALERT: Stop reading if you do not want to see details about Trainwreck, 40-Year-Old Virgin or Knocked Up.)

The 40-Year-Old Virgin’s tone is set with the very first line of dialog:

“When are you going to get a car?” a neighbor asks Steve Carell’s character Andy as he leaves for work.

“I can’t afford it!” the neighbor says as they laugh together.

After Andy leaves, the neighbor says, “That guy needs to get laid.” We see Andy biking happily down neighborhoods streets, but he’s quickly in strip mall territory. Cars honk as he crosses a five-lane stroad to get from an ill-designed sidewalk to the big box electronics store where he works.

The joke isn’t that there’s a commercial district without so much as a crosswalk for cyclists and pedestrians. The joke is that pedestrians and cyclists are on a road where filmmakers and audiences clearly don’t think they belong. When Andy later marches across that same road to see love interest Trish, it’s as if the lanes of traffic are a fairy tale moat he must cross to find true love. How brave he is to venture into hostile territory! 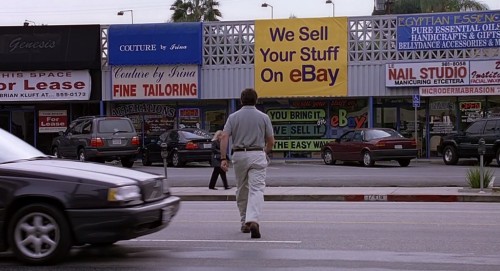 Where’s a HAWK Signal when you need one? (Universal Pictures)

Scenes like these mean Andy’s bike isn’t a transportation choice; it’s sexual insecurity on wheels. The bike serves as a visual shorthand for the character’s naiveté. He comes to be ashamed of it in front of girls and mocked for it by his coworkers, just as he is with his virginity:

“You know what, I’m not the only person in the world who rides a bike,” Andy tells his coworkers.

As Andy matures, we see him learning to drive from his girlfriend. Self-sufficient adults use cars, the movie says; bikes are just for the poor and immature. 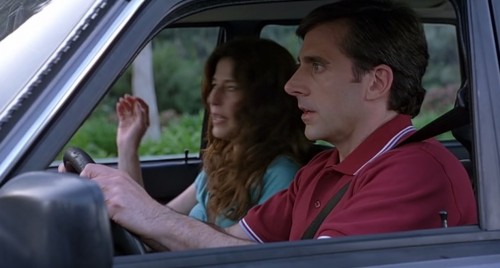 “I’m still confused. Tell me again how I’m stuck in traffic but not part of the traffic problem.” (Universal Pictures)

The tragedy is that bikes are an extremely smart financial decision for people like Andy who work at lower-paying retail jobs. Building infrastructure that allows employees to cheaply get to work is a vital part of ensuring upward mobility. Public transit doesn’t fare any better in Virgin. The only bus in the movie is just a mobile billboard that serves to tempt Andy with sexual thoughts.

Housing choices are similar metaphors for the characters’ stage in life. Andy lives in an unremarkable apartment building. His neighbors are elderly and, as mentioned above, lower income. The only person with a single-family home is Trish, a mother and the only real grown-up in the entire movie. Once again we see that there’s one choice suitable for responsible adults and another for everyone else. 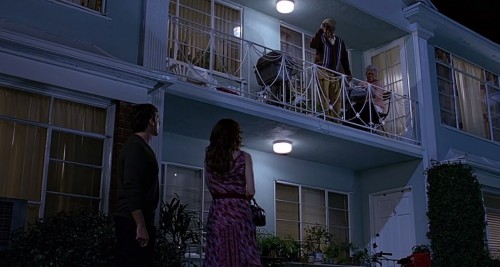 Typical renter. Going on a date when he should be at the neighborhood association meeting. (Universal Pictures)

Trainwreck, taking place as it does in New York, shows many more types of transportation than The 40-Year-Old Virgin. The beginning of the movie shows Schumer’s character Amy taking a ferry home after a one-night stand. She takes cabs throughout the city and walks all over the place. 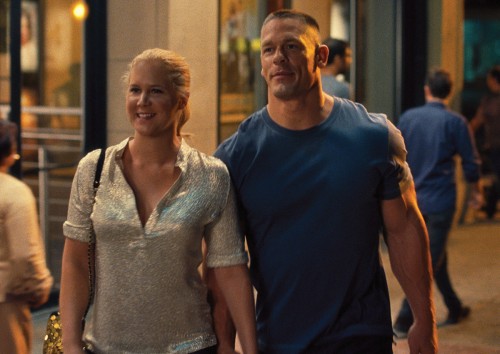 “There is no I in TOD, but there is an I in TIF.” (Universal Pictures)

As in Apatow’s other movies, we meet the protagonist in a state of immaturity. Yet her transportation choices don’t say anything about her stage in life. Her love interest, Aaron, uses the same types of transportation as Amy even though he’s the very epitome of responsibility. He’s a surgeon and friend to stars like LeBron James and Amar’e Stoudemire. He’s an award-winning volunteer for Doctors Without Borders. He winds up with a profile in Vanity Fair.

There’s even a touching scene of the two riding a subway together. Its seamless integration into the movie echoes a story Schumer told about coming up with one of her funniest jokes during a chance subway encounter. In Trainwreck’s world, transportation isn’t about your station in life; it’s about moving from place to place. 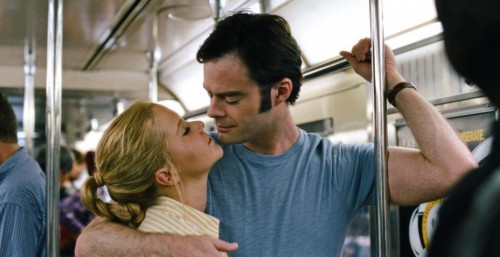 They could gaze into each other’s eyes longer if financial pressures hadn’t cut two stations at the end of the line. (Universal Pictures)

Housing is similar. Trainwreck flits between the city where Amy lives and the suburbs where her sister lives. The sisters are at distinct stages in life, and the places they live are every bit as distinct in terms of setting. But the two aren’t necessarily connected. Once again, we can see this through Aaron. He’s well off and chooses to live in a nice apartment instead of the spacious single-family home we’d expect in other Apatow films.

None of this shortchanges the film. New York comes to life in Trainwreck every bit as much as Virgin’s suburban strip malls. But the details are about creating a living, breathing place, not about personal development.

The division between urban Schumer and suburban Apatow isn’t absolute. Virgin has little love for big box retailers, and Ben and Alison wind up living in an apartment in Knocked Up. On the flip side, Amy comes to appreciate the suburban life her sister is living in Trainwreck.

But those are the exceptions.  Overall, it’s hard not to see Schumer’s hand in the differences between Trainwreck and Apatow’s usual movies. Not only did Schumer write the script, she’s a Manhattan native who lived there until she was 12. After college, she returned to New York City. The urban environment is her home.

Meanwhile, Trainwreck marked the first time Apatow directed a movie he didn’t write. He was born in Queens but raised in the Long Island hamlet of Syosset, not far from where Schumer spent the second part of her childhood. He moved to Los Angeles after high school and has long been a part of the West Coast film industry. Car country may not be his native environment, but it’s where he’s spent the bulk of his life.

You can see the way these experiences shaped their choices in the different endings of Trainwreck and another Apatow movie, Knocked Up. The latter movie closes with a panning shot of the couple’s sensible red sedan after it has left the hospital and is driving on a highway far from the places where hospital patients actually live. The transition from hospital to sedan to freeway drive home symbolizes Ben’s increasing maturity. 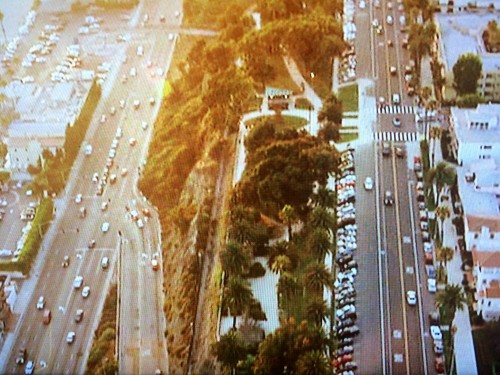 Although MnDOT would have a field day adding up the lost time costs of his self-imposed 12 mph speed limit. (Universal Pictures)

Trainwreck, on the other hand, illustrates the maturity of Amy’s and Aaron’s relationship by showing them walking New York’s active streets past the beggar she’s friends with and into her apartment. Schumer demonstrates her character’s growth by the way Amy literally and metaphorically lets Aaron into her life, but Amy remains in the same place geographically. Once again transportation and the urban environment are just scene setting. 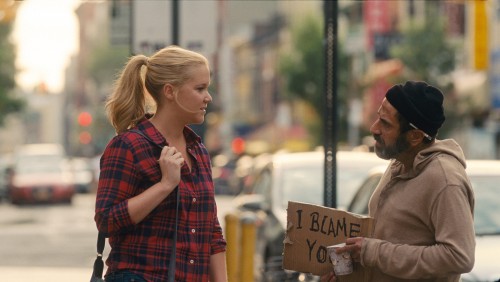 Another serendipitous encounter on a vibrant street. (Universal Pictures)

In this respect, Trainwreck is very much in the mold of other New York productions, from Friends to When Harry Met Sally. While New York films are transportation agnostic, movies from flyover country simply don’t show white collar professionals taking the bus or train. Even Eminem’s poverty-stricken character in 8 Mile only takes the bus because his car is broken. 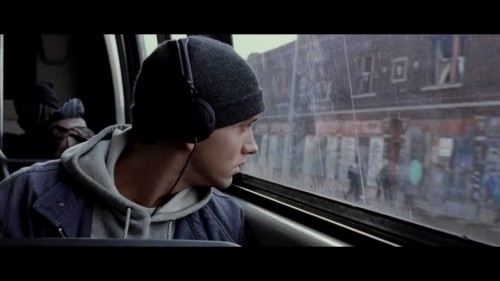 “<sigh> They had to put the Gold Line in the burbs.” (Universal Pictures)

There’s a danger to viewing walking, biking and transit as “normal” only when it’s done in megalopolises. As in the movies, transportation choices and living arrangements can come stand in for a person’s character, not just how they choose to live and spend their money.