Summer is waning with less than two weeks until the start of the Great Minnesota Get-Together and three until Labor Day weekend. Election season will be heating up, too, and the Saint Paul side of the streets.mn Voter Guide continues to expand with responses by mayoral candidate Pat Harris.  You can find all our election related content in the 2017 Voter Guide.

Quick Impressions of the Indianapolis Cultural Trail by Eric Saathoff (see Ken Avidor’s detailed ride along the trail here) and some questions for Saint Paul’s Capitol City Bikeway saying “There’s no reason [Saint Paul] downtown needs to remain as car-dominated as it is today. The streets of Indianapolis were alive, and there were new restaurants and businesses all over the place. Downtown movie theater? Check! Our downtown, by comparison, is both much smaller and much less active.” Plus many photos to guide you along the Cultural Trail and other Indianapolis sights.

Monte Castleman continues his story with The Stillwater Bridge Story, Part Five (see Part 1, Part 2, Part 3, and Part 4) to coincide with the opening of the new bridge. This post covers the construction of the bridge and its grand opening to vehicle traffic with many photos and history of the project, too. 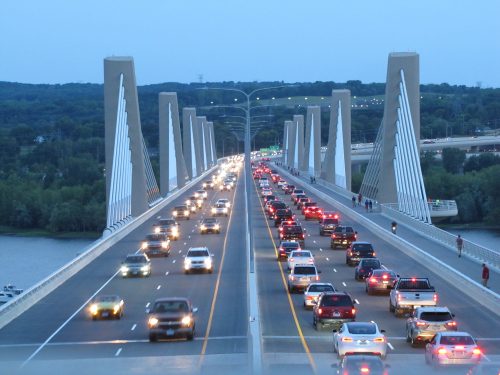 From the Fairest Creatures We Desire Increase: Notes on MetroTransit’s Fare Raise by Dan Choma looks at transit funding perceptions and reality: “The transit fare hike is now a reality but this shouldn’t close the discussion on how to better fund our transportation system. Many of the current funding mechanisms are clumsy, blunt instruments that are loosely tied to the consumption of transportation services. The rise of technology-enabled mobility services like Uber and Lyft (and with autonomous vehicles on the horizon), we have a policy window to discuss policies to steer transportation policy towards desired mobility and societal outcomes. We cannot keep having the same discussions around declining revenues, force the new revenues to come on the backs of disproportionately low income people and expect the problem to go away.”

With a fine Upworthy-worthy title, Tom Basgen tells the story of I Got Kicked Out of My House — You Won’t Believe What Happened Next! when his “landlord who lives in Plymouth stumbled across an article describing the ‘hot’ market for housing in the Twin Cities and it was simple math for him after that: Sell the house for a good chunk of money and lose the liability/responsibility of being a landlord. He offered me a sporting chance to buy the house before putting it on the market, but buying a house isn’t a decision you make on someone else’s schedule.  I moved.  The house had bids the day it hit the market.” The resulting experience with the rental market helped spur this call to action to support better policy to help build and maintain affordable rental housing in our cities.

A Tale of Zoning Manipulation in Saint Paul’s Tangletown also by Tom Basgen describes an “invisible wall being built in Saint Paul to protect the wealth of a small group of private homeowners” which “starts where it always starts, with concerned neighbors. Save Our Saint Paul Neighborhoods (SOSPN) is an organization that conjured itself from the well heeled shadows of Tangletown in the Mac-Grove Saint Paul in 2014 to save a quaint single family home on a big lot from becoming two quaint single family homes on decently sized lots. The group uses phrases like “historical value”, “sustainability”, and “neighborhood character” without attaching any concrete values to their claims.” The group has proposed exclusionary zoning in the form of the Tangletown Conservation District which will be reviewed by the Saint Paul Planning Commission. 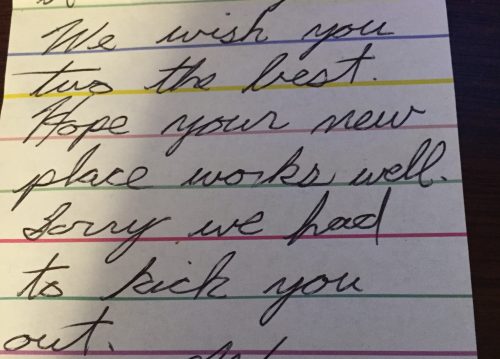 “We wish you two the best. Hope your new place works well. Sorry we had to kick you out.”

Walk: Walking in Western Como is the next alphabetical walk by Max Hailperin as he continues to walk all 87 Minneapolis neighborhoods.

Map: Map Monday: Existing and Planned Twin Cities Rail versus Population Density via Twitter where “The resulting conversation on Twitter was a critical, as it should be, of the way that the region’s light rail investments skip all the most densely populated parts of the Twin Cities, most especially North Minneapolis and Uptown.” The rich discussion in the comments includes some additional maps and deep knowledge about area projects (and a few other cities, too). 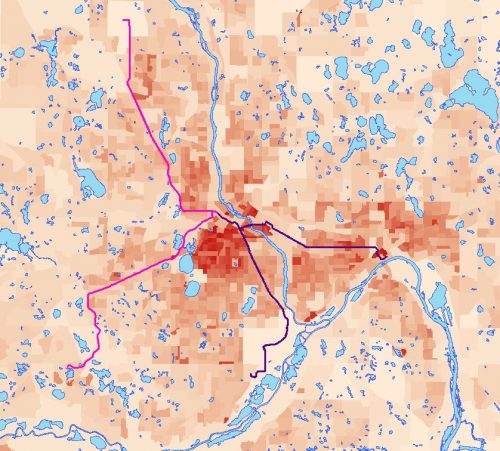