Having recently moved away from downtown, I’m spending more time in other parts of the city, which means I find new things to critique/complain about. Case in point, a problematic intersection that stands between my new home and the closest grocery store: Cedar Ave & East Minnehaha Parkway. 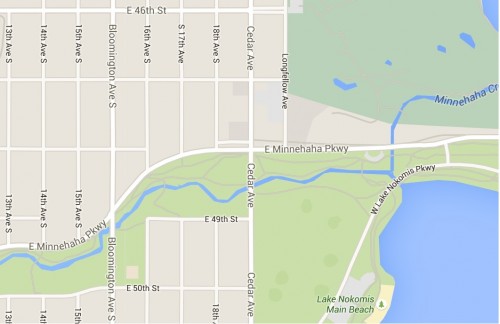 Let’s set aside for the moment how this intersection works for cars. Not that there aren’t issues there, especially with left turns off the parkway, but they aren’t really what I want to talk about, as cars get to move through here pretty readily. So much so that they often seem to be moving too fast.

Instead, I want to focus on more basic issues, about which there really shouldn’t be much disagreement. For example, this is obviously unacceptable: 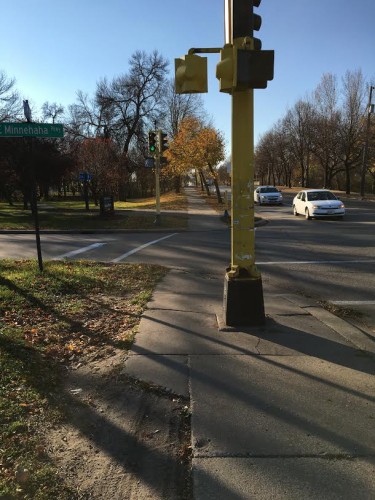 Clearly, there’s not enough sidewalk space to navigate around that signal pole, on the east side of Cedar just north of the parkway, especially for those on two or four wheels. Despite the little added triangle of cement sidewalk, you can see the wheel tracks in the dirt where the desire line has worn away the grass. The triangle itself suggests that someone realized this and tried to put in a temporary fix. How long ago was that? It does not look like particularly new cement.

Continuing maybe 100 feet north on the same sidewalk, the issue repeats itself (apologies for the slightly blurry night photo): 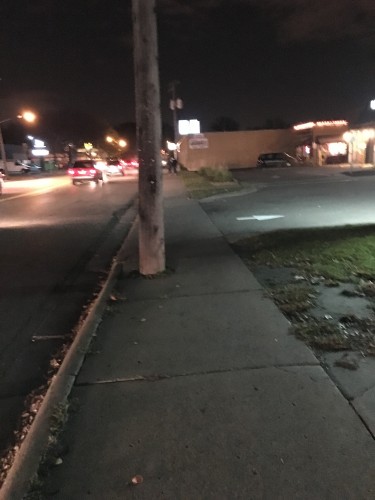 And again, the grass is the victim of feet and wheels forced off the walk.

Moving across Cedar, this is kind of an issue too: 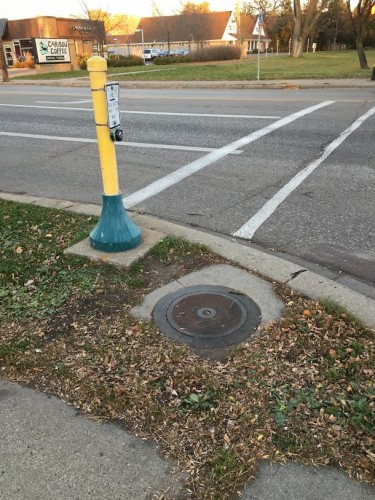 There are no automatic walk signals at this intersection. If a user of the sidewalk wants to get a walk signal, she has to push the beg button. But the sidewalk does not connect to the button. So far, I’ve only been through here when there was no snow, so yeah, it’s not hard for me to step off the sidewalk and reach the button. But will that be the case when there are big mounds of snow? And how does that work for someone in a wheelchair? And then there is the issue of standing on a manhole cover while you wait. The thing seems to be solidly in place, but you never know.

Meanwhile, on the other side of the Parkwayis one of the area’s well-used bike and pedestrian trails, which also does not get an automatic walk cycle to cross Cedar. I’m not sure what the guidelines are for when non-car users should be automatically included in signal cycles, but the amount of non-motorized traffic here sure seems like a strong candidate for inclusion.

The good news is that my Twitter complaint about beg button island found its way to a Park Board Commissioner, who told me that this and other crossings are under discussion. I’m looking forward to the outcome.

24 thoughts on “This Intersection Needs Work”