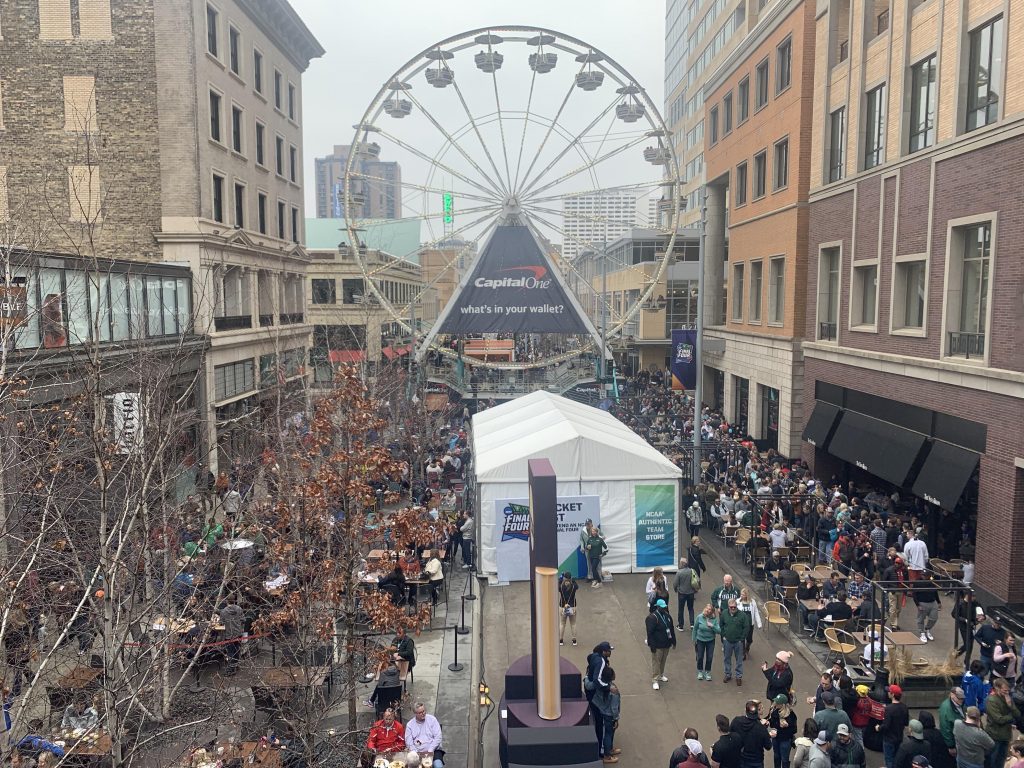 Can we just keep the Capital One Ferris Wheel here? Photo: author

During the NCAA Final Four, Nicollet Mall achieved what the planners had only dreamed of. It was a packed, vibrant hive of pedestrian activation with visitors shooting hoops, dining outside and even riding a Ferris wheel.

The festivities ceded the 24-foot-wide bus lanes to pedestrians, and the activities and outdoor dining attracted crowds. Months later, I am contemplating how Nicollet Mall could be engineered permanently for better street activation. 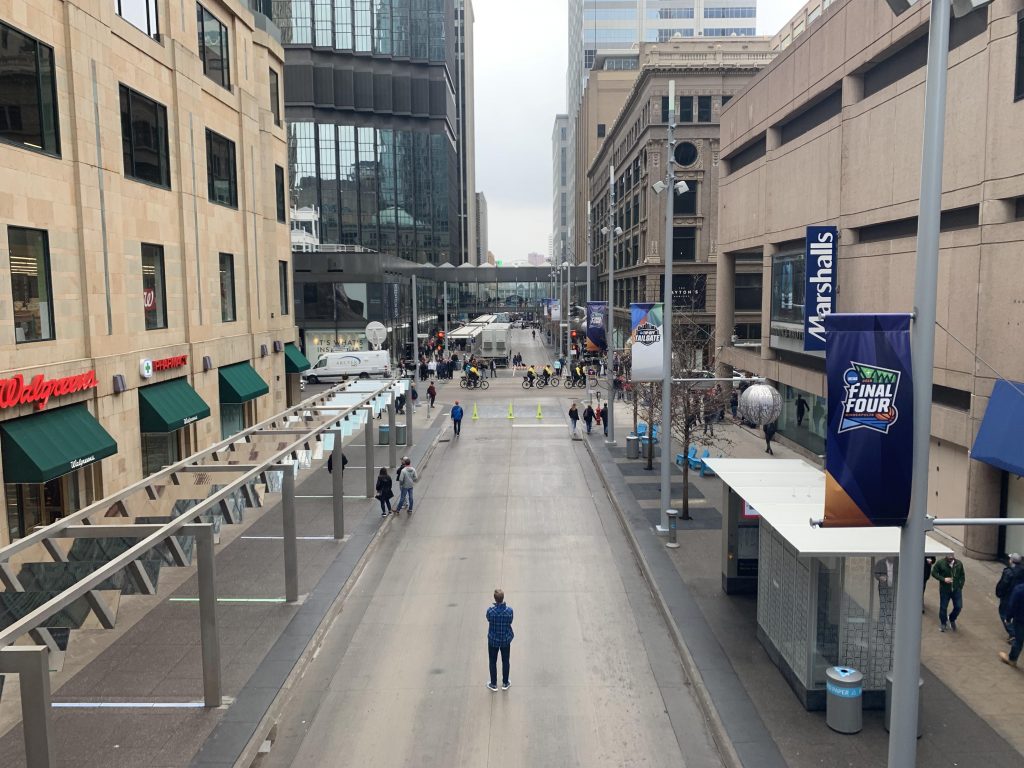 As I approached the festivities, I captured this brave soul standing in the middle of a bus lane. Photo: author

Let’s start with the bus lanes. The situation is better than when the city allowed taxi cabs on Nicollet, but we are still devoting 24 feet — plus bus shelters — to buses on an 80-foot wide corridor. I am a fan of buses, but having quick, on-time bus service doesn’t work in a space that is supposed to be dominated by pedestrians. (It’s a mall!)

I am writing elsewhere about my hope for a future under- and above-ground metro line connecting downtown Minneapolis to downtown St. Paul and the MSP Airport. With a metro line going through downtown, it would make sense to have two stops on Nicollet Mall and convert the mall to a pedestrian and micro-mobility space, making access to those two stations easier for people on bikes and scooters. Buses can be routed to have stops by the stations, but there would be no need to duplicate the metro’s route with above-ground buses.

I measured the width of Nicollet Mall, building face to building face, at select blocks using a laser measurement tool. Most blocks are about the standard 80 feet wide, depending on building setback. The width at Eighth Street, at U.S. Bancorp Center, is about 91 feet. 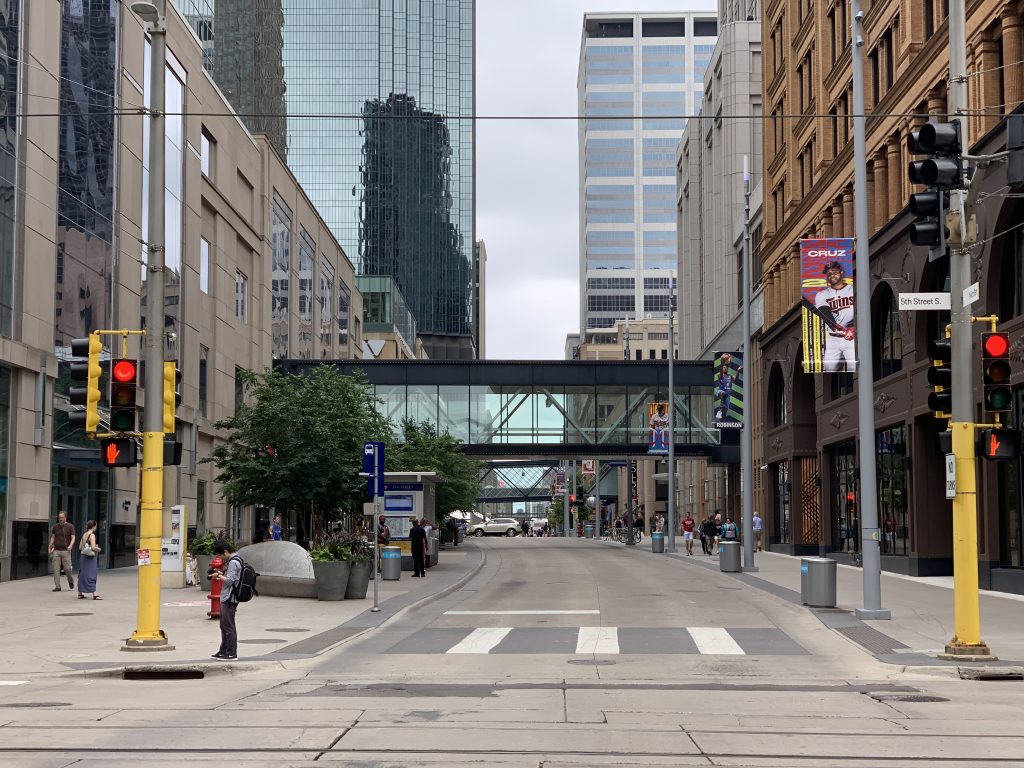 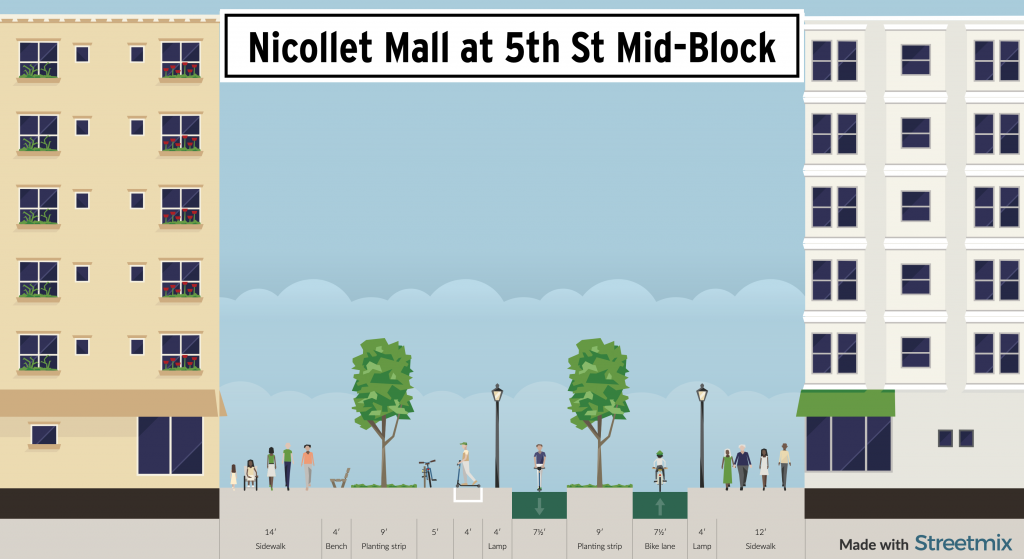 If we keep the current improvements to Nicollet Mall, one easy solution to create bike and scooter lanes — and softly discourage crossing those lanes — would be to add planters to the current 24-foot-wide bus lanes. Other tree planters on Nicollet are 9 feet square. One can imagine trees in wood and concrete planters dividing the bike and scooter traffic. The planters would also softly discourage pedestrians from crossing except at crosswalks at each end and mid-block. 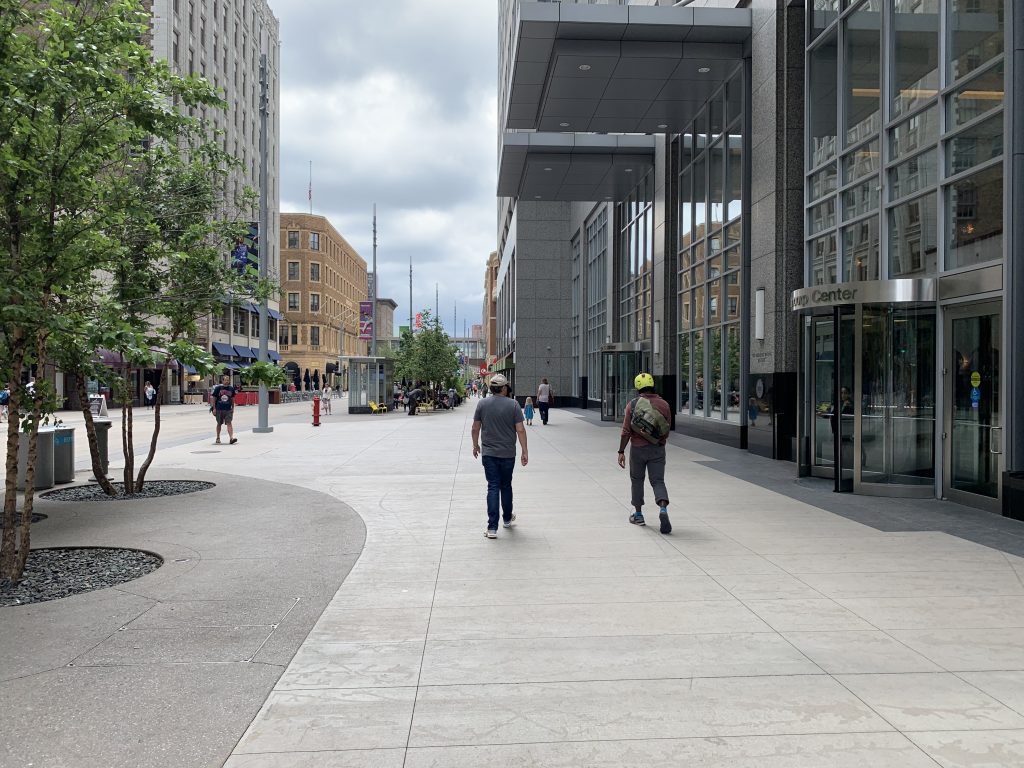 We can also quickly add more scooter and bike parking to encourage carbon-free trips and help tamper the chaos of scooter parking. 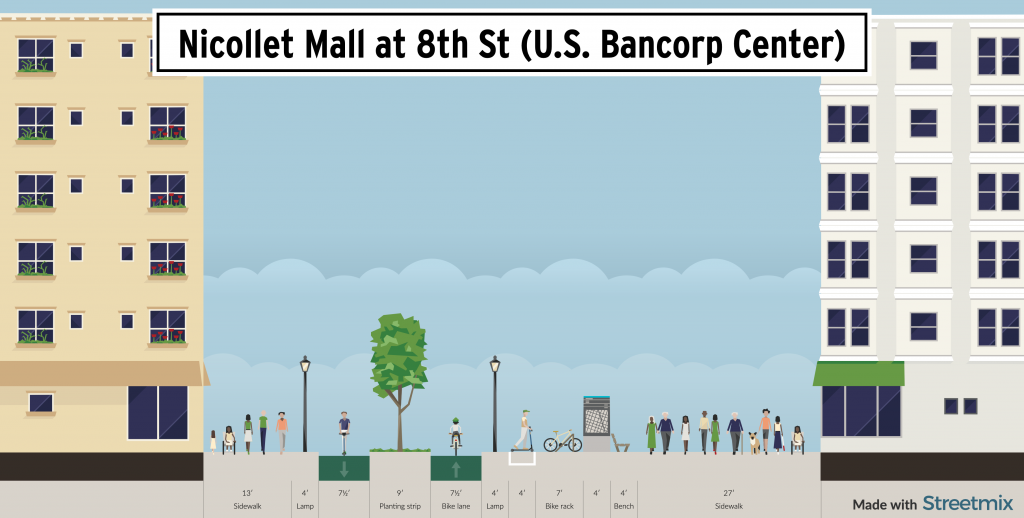 U.S. Bancorp Center has a deep setback that gives space for art or other pedestrian activation. Graphic: author

At Eighth Street, U.S. Bancorp Center gave itself a 10- to 11-foot setback that allows a large space for street activation. Food trucks could bid on spaces to serve at prime times during the year. A reimagining of the Mall could add more public art here or wayfinding signage like we see in other cities and on some college campuses, such as Macalester in St. Paul. 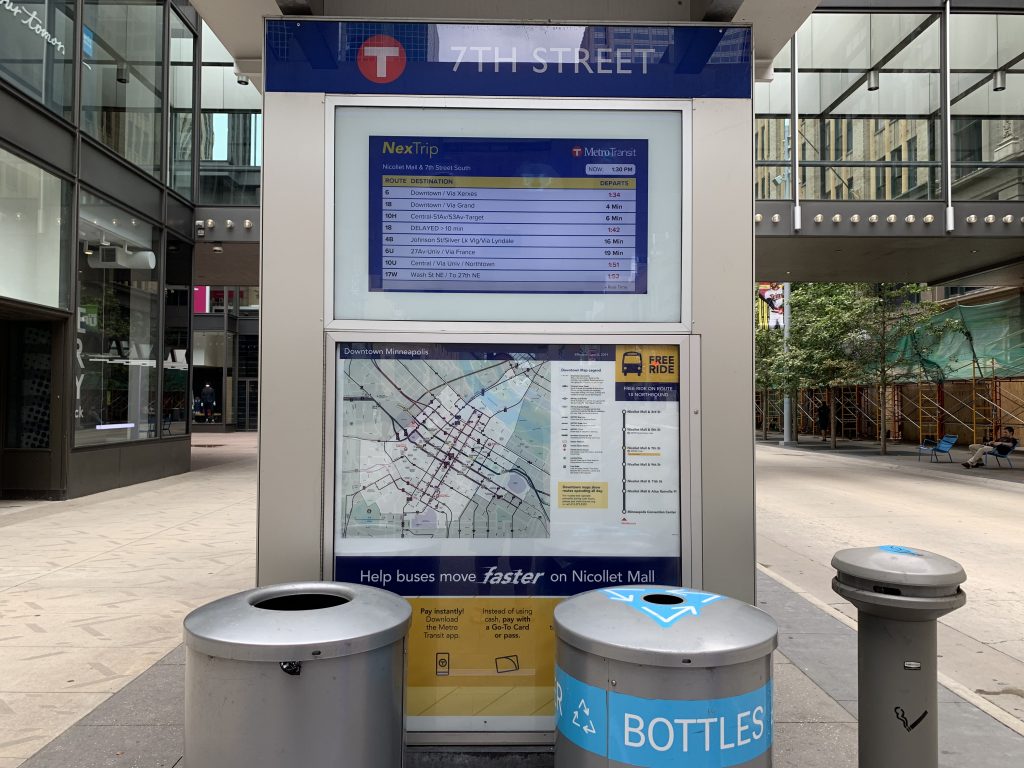 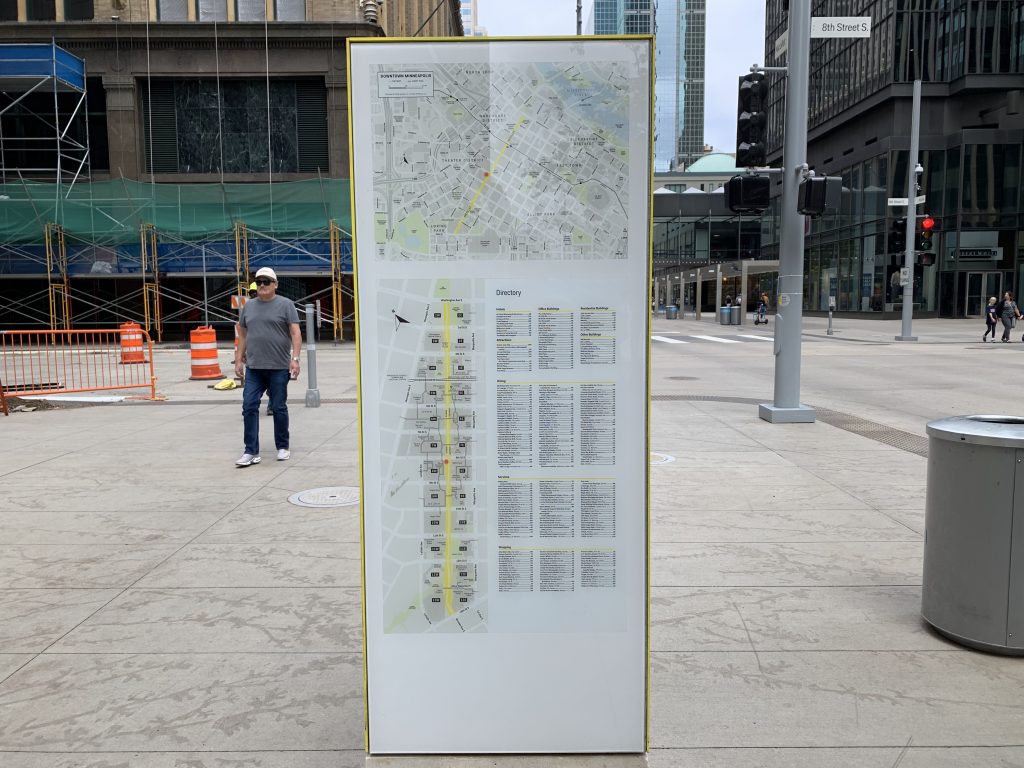 With five larger signs over a mall that is approximately 4,950 feet long, the nearest sign is on average over 400 feet away. It would be helpful to install larger signs with more readable type and maps, connected to existing electrical, twice on every block. That reduces the walking distance to find a wayfinding sign to about 250 feet.

Also notice that the Metro Transit shelters clearly label where somebody is right now (“7th Street”), while the #OnNicollet signs give no such unambiguous direction. 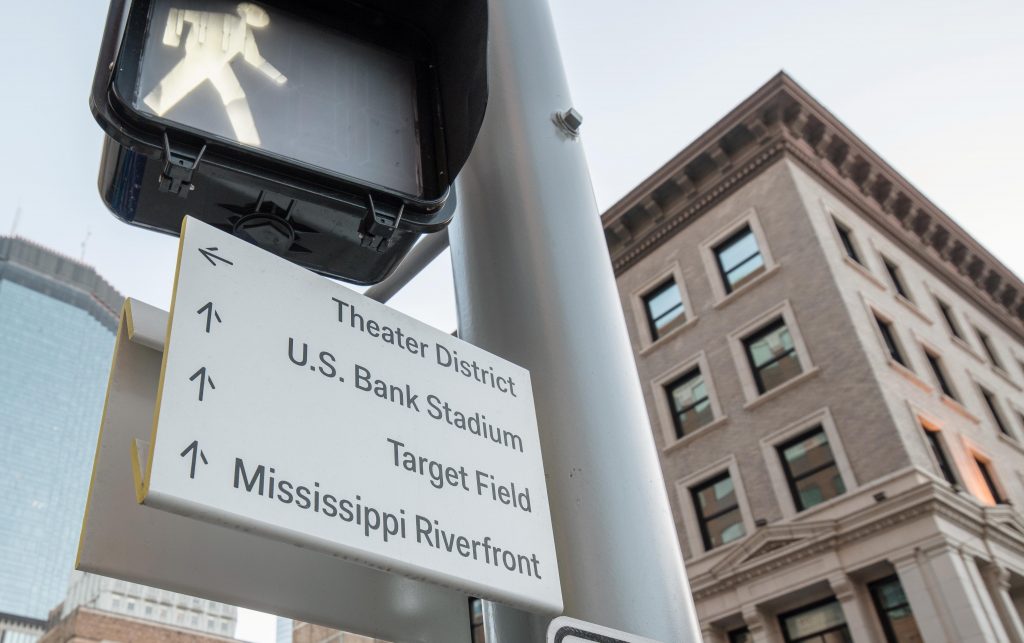 These ideas for improving Nicollet Mall are possible if we could build a more efficient underground metro system. The street has only so much right of way for bus lanes. It’s only a matter of time until the need and the funding for underground metro meet. 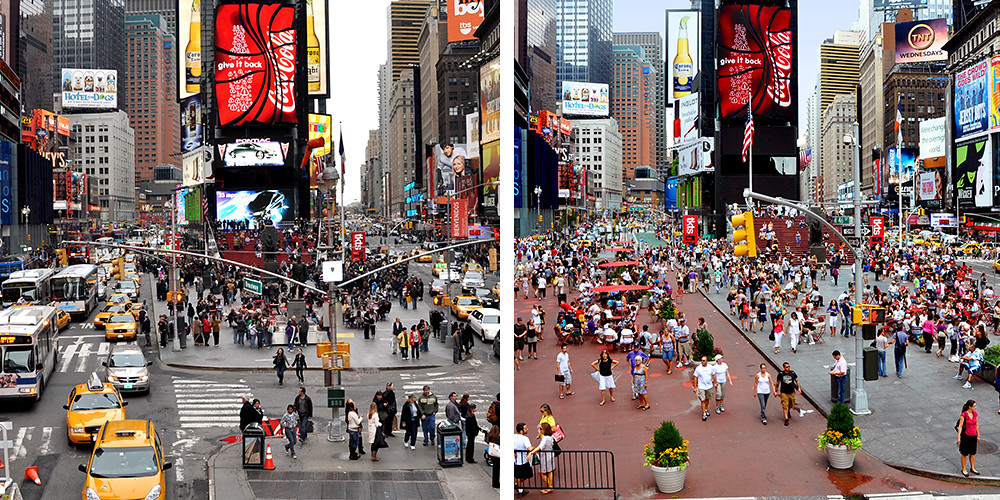 Before and after: Broadway and Times Square. Photos: City of New York

Until then, my friends, share your visions for a more pedestrian-friendly Nicollet Mall.

What would you like in your ideal Nicollet Mall? What top three destinations on the Mall would you recommend to a visitor? Share your artistic dreams and scooter parking nightmares in the comments.